Did your stolen bike wind up for sale on Offerup? If so, this article is for you.

Online sales sites like Facebook Marketplace, Offerup, and Craigslist are all fertile grounds for bike thieves and bike fences, mainly because they are fast, free, and relatively anonymous places to sell stolen goods with little to no oversight.

Offerup is by far the worst of these offenders, and has been ever since it started operating. So we aren't surprised your stolen bike wound up there.

(And before we being: All the bikes and images in this ad were grabbed completely at random - we're not implying or saying these sellers in these example images are selling stolen bikes - they were just the random ads we grabbed to create this article.)

So: Here's what you should do if your stolen bike winds up for sale on Offerup:

Offerup will not lift a finger to help you, period. Don't even try. You can click 'report this ad' or 'report seller' but I can pretty much guarantee you literally nothing will happen. There's pretty much nobody home at Offerup support. You can email them, tweet them, hell, send them a telegram for all we care - we are telling you now that nothing will come of it.

Next, Take a screenshot of the ad and all the accompanying photos

The first thing you want to do is to take screenshots of the ad, including all of the individual photos of the bike, and save them somewhere on your computer for later.

You need to do this because thieves often remove and relist their Offerup ads with regularity in order to avoid detection. So it is important you grab screenshots of the ad while it is still there - i.e. before the bad guy pulls the ad down and you can't see it anymore. 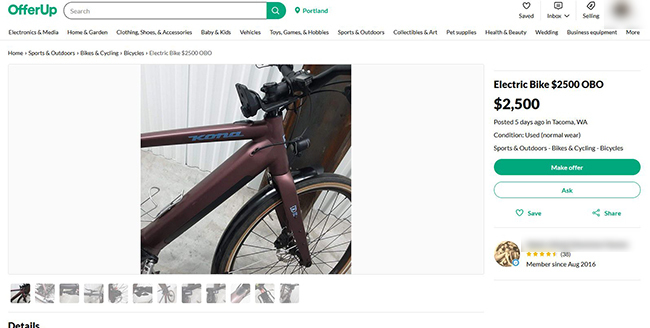 We recommend you do this on a desktop (instead of a mobile device) because you'll get larger, more detailed images, but you can work with whatever is available to you.

On Windows, you can either use the Snipping Tool to grab and save an image, or you can press the Windows + Printscreen keys at the same time which will save a screenshot to your 'Screenshots' folder, which is typically found in C:\Users(your username)\Pictures\Screenshots

On a Mac, you can take a screenshot as described here - basically press keys Shift - Command - 3 all at the same time, and this will save a screenshot to your desktop.

Take a screencap of the ad itself, then be sure to click through to each one of the images posted with the ad by clicking on the images below the main photo. Take a screenshot of those too, so you capture the maximum amount of detail from each and every image. 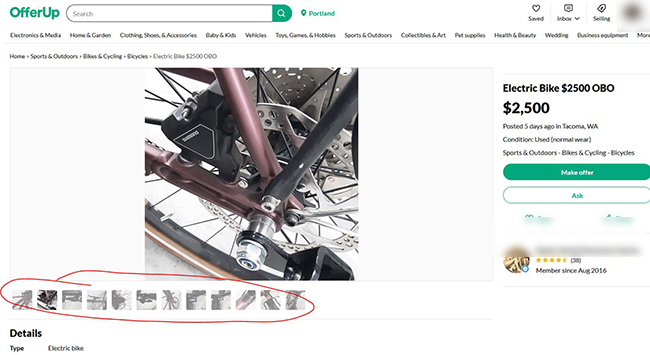 If you want, you can also "save a copy" of the ad to a folder on your desktop, however this is often less useful than just having screenshots - and this typically doesn't work that well with Facebook because of the way their pages are structured. Typically this is done in your browser, just right click anywhere in the ad and choose "Save Page As" and save it somewhere on your computer.

Next, examine the seller's profile and other things for sale

Offerup makes it pretty easy to see more about other items they are selling, but they play 'hide the ball' when it comes to seller information.

If you click on the seller's name you will see other items they currently have listed for sale on Offerup. 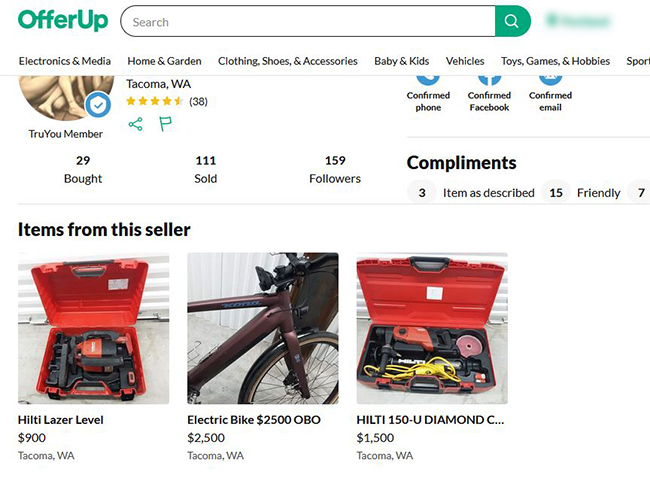 Next, try and see if ads from the same seller contain more stolen bikes or items of interest

If an Offerup bad guy has your bike, he probably has other stolen bikes or stolen goods, too, so we're going to try and search for other ads from the same seller.

Why would you want to do this? Because it makes all the difference between calling police and saying "I found my stolen bike for sale on Offerup " and saying "I found my stolen bike along with six others for sale on Offerup ", which will likely get police more interested. Also, if you can cross reference bikes from the same seller to other Bike Index listings, it's pretty easy to connect all the victims with the same officer or detective, if you can get one involved.

In general, what we're looking for are other bikes, other stolen goods, maybe other photos that will betray more information about the seller. Go look for things like photos of locations, photos showing seller face or details, photos showing car license plates, etc. You'd be surprised what you can find when you look hard enough at a seller's online listings - often they are posting images that will betray more information about who they are, where they are, and the other stolen goods they are selling.

In this example, the seller was nice enough to include the serial of the "Hilti Lazer Level" they are selling, which is something to be on the lookout for. 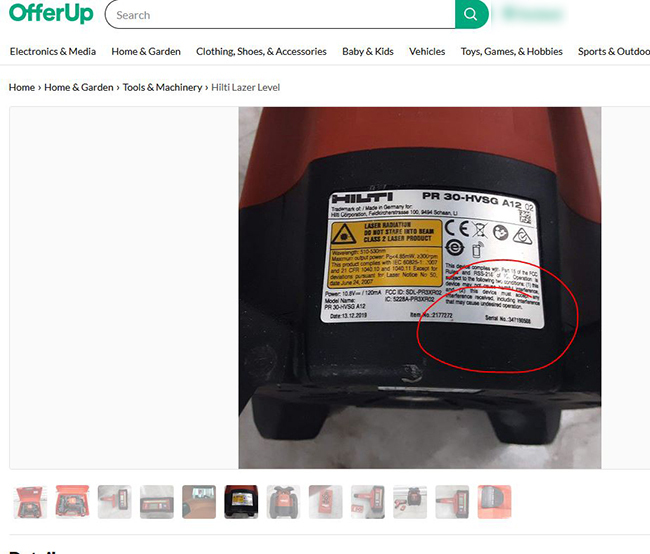 Other things to look for are: items in the background, anything like a car license plate or location information, and/or anything that would let you triangulate their location further from the already anonymized 'map' that Offerup posts with every ad, (shown below) that gives a rough approximation of where the seller is located. 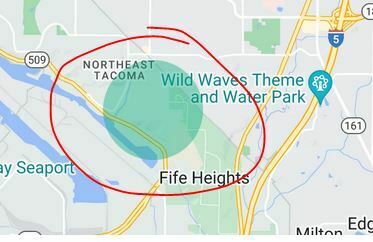 If the poster's ad contains photos with a specifically identifiable building or landmark in that green 'circle' on the map, then you can effectively track down where the photos were taken. This is of use.

In short: It's also not uncommon for bad guys to slip up and post things in photos and other item ads that lead to their identity and location - you never know. Screencap all their other items for sale, if you have time.

While you are doing this, give it a quick scan and look for other bikes. If you find bikes, then:

This may take some time and a little work, but again, it's way more likely for you to get police assistance if you can bring them multiple bikes/multiple crimes instead of just your single stolen bike.

Next, switch to Offerup's moble app so we can pull down friends, followers, and profile image

One of Offerup's quirks is that their mobile app provides more information and details on a seller than their website.

So, at this point you'll have to install the Offerup app on a phone, switch to your phone, and set the Offerup search location to wherever your stolen bike is by clicking the location, which is just below the "Search items for sale" searchbox. 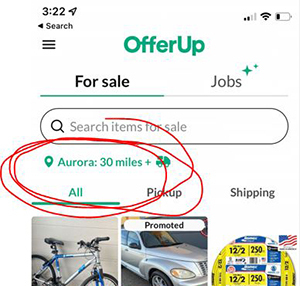 This is a little annoying because Offerup mobile asks for a zipcode - means you have to figure out a zipcode for whatever city your bike was posted in, set the Offerup app to that zipcode, and then search until you find your stolen bike again. (In this example, we're using a Tacoma WA zipcode because the seller is in Tacoma.) 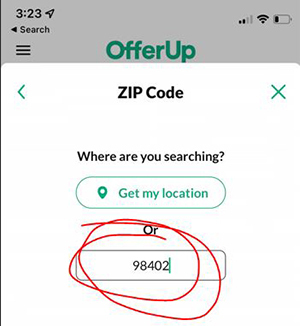 Once you have done that, search for your item again, click it, and click on the seller's name. 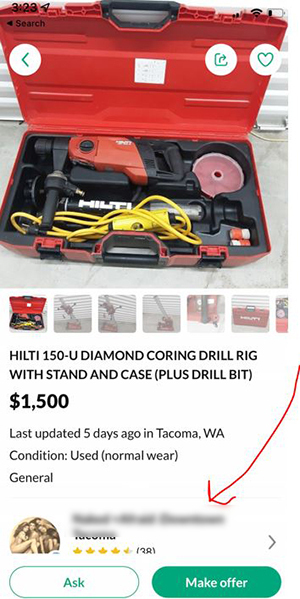 You'll see now that the seller's followers, who they are following etc are now clickable. This is not something you can do on the website - this can only be done in the mobile app. 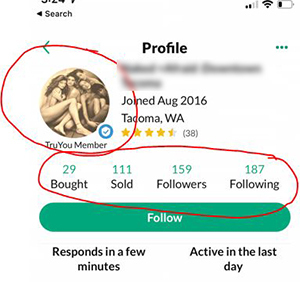 Clicking the 'Followers' or 'Following' here will show you lists of those followers and who the seller is following: 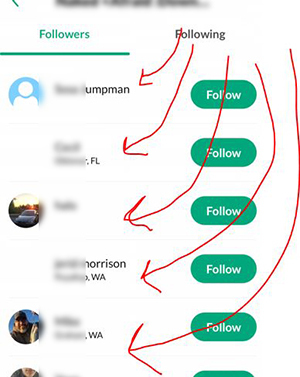 Have a scroll through their followers and who they are following. You can sometimes triangulate around who a person is by their Offerup friends and followers, i.e. if you can locate those same friends and followers on social media and match up details that lead you to the seller. This is something of a dark art, and probably best left to a future blog post. Point being: you can get more information here - so go looking.

Lastly, in the mobile app the seller's 'profile image' is clickable, and provides a higher resolution image than what you can get on the website. 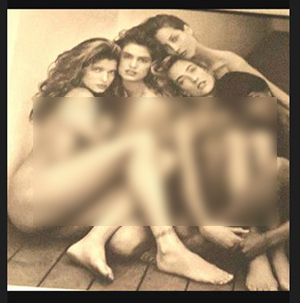 In this case, it's kind of pointless because the seller has used an images of supermodels taken from a GQ photo - and not a photo of themselves or something they took from their Facebook profile. But for sellers who use their own face or profile photo as a profile photo, this often bears fruit.

Lastly, call your local cops - but also see if there are any local anti-theft groups you can liaise with

Now that you have captured this data - screenshots of the ad, any names/data on the seller, and any other ads from the same seller that may also be for stolen bikes (or stolen goods) - call whatever local police you filed with and see if you can get their assistance.

At the time of writing this article (January 2023) not many police departments are offering help with stolen bikes found online. Your mileage may vary, depending on what city you are in. Typically these are factors that will help you get police help:

So: keep the above in mind before you call.

Regardless of whether you get police help, it's also good to see if there are any local anti-theft Facebook groups for your area where you can liaise with people there. In many cities there are already anti-theft folks tracking known thieves and trading information (like screenshots) with each other to identify the bad guys in their cities.

In some cases, if you post "this seller has my stolen bike" to these groups, those groups may already know the sellers name and location and can advise you further. Working with these groups is often key to putting all the pieces together on bad guys who repeatedly sell stolen bikes online.

Thieves and fences often post their stolen goods on multiple platforms to move it as fast as possible. So: If your stolen bike is on Offerup, make sure you also check Facebook Marketplace and Craigslist to see if it is posted there as well. If it is, screencap those ads too - you may just get lucky and the thief may let their name, email, phone, or location slip.

There's one final thing to do

We've long given up on Offerup to do anything about all the stolen bikes on their platform - and we've also watched Offerup continue to route people to their useless "support" black hole in order to detail them or misdirect them from getting anything actually done.

So, if you do find your stolen bike on Offerup - regardless of if you get police assistance or not - we'd like you to file a complaint with the WA Attorney general against Offerup. (WA is where Offerup is based) This is free, fast, and it gets it on the WA Attorney General's radar.

There is an article that explains how to do this here: How to file a WA Attorney General complaint against Offerup

Thanks for reading, and we hope we can help you get your stolen bike back!