As bike shops and cycling organizations scramble to keep up with the massive demand for all things bicycles into 2021, a parallel spike in bike thefts has been causing additional strain over the past 12 months. In response, collaboration among bike theft-sympathetic organizations has become the standard for putting pressure back on bike thieves.

Bicycle Retailer has chronicled how bike shops are banding together and working with local law enforcement to fight this rise in bike thefts, with the aid of tools like Bike Index.

One resource mentioned... is Bike Index, a non-profit bike registry that's recovered over $13 million worth of bikes stolen from shops and individuals. Co-founder Bryan Hance called 2020, "...a mother of a year for smash-and-grabs at shops. Once everything locked down in the spring, no one wanted to use public transportation. Then we saw massive step-back by law enforcement stretched thin by protests in Portland. Shops were broken into three or four nights in a row."

Bicycle Retailer, February 2021. Some bike shops in Chicago and Portland have had smash-and-grabs on multiple instances in a week.

If curbing bike theft is no longer possible alone, cycling businesses and organizations are up to the task of collaborating to compound their dent in bike theft. One of the best examples of this approach is in Boulder, CO, where the Boulder Police Department, local bike shops, and the University of Colorado Boulder have all started using Bike Index to register and recover bikes together.

"The Boulder Police Department has launched several initiatives to address bike theft," says Boulder Police Officer Mitch Trujillo. "Site security surveys are performed at the bike shops in order to target harden the business and make them less vulnerable to theft, including smash-n-grabs."

Mitigating break-ins is just one part of the solution. BPD officers are returning bikes to their owners through Bike Index tools (like the daily stolen bikes hot sheet), bike theft prevention spoke cards, and bait bikes. 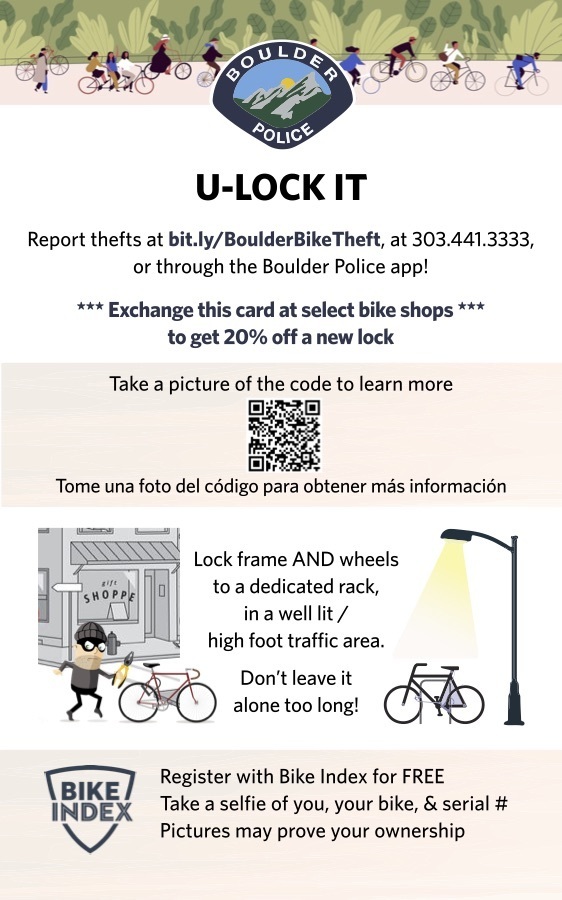 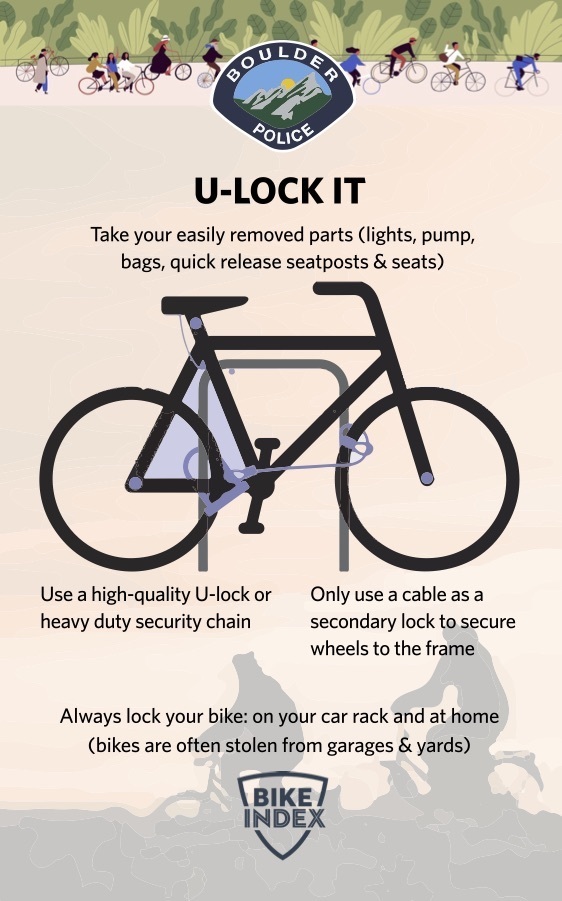 Boulder PD's weather-resistant, eco-friendly bike theft prevention cards - officers on foot and bike patrol place these cards in the spokes of parked bikes. The cards have a QR code that links to information cyclists can use to register their bike with BPD and Bike Index, or trade the card in for a discounted bike lock at participating bike shops. The page is also translated for Spanish speakers.

Boulder Police Officers also engage the local cycling community on social media to "provide prevention tips to the public including where to search online for their missing bike and the steps to follow if they locate it," says Trujillo. 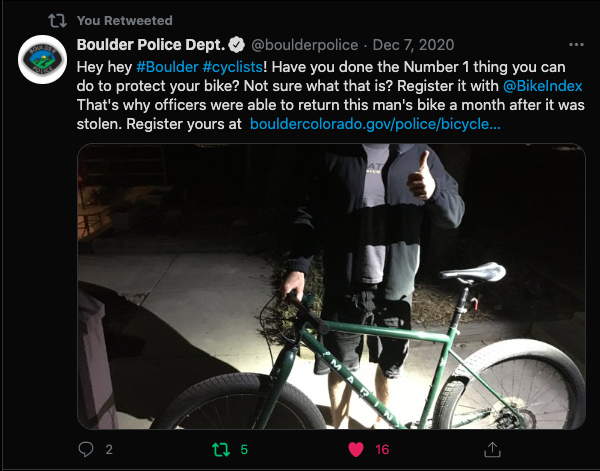 The collaborative approach has already worked well in Edmonton and Calgary, both in Alberta, Canada. Edmonton alone has registered almost 55,000 bikes in Bike Index since 2019 and their bike recovery rate has gone through the roof, thanks to local bike shop registration efforts and community outreach.

With input and a small bit of effort from all of the major players in any given city, the incentives for bike theft begin to decrease. With law enforcement, community nonprofits, bike shops, and the university all registering and searching bikes on Bike Index daily, the risk of stealing or selling a stolen bike rises.

BPD Officers "periodically assist victims in the recovery of their bike when meeting with a ‘seller’," says Trujillo.

Boulder's collaborative investment in Bike Index registration and the reduction in bike theft is rapidly moving the small mountain town into one of Bike Index's most successful partnerships.