A wave of new Bike Index partnerships in Alberta, Canada are proving to be some of Bike Index’s most successful municipal relationships to date when it comes to registration and recovery.

How have they done it?

1) Collaboration between the community and local law enforcement

Things kicked off in Edmonton, AB one year ago. Constables at the Edmonton Police service noticed a local group of Facebook users harnessing the power of social media to report stolen bikes, flag suspect thieves in the area, and actually find and return stolen bikes to their original owners.

The Stolen Bikes Edmonton Facebook group proved to be a model for community collaboration. They worked with EPS to implement Bike Index, and in just 12 months, Edmonton has managed to register over 23,000 bikes - a record for any Bike Index partner city in any country.

Edmonton has also spearheaded the development of a handful of new Bike Index features for law enforcement, including the police dashboard, a daily stolen bikes hot sheet, and additional tools for helping local bike shops register bikes in Bike Index. By fostering a relationship of positive feedback throughout Edmonton cycling organizations, Edmonton has figured out exactly what they need for successful registration and how to use Bike Index to get there.

2) Active communication among cities in the province

Edmonton's success in registration and recovery did not remain a secret.

Calgary launched a Bike Index pilot project in 2019. In May of 2020 alone, Calgary recovered over $12,000 in stolen bicycles. The official partnership launched in June.

These two cities are not the only two new Bike Index partnerships in Alberta. Lethbridge, AB, another 200 km south of Calgary, began their program last month as well, offering free bike registration and stickers to all cyclists in Lethbridge.

"We’re going to find a lot more stolen bikes quicker and hope to alleviate the bike thefts that are happening,” says Cst. Shawn Davis of the Lethbridge Police Service.

3) A strong intersection between the public and private sectors

Each of these cities has taken the steps to involve important players in their cycling communities: local bike shops, universities, and collections of cyclists on the ground, such as the members of the Stolen Bikes Edmonton Facebook group that continue to help people in Alberta recover their stolen bikes.

"The bike community, local bike shops, and local trail associations have been supportive of Calgary's partnership and are helping spread the message to register bikes," says Cst. Seibel.

And with inter-community partnerships beginning to form among the various cities in Alberta that are migrating bike registration to Bike Index, the risk of trying to buy, sell, or ride a stolen bike is only increasing.

One of the most successful examples of this is the increased liability of trying to sell a bike online. With stolen records of bikes on Bike Index and vigilant community members monitoring sites like Craigslist, OfferUp, and LetGo in Canada, the online sale of a bike is becoming less and less likely, decreasing the incentive for stealing a bike in the first place.

We're going to find a lot more stolen bikes quicker and hope to alleviate the bike thefts that are happening.

Bike Index tools for law enforcement allow partner departments to do more work with less effort. Finding bike owners is as easy as a few clicks.

Each partner city in Alberta has produced tamper-proof, water-resistant, QR-coded Bike Index stickers to distribute to local cyclists. They can scan the stickers on bikes while on patrol and immediately get in touch with bike registrants, even if those registrants don't yet know that their bike is missing. 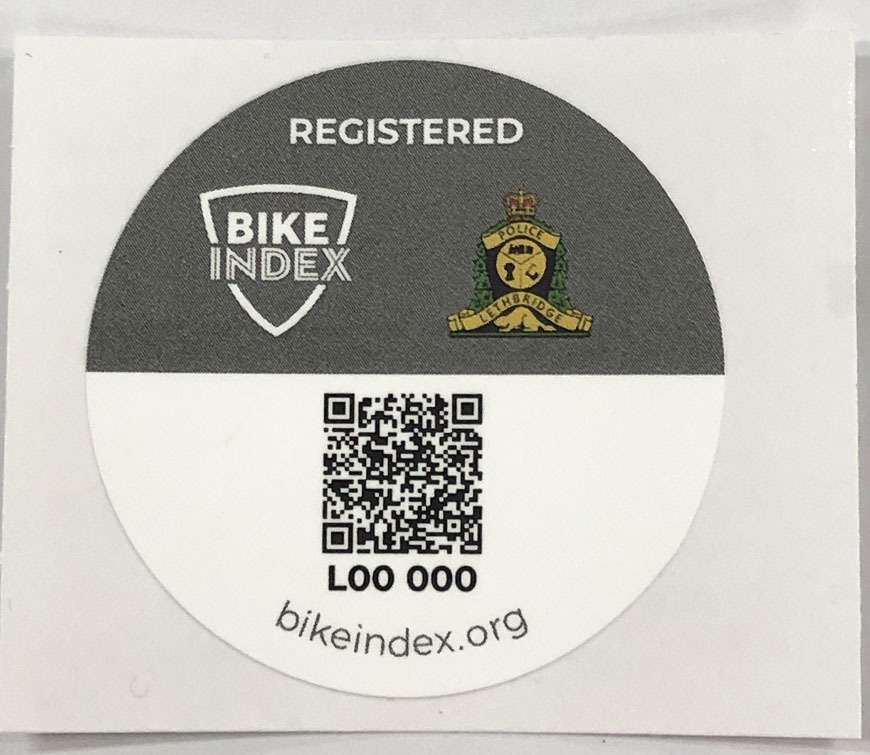 Having tens of thousands of local bikes marked with Bike Index stickers has another purpose: it serves as a warning to thieves. Anywhere within hundreds of kilometers, people will be on the lookout for stolen bikes.

Bike ridership and bike sales are up significantly this summer, which means significantly more bike theft as well. But with new cities in Alberta moving to implement Bike Index systems each day, things are looking good for bike recovery in the province as a whole.

While recovery is one thing, being able to return bikes to their owners is something only afforded by good record-keeping. Luckily, these Canadian cities are on top of it.

"Far too many bikes that are seized or turned into police are taken to auction or donated as police can't find the owners," says Cst. Seibel. "It's now common to search Bike Index when purchasing a used bike which is one more step to ensure it's not someone else's ride."

Cities in Alberta have managed to do all of this without spending on expensive software and training for their law enforcement officers. Bike Index is a 501(c)(3) nonprofit with the aim of building platforms with real solutions for real problems.

Bike Index takes into account the development needs of law enforcement partners and builds specific functionalities that partner cities need to operate, with the aim of scaling to other regional, national, and international partners that are also looking for tools to reduce bike theft and return bikes to their owners.

In each city, just one or two officers have been able to get dozens of local organizations on board registering bikes seamlessly onto Bike Index's universal registration platform. Once a number of organizations are on board, registration increases exponentially and reaches the critical mass necessary for spotting stolen bikes and getting them back to their owners.