Since Bike Index began in 2013, the open-source, nonprofit registry has helped recover over $8 million in stolen bicycles. By allowing theft victims to register their bikes - and then push them to an online community of over 250,000 users - Bike Index pioneered a model for the cycling community to fight back against unchecked bike theft.

Taking advantage of Bike Index’s 750+ partner organizations is still as easy, fast, and free as ever. Bike Index's innovative mix of social media tools and industry partners like LeadsOnline, Ascend, and Lightspeed, offers a platform where organizations and individuals can collaborate against bike theft. Listing a bike on Bike Index remains the most effective registration system for recovering a stolen bike.

And Bike Index remains at the forefront of developing new tools for registering and recovering bicycles. 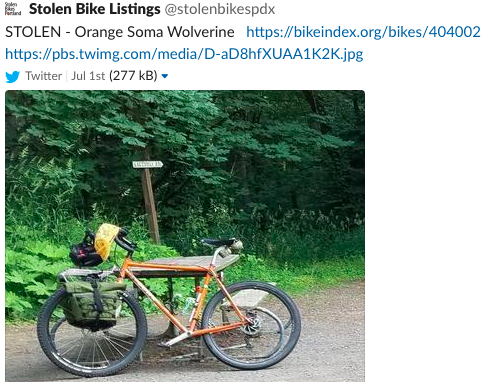 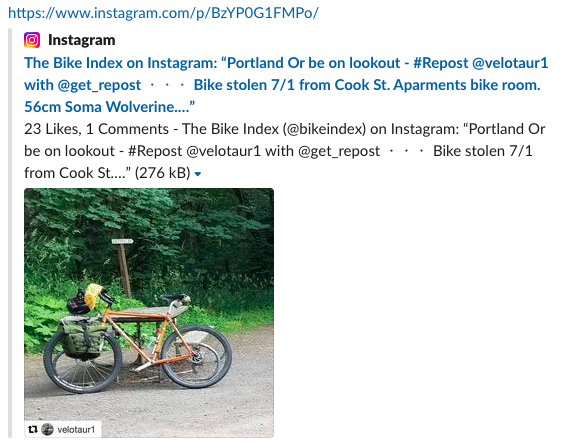 “Finding stolen bikes has always been a numbers game,” says Bike Index co-founder, Bryan Hance. “The more people that can see what a local stolen bike looks like, the more people will look out for that bike - and the chances of that bike being spotted increase. And promoted alerts are a new way to get a lot more eye on a stolen bike, quickly, and cheaply.”

With a promoted alert, bike Index creates and distributes a visual stolen bike alert to people in the victim's area via Facebook. With three alert 'tiers' to choose from, Bike Index can affordably help victims share their stolen bike details farther and wider to a hand-picked audience sympathetic to bike theft.

And these alerts work. Within the first week of shipping the first promoted alerts, Bike Index recovered a bike. 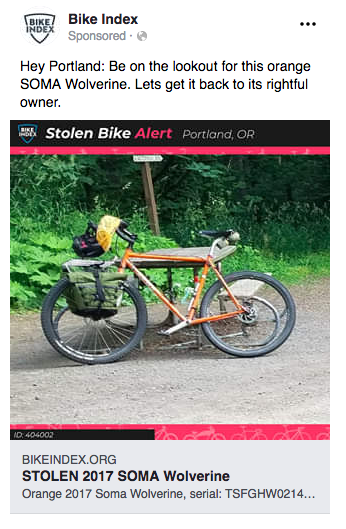 "The Promoted alert service allowed someone to send a text message directly to my cell phone so I saw the online posting of my stolen bike ASAP. It got a lot of people involved to help look for my bike"

Ironically, the thief who stole Gabriel Trainer’s bike tried to fence it online around the exact same time that Gabriel’s promoted alert began serving to thousands of local cyclists on Facebook.

Within 24 hours of posting, Trainer's alert "allowed someone to send a text message directly to my cell phone so I saw the online posting of my stolen bike ASAP," said Trainer. "It got a lot of people involved to help look for my bike." Trainer’s Facebook alert pushed his stolen bike to 7,000 viewers within 15 miles of the bike's theft. 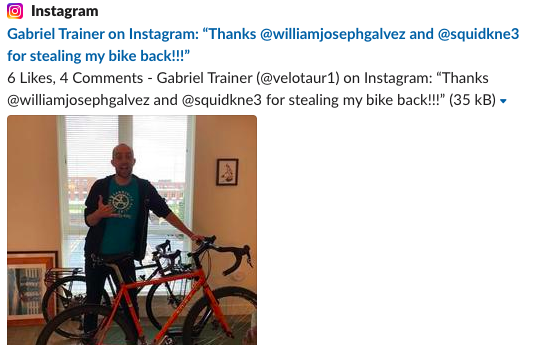 The promoted stolen alerts come in three options, with the ability to choose a plan based on number of views and duration of the ad. The cost of the ad goes directly into creating a Facebook alert and catering impressions based on the location of the stolen bike and bike-friendly audience. Bike Index takes the work of creating the ad with the image of the stolen bike and makes sure it gets out to the most relevant people - groups we've learned to recognize over the course of the past decade of theft recovery experience.

The alerts pair with a new checklist of things to do when a bike is stolen to make sure bike theft victims use all of the resources available to them through Bike Index and partners.

Promoted stolen alerts are a great addition that allow Bike Index users to supercharge their bike to a network outside of their immediate online friend circle. Spreading the word and getting a police report are essential items in theft recovery, and we hope that our new tools will increase Bike Index users' ability to do these things.

“We started Bike Index knowing that the public was looking for a way to connect to and use bike data,” said Seth Herr, Bike Index co-founder and CTO. “All of our expansions have been on this core idea. We let people register and list bikes easily, quickly and for free. And we provide agency for spreading stolen bike information as fast and far as possible. This is why Bike Index is so successful.”

Bike Index will continue to refine our new promoted stolen alerts to make them as seamless and useful of a tool as possible, for instance, by automating these ads to go out as soon as you place the order, even on weekends.

Promoted stolen alerts are just one new tool that sets Bike Index apart when it comes to bike theft recovery and builds on everything else we have been working toward since 2013. The community approach works, as we've seen from connecting partner organizations, leveraging social media tools, and creating our Ambassadors program. Bike Index actually recovers bikes. If the worst happens, we are here and have your back.