Boise PD will use Bike Index to register, protect, and recover bikes. 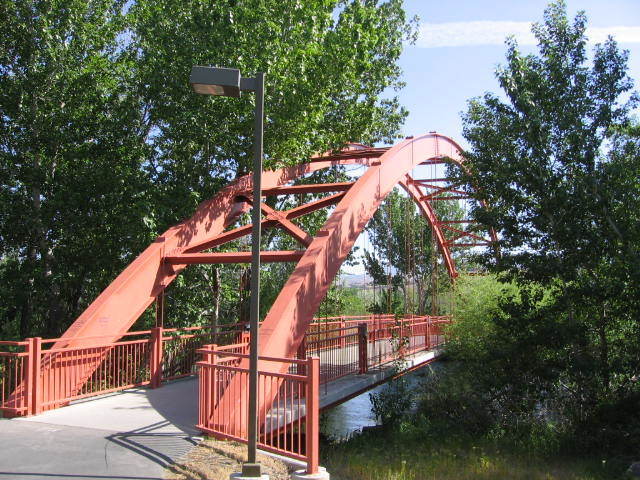 One of several motor vehicle-free bridges across the Boise River connecting both sides of the Boise Greenbelt. By Kenneth Freeman from Boise, Idaho CC BY-SA 2.0, via Wikimedia Commons

Bike Index continues its summer push to enlist new partners in the fight against bike theft by pairing with the City of Boise Police Department. With an upcoming September awareness boost in the works, BPD will broadcast Bike Index as Boise’s official registry, and seek to engage local shops, universities, advocacy groups, and surrounding cities.

The BPD is partnering with Bike Index to recover bikes stolen in Boise as well as those taken outside of the city. Similarly, they want to help local universities find bikes stolen from campuses and moved into surrounding areas, said Haley Williams, Public Information Officer for Boise PD. It helps that Bike Index will move all of Boise’s existing registries into the Bike Index system.

“We hope that other police stations and cities within our area will use this as a one stop place to register their bikes,” said Williams. “We hope shops will register their bikes and put a sticker on the bikes that makes it pretty clear that if a bike is stolen it will be tracked down.”

“We know how successful it is when cities and law enforcement use Bike Index,” said Bryan Hance, Bike Index co-founder. “It really takes a multi-pronged approach between law enforcement, bike shops, and other local partners, and Boise’s taking all the right steps.”

“By plugging Boise into Bike Index’s massive network of users, we’ll be doing what we’ve done in so many other cities so far - letting the city and community tackle this problem from all angles,” said Hance. Bend, OR is one of these cities: with the right community mix for preventing bike theft, Bend decreased bike theft by 60 percent in just one year.

Williams said BPD’s efforts dovetail with Boise’s increasingly ‘bike friendly’ image and recent accolades, as Boise is making its way onto the radar as one of America’s notably bike friendly cities. Thrillist included Boise in a list just last month of best cities in the U.S. for cyclists. And in 2016, Boise moved to 27th place on Bicycling Magazine’s list of 50 Best Bike Cities in the U.S.

“There has been an increase in bike awareness and commuting, and that is a big thing for our city going forward,” said Williams. “We do have a very strong bike culture, people do commute on their bikes and people use the Boise Greenbelt, which is huge.”

The BPD decided that their existing registration was not getting the job done - mainly because it lacked more advanced listings, and the far-reaching network that Bike Index can leverage when a bike is stolen.

“We were looking for a better option than what we currently have. We have a registration but it’s just limited to the city of Boise,” said Williams. With Bike Index, “If you get a new bike you can add it, you can upload a new picture, new serial number. The user takes care of it rather than them having them rely on us.”

The BPD hopes to enlist more local organizations, as Bike Index is open source, meaning anyone can use it to register and search for stolen bikes. For instance, if someone brings a suspect bike into a local shop, that shop can search Bike Index for a match, and quickly contact the owner and the BPD. Bike Index also has a partnership with national pawn search provider LeadsOnline, whose nationwide system alerts pawn shops if a stolen bike is registered at their shop.

The Boise PD’s next steps include promoting Bike Index at community events, such as Boise State University football games. Their largest effort will be September 14 at the BSU vs. New Mexico football game. The BPD is going to incorporate media interviews, pregame coverage, and provide information on bike theft. An officer will register bikes for anyone interested. This is something the BPD normally does, but this year’s efforts will focus on getting bikes listed in Bike Index’s system

“The idea of registration shouldn’t be new to Boise, but now even if your bike might go out of state, the bike may also still be found. Hopefully the idea will be more appealing to people. They may have been thinking I should do that, I should do that, and now they will,” said Williams.

The Bike Index Boise site is now live at www.cityofboise.org/bikeindex.