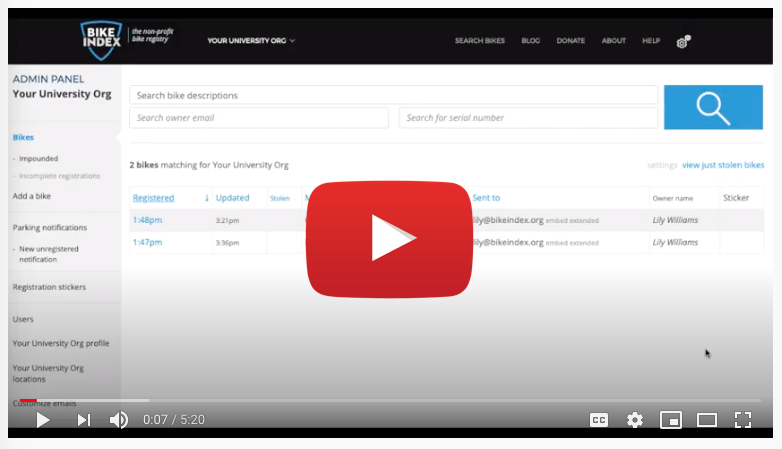 Bike Index has always offered platforms for universities to collaborate among the various stakeholders in bike registration on campuses and in surrounding areas. But Bike Index has six new features to streamline registration, management, and recovery better than ever before.

"It comes down to efficiency," says Thomas Worth of Bike Index's flagship university, the University of Maryland. "The Bike Index features allow a university bike program to operate more efficiently and in a more timely manner. That's important when it comes to students' bikes at a large university."

Bike Index has worked in conjunction with universities to build these features. Thanks to all the great feedback from universities, Bike Index is happy to roll out these great new utilities:

Bikes on campus tend to end up everywhere: locked to trees and handrails, abandoned in bushes and lawns, and left over the summer with chains rusting and tires slowly losing air.

Now, campus officials can use Bike Index tools to create parking 'tags' for bikes to digitally communicate with users through Bike Index.

With Bike Index's new parking notifications system, campus admins can pull up a bike’s registration and instantly message the owner to let them know their bike is parked incorrectly, appears abandoned, or has been impounded.

"These new features from Bike Index will be a great time-saver for our team," says Worth. "When we see a bike improperly parked, we'll be able to locate its record in the database, and send the owner a notification right on the spot. Quicker notifications allow quicker corrective action to be taken. It's a win-win."

Officials can use Bike Index to send follow-up messages and have a digital record of attempts to communicate with the bike owner.

University officials can also create parking notifications for bikes that have not been registered and create notifications in bulk for many bikes at once - such as at the end of the school year when collecting abandoned bikes en masse.

After a number of recorded attempts to get in touch with bike owners, campus officials can also now mark bikes as “impounded.”

Staff can record multiple impound locations and move the bike's digital footprint from location to location to reflect reality. They can also change the status of the bike from 'impounded' to 'returned,' transfer ownership of the bike if they donate it, or remove it from Bike Index if they otherwise dispose of the bike.

Bike Index lets campuses record this full communication history with the bike’s owner, documenting their attempts to return a bike before following through with disposal procedures that the university dictates.

"Up until now, the only way a student would know their bike was impounded was by seeing that it had disappeared. That caused confusion because it could have been two things, either stolen or impounded." says Worth. "A student would have to consult a database to see if it was impounded. Now, they get an email notification, with instructions on how to recover their bike. Thanks to Bike Index, it's the kinder, gentler way!"

The Bike Index features allow a university bike program to operate more efficiently and in a more timely manner. That's important when it comes to a students' bikes at a large university

Universities can now draft custom emails to send to their bike registrants.

Universities can use pre-coded Bike Index templates to co-brand communications with students and campus members. We take most of the work out by providing information on what the communications are for. Universities can then add specific flair such as logos and customize messages to make them maximally relevant. We suggest cat memes.

Universities can dictate email send intervals for messaging about bike graduation - say, every two years. Once they set this interval and customize their messaging, an email will go out to registrants asking them to renew their registration. Those who don't renew will auto-migrate out of the university account but remain in the Bike Index registry at-large.

The bikes will still list under a 'graduated bikes' list - for those students who inevitably fail to renew. But since the majority of campus bikes will only affiliate with the organization for a maximum of four years, there's no need for them to bog down announcements or other important aspects of the registration system.

Campuses put the power of registration in their community's hands and decrease the amount of cataloging and management necessary to maintain accurate numbers.

Our aim is to maintain good order with the many bikes on our campus, and Bike Index is right there with us.

All of these processes further expedite with Bike Index QR stickers. Stickers not only visibly demonstrate registration, but also allow campus officials to scan a bike and immediately get in touch with the registrant.

Administrators can scan a sticker on a bike using just their phone's camera. The scan will pull up the link to the bike and trusted users can use that link to create parking or impound notifications for the bike, including specific messaging about what the user needs to do in order to move or retrieve their bike.

Instead of slogging through the two-step process of recording this information in the field and then filing it in the office, university officials can do everything in one step right then and there.

Stickers are tamper-proof and water-resistant. They will break up into small pieces if a thief attempts to remove the sticker, hindering their ability to fence a bike without suspicion. Water-resistant stickers are also a necessity when most campus bikes spend their days locked outside of dorms and class buildings.

There's a good chance that when bikes are stolen from campus, they won't remain on campus. Bike Index's universal platform has always - and still does - provide a resource for campus and community to work together to return bikes to their campus owners.

Bike Index integrates campus bikes into the local community and broadens university officials' ability to recover a bike that has been stolen and taken off campus.

This increased possibility of recovery has the added benefit of incentivizing campus members to register their bikes. This provides real value to registration for those traversing campus by bike and, by default, increases registration numbers - and bike management capabilities.

"Our aim is to maintain good order with the many bikes on our campus, and Bike Index is right there with us, coming up with ways that make managing our program more efficient and actually more beneficial to the students," says Worth.

The features come with the purchase of a Supporting School package or higher.