Let's talk about "secure" bike parking for a minute.

I personally review every stolen bike report that comes into Bike Index. I do this so I can fix any issues with listings before they go 'live', assist with any particularly egregious thefts, or point victims towards other resources that may help recover their bikes. But it's also a way to keep an eye on theft trends.

Watching the last couple week's worth of stolen bikes come in has shown me that a lot of the stolen bikes we're seeing lately are stolen from "secure" bike parking in apartments, condos, and businesses. 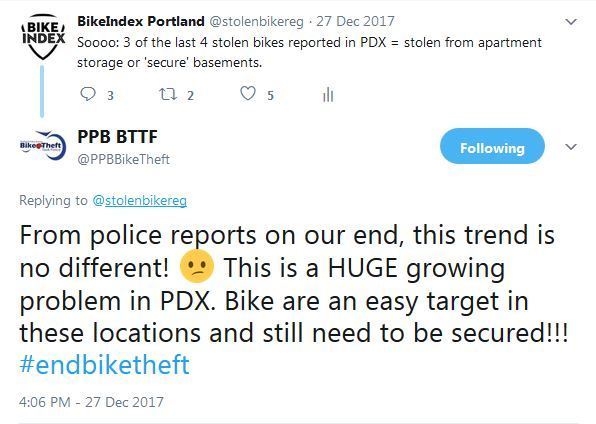 And just to be clear - I'm not talking about the usual home / residential garage & basement thefts here - sadly those continue unabated as always. I'm talking specifically about bike parking areas that have been designed and designated by property or building management as 'safe', usually subterranean cages or locked rooms or other shared 'secure' bike parking.

For example: of the last 50 bikes we've registered in Seattle WA, 16 were stolen from shared 'secure' parking areas in apartment/condos, businesses - or similar 'shared safe' interior spaces. Here are just a few samples. (And, while I'm here, here's one guy's epic recovery story re: chasing down his stolen Felt that was jacked from his 'secure' parking in DC)

And remember - we don't usually get the full story on most of the stolen bikes registered here - some people leave their details out. So I would estimate the 'real' number of bikes taken from these spaces is indeed higher.

So: what's behind this? My thoughts: 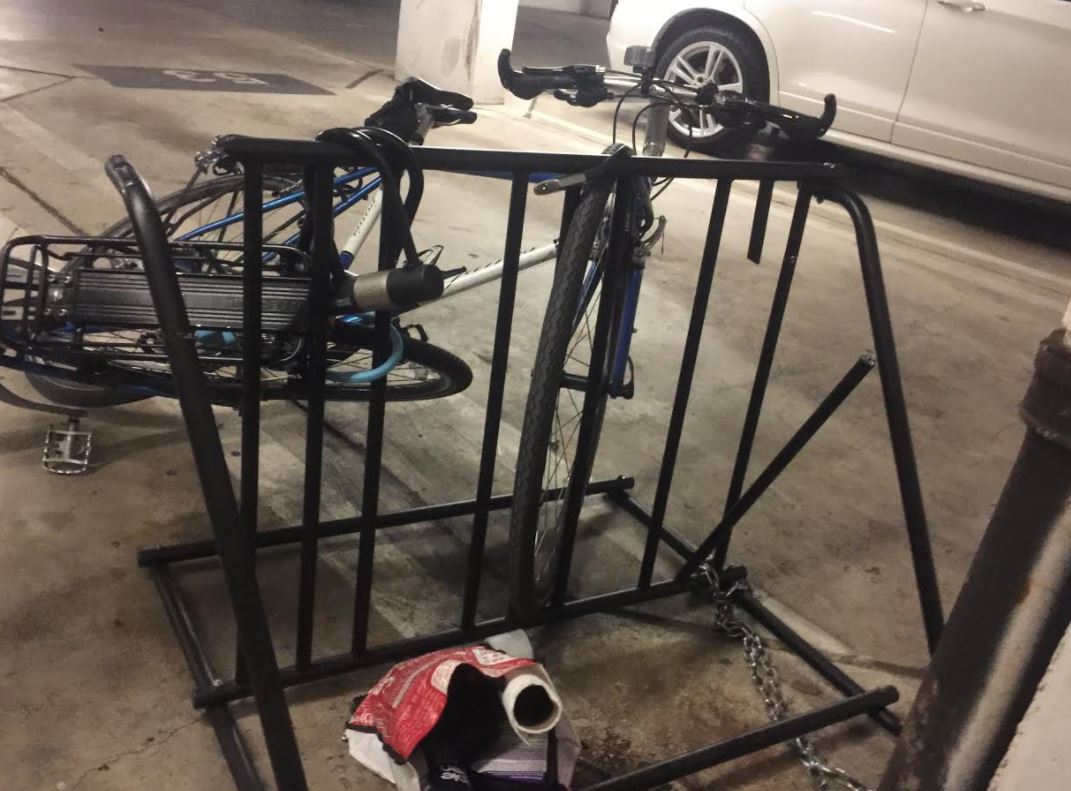 1) With the colder weather, more bikes are stored inside. Most apartments and condos already force people to park in "secure" areas, and they also ban bike storage inside apartments - usually by citing fire codes. So that's just where the most bikes are right now - they're inside.

2) These apartments and condos tout their bike parking as "safer" and "more secure" because they're located inside access controlled areas, with entry via keycode or key fob, and occasionally covered by security cameras.

3) Because of this, many riders let their guard down and resort to weaker locks - or no locks at all.

4) The racks and other infrastructure in these locations also tend to be sub-par - usually cheap aluminum racks and/or drywall mounted hooks/anchors. And a lot of these spaces are protected by chain link, which is trivial to cut. Thus, these protections are quickly defeated by thieves that can make it inside the 'bike room'.

5) Apartment/condo thieves are more devious than the run-of-the-mill opportunists we usually see. Getting inside these bike parking spaces means either tailgating cars inside, maybe entering via some social engineering using 'urban camoflauge', stealing key cards or garage door openers, and carrying better tools to break into these spaces and remove locks and racks. So, these 'winterized' bike thieves tend to be a little hardier.

Whatever the reason, a lot bikes being stolen from these spaces lately. And these thefts usually involve multiple bikes stolen at once.

I emailed Portland's @ppbbiketheft officer David Sanders about these kinds of thefts, who said "I recently talked to a condo manager that had a bad guy come in with a corded grinder and plug into an outlet in a bike storage room and started grinding bike locks. It's crazy … I think we should visit every condo building and have this conversation with them because they ARE going to be hit at some point. EVERY bike storage area is at risk!! There is no way to truly make this secure from bad guys gaining access to them. (Cyclists) need to treat this almost even like a MORE vulnerable area because once the thieves gain access to these rooms at 3 a.m., they have basically unrestricted access to whatever they can seize."

I reached out to some victims of these crimes for their stories of thefts from apartment/workplace 'secure' storage areas: 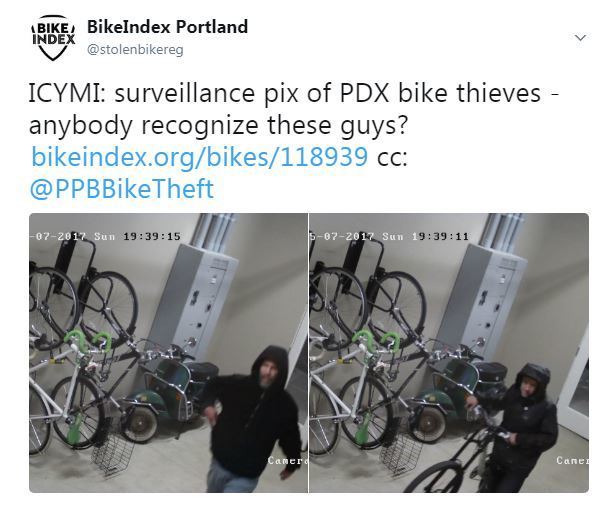 "It seems like people are naive about the skills thieves have," says AF, who contacted me via Facebook. "I know so many people who bought a brand new bike, only to have it stolen in under a week."

SM, who lives in Seattle, says: "We had 3 bikes stolen from the same Capitol Hill building using three different methods, but occurring during same time frame (month & early morning) each of the past three years."

"Initially the bike storage area consisted of a chain link fence with an unsecured latch fence door with a mix of metal bar racks and hanging cable system to secure the bikes. The first theft entailed a a custom mt. bike build with an Intense frame that was secured with a cable to a metal post. Cable was cut to take the bike while other non-secured bikes not taken."

"Months after the second theft, property management put a code entry plate on the fenced door to provide secured access to the bike storage area. The area was accessed by simply cutting the chain link fence and reaching around to open the door without the code. The bike was secured to a metal bar rack with a Kryptonite ULock - medium size - grade 8 I believe. This time it was a new Orbea road bike stolen by cutting the metal bar rack." 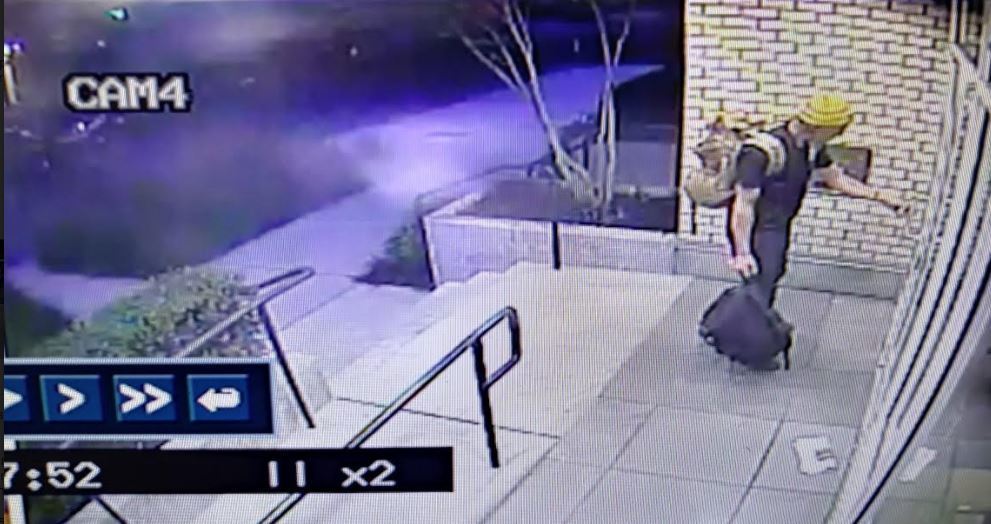 "Months after this theft, property management installed a sheet rock wall in place of the chain fence and a regular door with a coded button system to access. The bike was secured with a Kryptonite Ulock - medium size grade 8-9 to the metal bar. This time a Liv cyclocross bike was stolen by using a blow torch to loosen the brackets on the metal bar rack. I went around the neighborhood after this incident and saw three sets of people with backpacks containing blow torch chambers and two of the sets of people standing around with nice bikes at 6am didn't look like they intended to ride them."

"One of the guys in those sets of people showed up on surveillance video from the apartment building - entering the building around 5:30am. Property management was not sure how they entered: if they had a device to disable to secure building access system or if they had a fob. Some trends we noticed: the 3 thefts all occurred in August & September each year and appeared to happen in the early morning hours (4:45-6am) Most of the time multiple bikes were stolen from the storage and multiple groups of people were observed around the neighborhood at the same time - as though it was a targeted group effort."

SK, who had two bikes stolen, sent in a long and painful story. "Both were locked to anchored loops on the brick wall with thick cable locks – overkill, I thought, for a locked garage. I was intending to stop someone from just casually grabbing a bike and running, not preparing for professional thieves … My neighbor called to say that our garage had been vandalized. The thieves smashed or cut the lock box off to get the key, and they took the box with them (to avoid fingerprinting). They hauled out eight bikes (including my two) – some locked, some not, cutting cable locks to take bikes and grabbing whatever unlocked bikes they could carry. To leave the garage silently and without disturbing any alarms, they pulled the release on my garage door opener and opened the door manually."

"They didn't touch or damage anything else in the garage," says SK. "Just bikes. They took every smooth fingerprintable thing they touched with them. They also avoided driving in front of our building's security cameras."

CB relayed this story: "We have a private locked bike room in our secure garage way at the back of the parking area - it’s not visible nor is it easily discoverable - you have to know it’s there. You need a fob for the garage doors, plus a different key for the bike room. I discovered one day that someone had tried to take some bikes out of the bike room - lights were stripped, and wheels were loose, as if it was someone who didn’t know what they were doing. Stupidly, we kept one of our bikes there anyway, and within a week there was a major theft. U-locks that were cut through and quite a few bikes missing, including my husband’s beloved Specialized. It was only then that the condo management changed the lock on the bike room door, even though they knew about the earlier problem. No communication, no notification at any time - no warning to the rest of the residents to move their bikes out of the compromised room. Luckily, my commuter was up in the apartment for some reason, so that was safe. Since then, our commuter bikes have been locked visibly in the garage so that they’re in full view of anyone trying to mess with them. Our expensive bikes stay up in the condo." 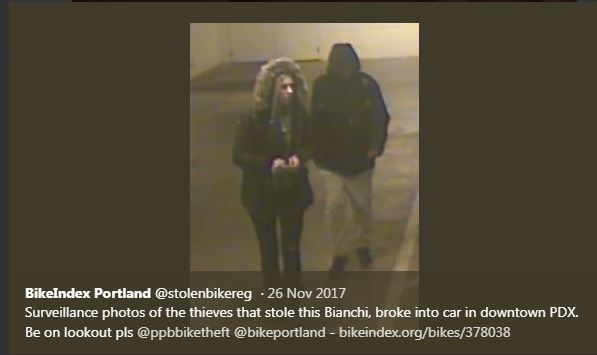 As most victims quickly find out, those widely-touted security cameras are there to protect the building and the owners - and not the tenants. Even if there is surveillance footage (which tends to be typically poor quality to begin with) most management companies refuse to provide that video to theft victims. I can't tell you how many times we get stolen bike reports saying "There are security cameras, I'll be back shortly" - only to have the victim report later that "building security refuses to give me the footage." Most businesses cite "company policy" or simply "we're only allowed to give this to the police". Something to think about, if you're parking in a space covered by security cameras. 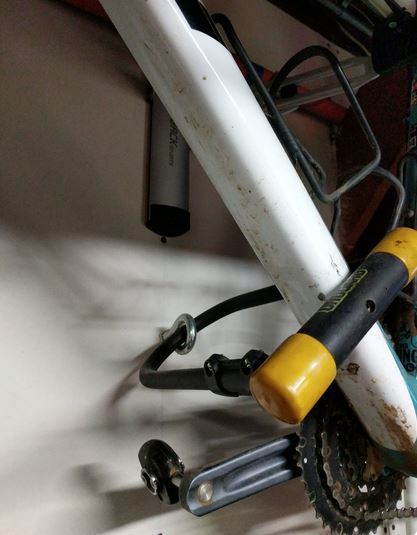 Problem 2: A reluctance to let tenants and/or bike cage users know about thefts

Also maddening is the complete lack of notifications most property owners give to their tenants and guests about bike cage break-ins and bike thefts.

For example, we'll see the same apartment building get hit multiple times, and the only way residents know about it is because they're all reading Bike Index and contacting each other with "Hello, my bike was just stolen here too, do you have any information on these thefts or have you heard any more about what happened?" And that, honestly, is super frustrating.

Ok, so - what do we do about these thefts?

Here's a couple of tips we put together for cyclists who store their bikes in apartment, condo, or business parking

If you have other tips you'd like to send us here with regards to keeping your ride safe inside of a "secure" parking job - or want to share your bike theft story, I'm <a href="mailto"bryan@bikeindex.org">bryan@bikeindex.org</a>.

Want to see your city listed here? Drop us a line and help us get your city or local police department set up with Bike Index, too.

As always thanks for reading and ride safe, folks.