Just over nine months ago, someone broke into Kyle Gunsul's house and stole his bike.

They did a good job, too - Portland locals may remember Kyle's post to the local racing listserv detailing his burglary:

"… (the burglar) removed the porch light, broke a locked gate, came through a window, busted down two security cameras and busted through another gate. They ONLY took the bike. They were feet away from my living room with computer and stereos but they knew what they were coming for. Was definitely cased." 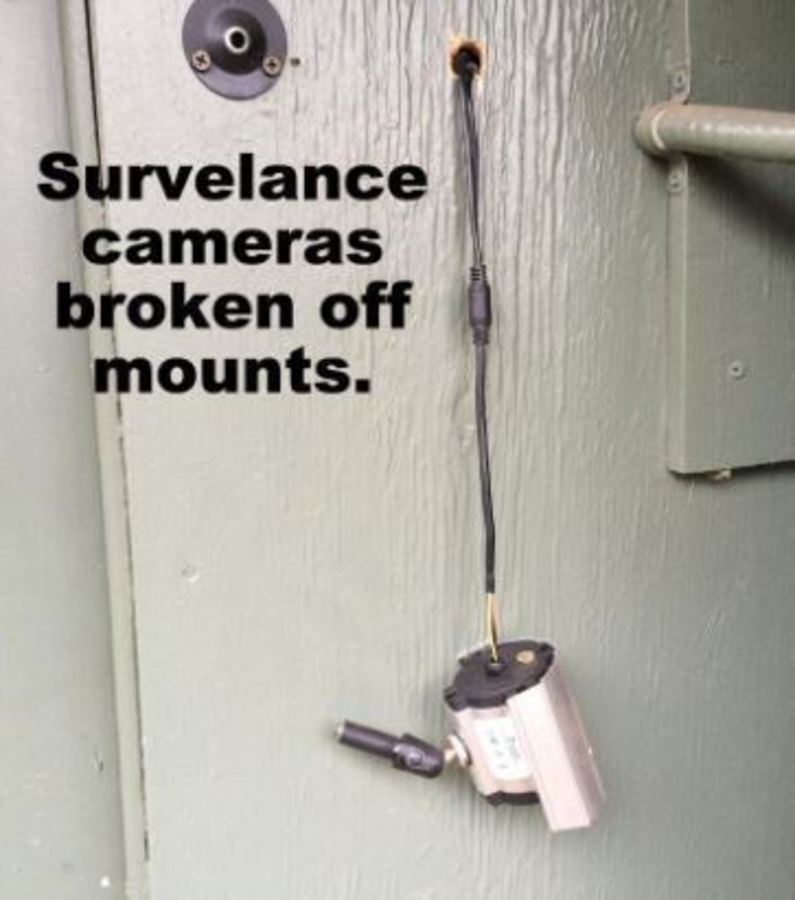 Adding insult to injury, "I had just gotten it back after having a couple hundred dollars of work done to it," Kyle said, "… and I kept thinking of what bad timing that was."

In addition to registering with Bike Index, Kyle got the word out - photos of his stolen Kuota Kharma made the rounds on Nextdoor, Twitter, Facebook, and the usual local bike email lists. After that, though, Kyle's bike did what most stolen bikes do - it disappeared.

There are some unsung heros most people don't know about: people who spot stolen bikes for sale online using Bike Index's stolen bike listings. These people spot stolen bikes, alert the owners through Bike Index, and then we work with the victims on the chase and recovery.

These 'spotters' are a varied group: Some buy and sell for themselves and simply don't want to buy stolen bikes. Some are bike theft victims just keeping an eye out for the community. Others just know how to spot a sketchy sale - my inbox overflows with emails that begin "There's no way this is legit - can you guys look into this?"

These people constantly pull needles out of haystacks - many of which we've chronicled in our blog. Their ability to cross reference thousands of stolen bikes against the thousands of listings they see online is a testament to the power of 'the human search engine'.

Some are extremely adept at this - the spotter who found Kyle's Kuota has ID'd and helped returned over a dozen bikes through Bike Index. He's the same spotter who just ID'd two stolen Terns that Portland Police helped return last Wednesday. He's got the knack for it.

As someone who's been chasing bike thieves for ten years, I'm always interested in what motivates people to do work like this.

"I've had several bikes stolen from me, two of them from Portland from my backyard so I'm motivated by the mix of emotions I felt when those were stolen from me," he says. "The righting of a wrong, trying to fix the injustice of having someone stealing things that doesn't belong to them. The feeling of loss when you lose something that you depend on more than you realize. The audacity of people to steal things and then try to make money off them in an online community forum. Seeing too many bikes on the road that are more likely stolen that not."

"I don't consider myself a crime fighter at heart, just someone who's trying to right a few wrongs that shouldn't be happening in an ideal world. Really ugly stories of thieves stealing from kids or old people get me extremely motivated to help out."

On July 13th, this spotter flagged a bike sale on Offerup.com. In looking through the sellers items - power tools, watches, clothes - the black carbon fiber bike for sale stood out. It was Kyle's Kuota, natch - propped against the wall of a storage unit. 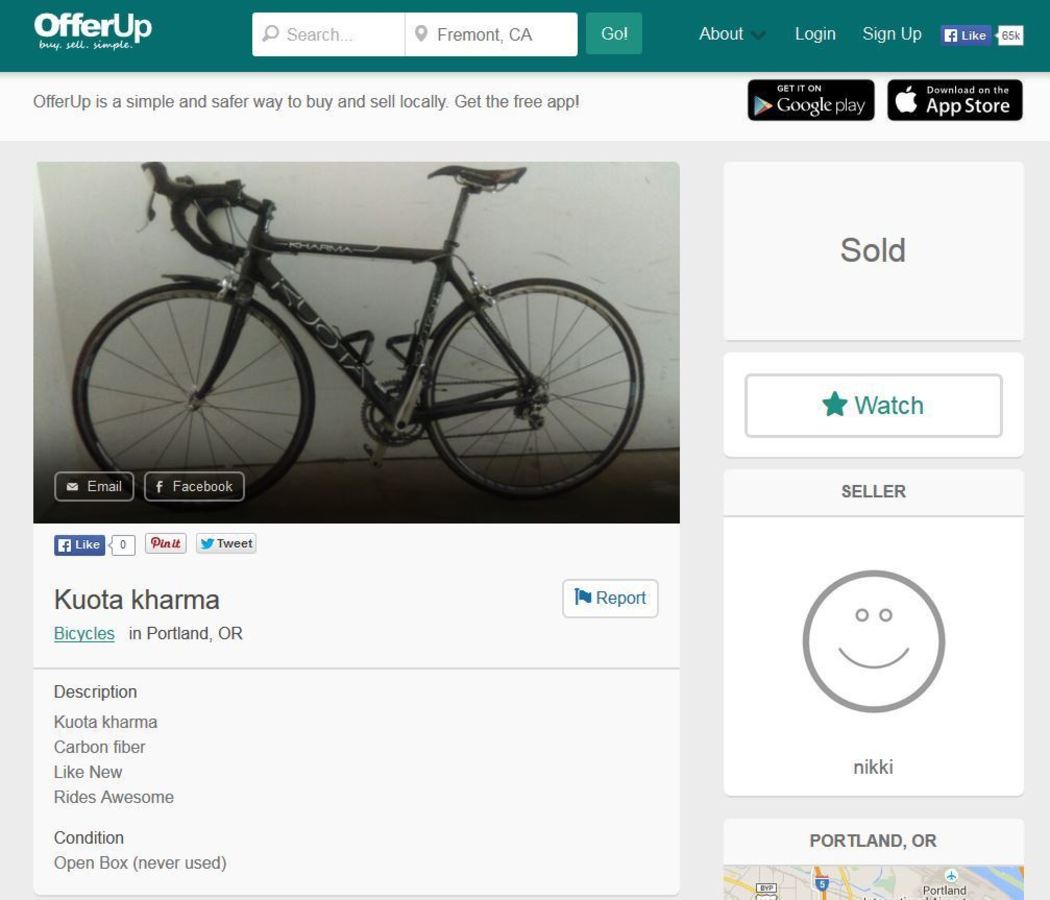 Chasing stolen bikes online is hard. The sellers stay anonymous, there's a huge number of outlets for them to sell, and there's little support for victims … I could go on. Every day I deal with people who find their stolen goods for sale online, and it's tiring. The burden is completely and totally on the victim in situations like this, so I'll jst summarize by saying this: chasing your own stolen bike online sucks.

We sent Kyle the standard "I just found my stolen bike for sale online" instructions: Call the police, now. Get a fake email and burner phone number. Start monitoring the seller. They're on our watchlist now, so we'll see if they add more bikes, but call whatever police department you filed your burglary with. Specifically mention the bike was taken in a home burglary.

At this point, most victims are stuck unless they can get police to help. Kyle had the right combination, though: a burglary, a unique and well documented bike, up for resale in the same city as the theft. All these details meant Kyle had a better chance of getting police to look into the listing.

Kyle called Portland Police, who sent an officer out. Soon after that, Kyle heard from burglary detectives, who took it up from there. 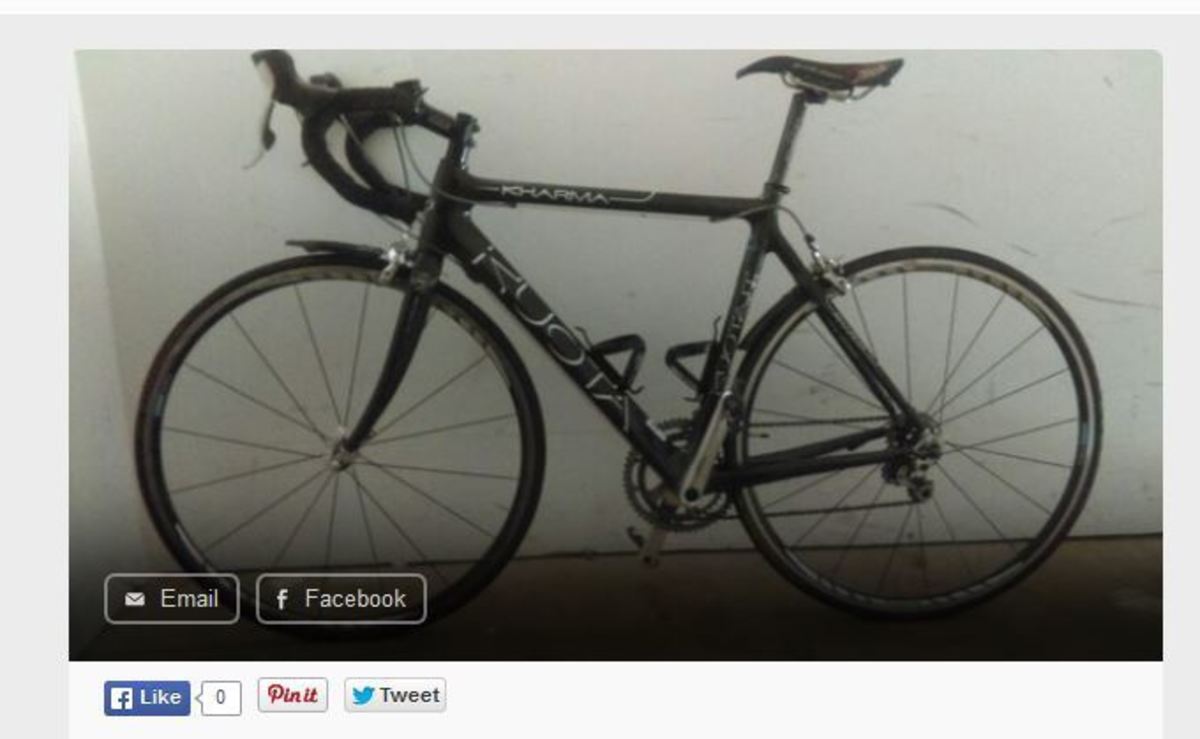 And then … months passed. Justice, as they say, grinds slow. Every few weeks, Kyle and I would touch base - We were both watching the seller's items come and go, both hoping the bike's ad stayed online.

"I had the ad as one of the tabs in my browser," Kyle said, "I'd refresh it every day to see if it disappeared. As the weeks went by, everyone I told about it said I should just set up a buy and take it back before it gets sold. But I held out confidence that the police were working on it."

And they were. Without getting into the details (the criminal case is just now wending its way to court now) the seller was evasive. At one point, the ad for Kyle's bike disappeared completely.

Weeks later, though, the very same spotter who found Kyle's bike the first time flagged a totally different seller with Kyle's Kuota for sale. They were even using the same photograph.

One week ago, Kyle emailed with a flurry of new activity from police. And on Monday, a voicemail: "…I've got some good news for you." Police had recovered his bike after serving a warrant.

Kyle texted me a photo (shown here) when he picked it up from the police warehouse - and it came back more or less as it was stolen: "It's in great shape", Kyle says of his recovered Kuota, "I don't even think they rode it." 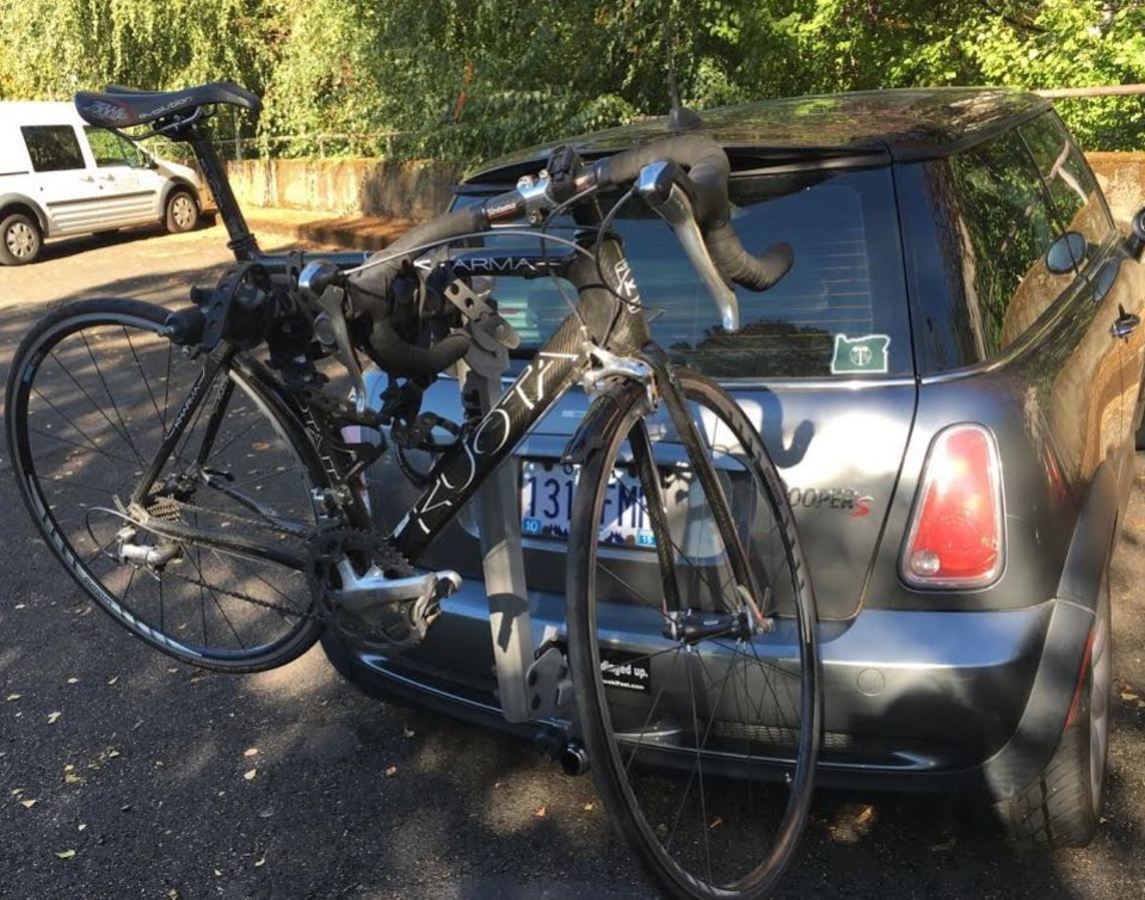 As I emailed Kyle over the next few days, details trickled out from Kyle and one of the detectives about what they found - mainly, many, many stolen items, several of which they had specifically linked to other related crimes the police correlated while looking into Kyle's burglary.

Five more bikes were found, three of which (at time of publication) had been reported as stolen. The detective I spoke to told me they have linked him to eight other burglaries so far - and they aren't even done cataloging everything they seized yet.

Unsurprisingly, the man police arrested has a lot of previous arrests: Burglary 1. Burglary 2. Methamphetamine possession. Felon in possession of a weapon. Possession of burglary tools. Parole violations. Theft by receiving. You get the idea.

So, sadly, Kyle's not done with this experience yet - there's a jury appearance in his future. But knowing that a simple stolen bike chase snowballed into something much larger - something that is likely going to remove a serial burglar from polite society for a couple of years - it seems worth it.

As for me, though … there's a dozen similar stolen bikes sitting in my inbox right now. A theft. An online seller with sketchy listings who has the bike. Someone who's dying to get their bike back, but isn't getting any help with it. And so on. So we're still at it. But we'll happily scratch Kyle's off the list.

There's been a lot of talk in Portland about how we can help fight bike theft. Kyle's story, to me, is a blueprint for how this works: the community can handle registration and vigilance, Bike Index provides tools and tech, and police provide the enforcement. But it's all fledgling. We need ten times more effort.

I asked Kyle what he thinks the bike community can to do help the problem:

"As a community we need to assist 'investigators' (cops, Bike Index, and other bikers) as much as possible. Register your bike. Take out your phone and shoot photos of your bike," he said. "Take a photo of the serial number. Take a photo of scratches or any unique details. Get some new accessories? Take more photos … they can be incredibly helpful in getting your bike back."

I asked Kyle about the long drawn out process of watching the police chase his bike.

"I think the police are doing the best with what they have. Again 'the people' decide how much power the police will have in our democracy and how well funded we want them to be. I think we get what we pay for. The officer that responded to the report you sent me about it being for sale online came by during two shootings in the same day. His radio did not stop with updates - and here I was worried about my bike."

Lastly, I asked Kyle about the thieves actions - i.e., listing such a unique bike for sale only months after it was stolen.

"If you remember when I first posted about it being stolen I didn't want to post it on Bike Index because I was positive any self-respecting person that went through the trouble of breaking into a house to steal it would surely monitor Bike Index to see if it's safe to be sold online," he said. "I watched the sites myself for a while trying it find it before finally posting it (on Bike Index). That was foolish. These guys are no criminal masterminds."

Couldn't have said it better myself.

We'll continue to watch the criminal case as it plays out over the next several months, to learn more about the fate of the arrested individual.

For now, though, I'm just hoping I'll run into Kyle on his Kuota on the road - perhaps we can take a victory lap together.