October was - as the kids say - amazeballs.

As always - before we begin - I have a quick favor to ask:

1) Please tell your local bike shops about the Bike Index! We always have great recoveries thanks to our bike shop partners - and we could always use more.

2) Haven't registered your bikes yet? Seriously … what are you waiting for? Please register ASAP - and please tell your friends.

3) Are your local police using Bike Index yet? If not, why not? We're free, super-effective, and have resources available just for law enforcement. Have them get in touch, we'd love to talk. 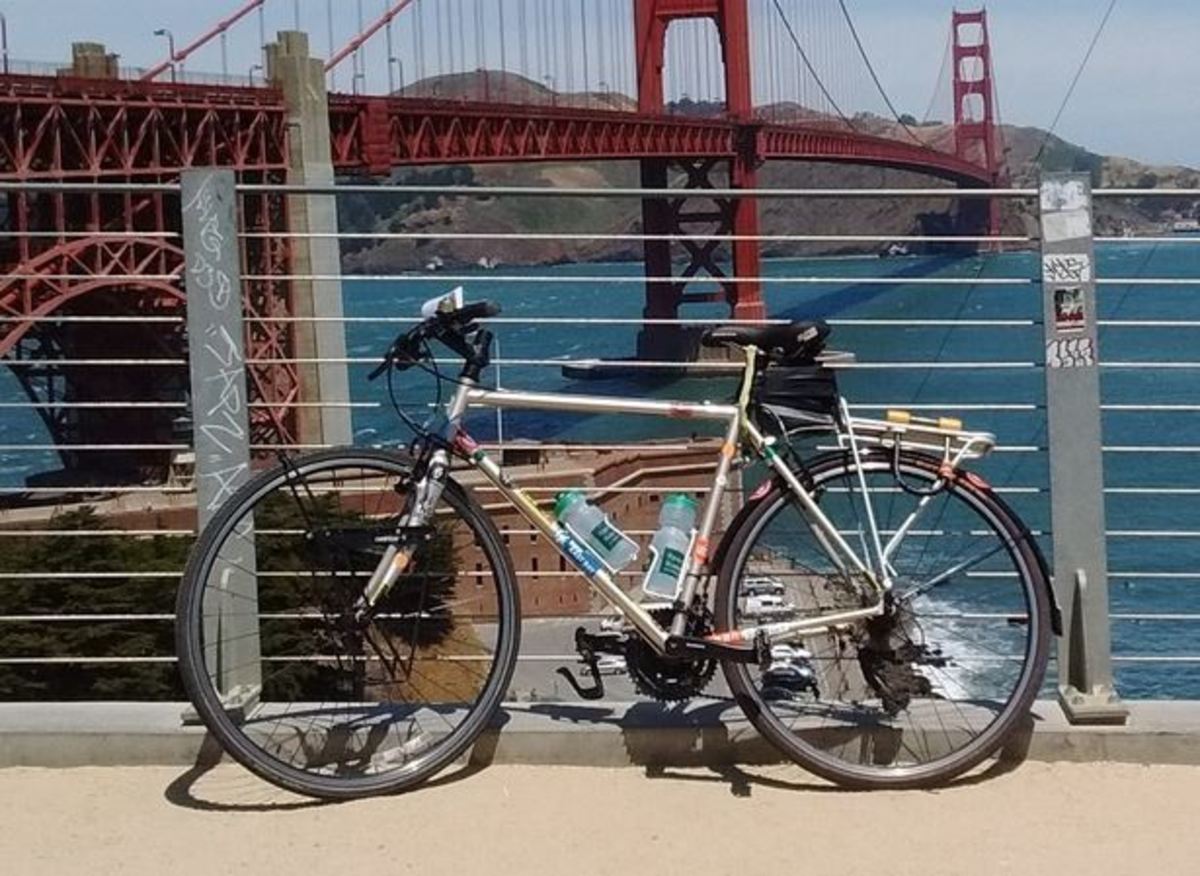 Muni driver turned in to lost and found! A MUNI recovered my stolen bike in the wee hours and called me.

A Bike Index user contacted me through this site to let me know they found it in their complex. If it wasn't for your site I don't know if I would have ever gotten it back! 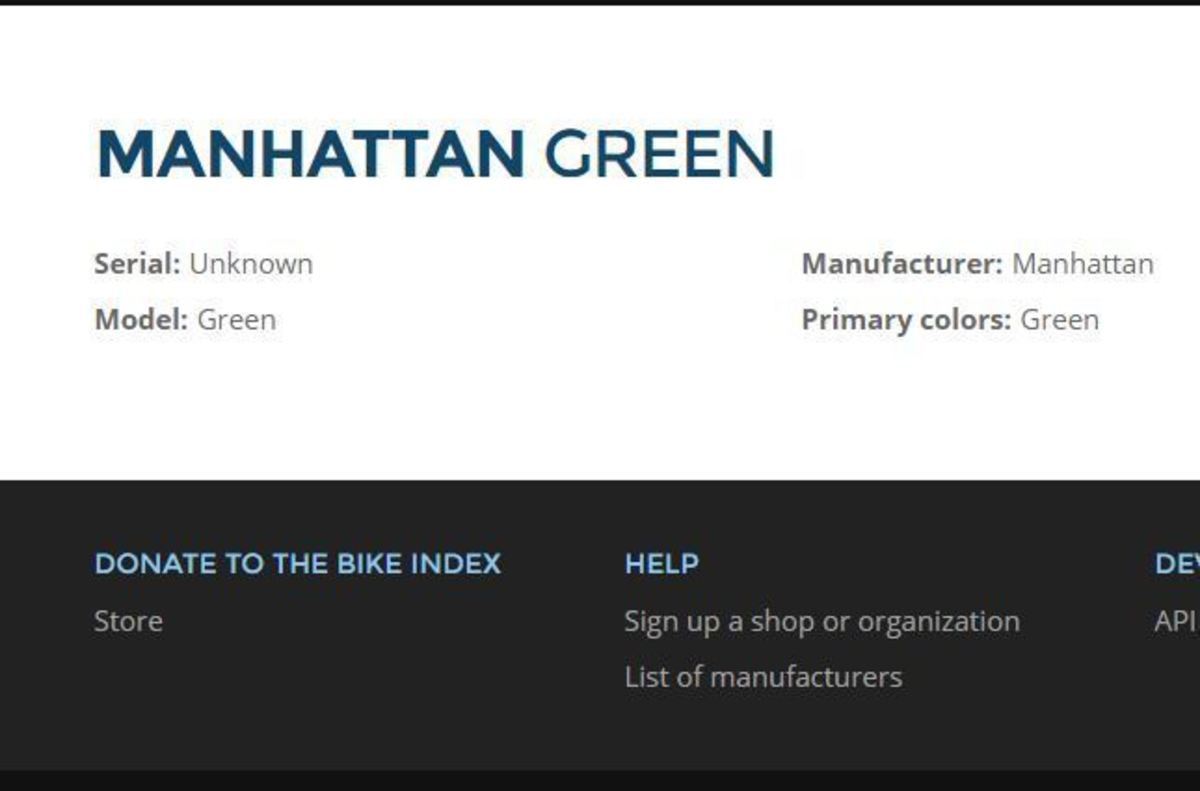 Recovered by Stolen bikes NOLA! Ed note: keep an eye on this spot re: Stolen Bikes Nola - they're doing awesome work. Methinks we're about to hear much more about this work very soon. ;) 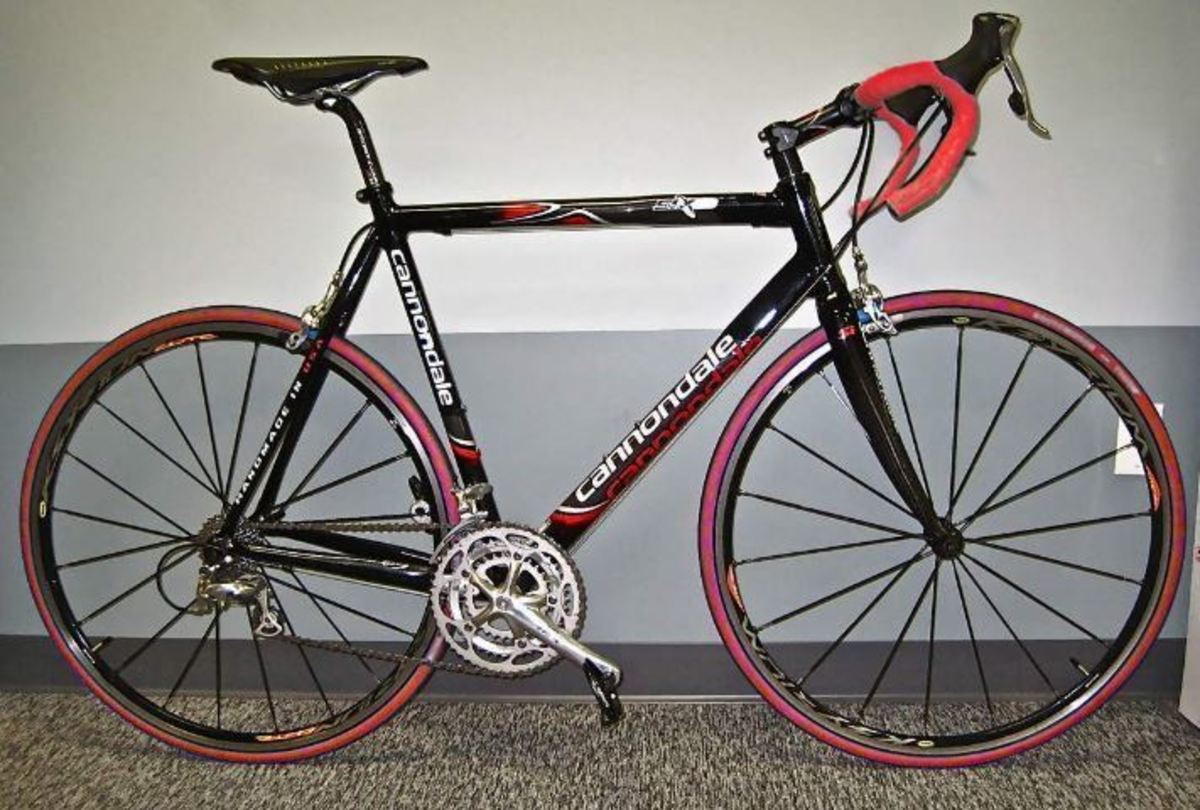 Bike was recovered someone found it at a pawn shop TWO YEARS after it was stolen and ID'd the serial thanks to this database :)! Police booked the recovered bike as evidence. They are now following up w/ pawn shop owner to try and find the person who was attempting to pawn it. No trace of my other bike (MTB) yet but yes, you can now mark the road bike as recovered (after 2 years ;)!). My hope at this point is that police follow the trail and catch the thieves. 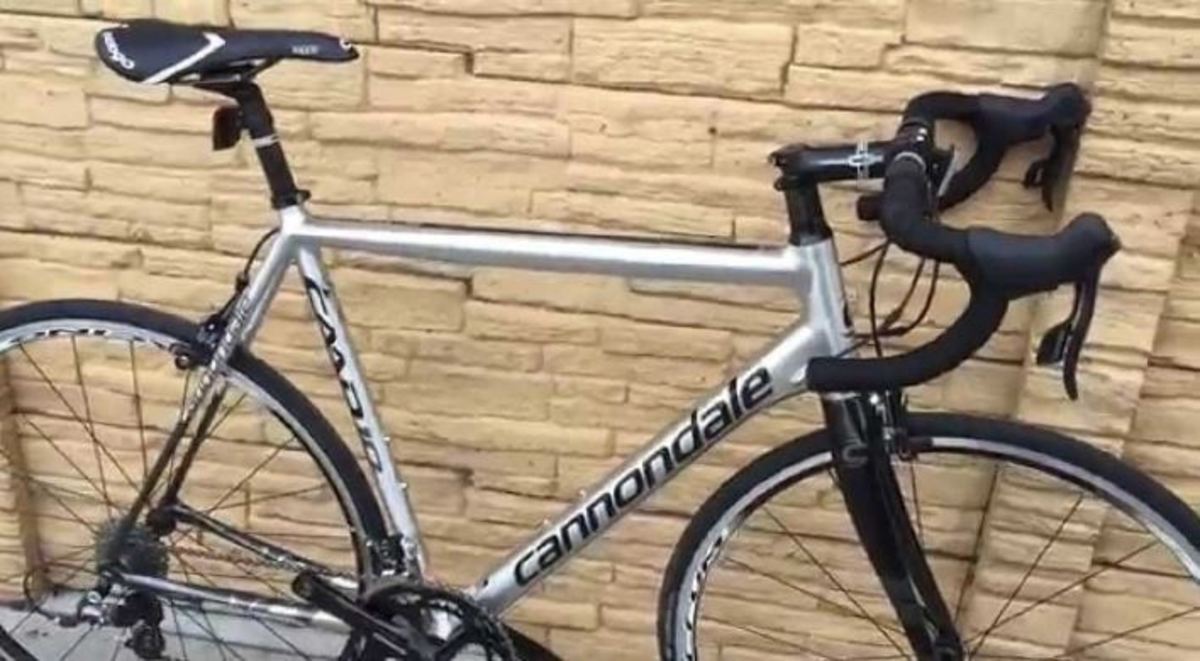 The thief apparently held onto my bike as his personal ride. A few days later, he stole another bike elsewhere and left mine in order to ride away. Later, he boldly returned to the scene of the crime to try and recover my bike, but was turned away by security and had his ID photographed. So we know who he is! I was still blown away to not only get my bike back but also have the thief identified. Never ever expected that. And here I wasn't sure it was worth going through the registration process. Thanks to you guys! 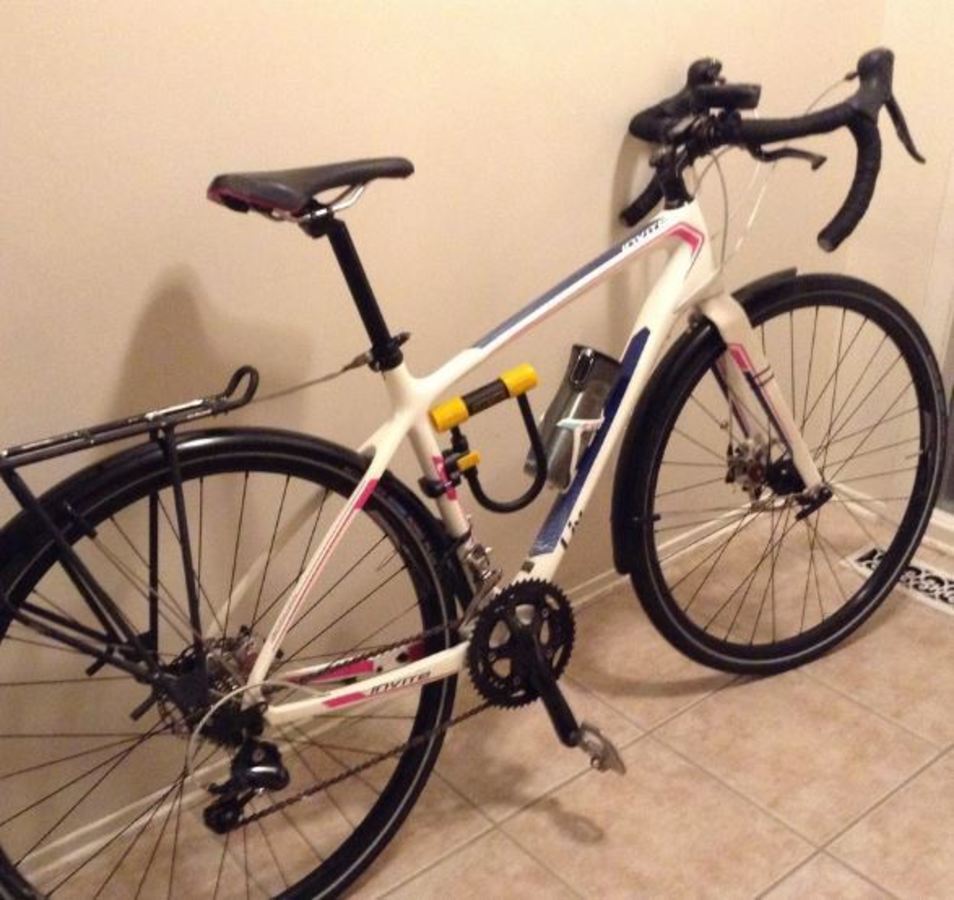 A good Samaritan got in touch with me through this site! Thank you! 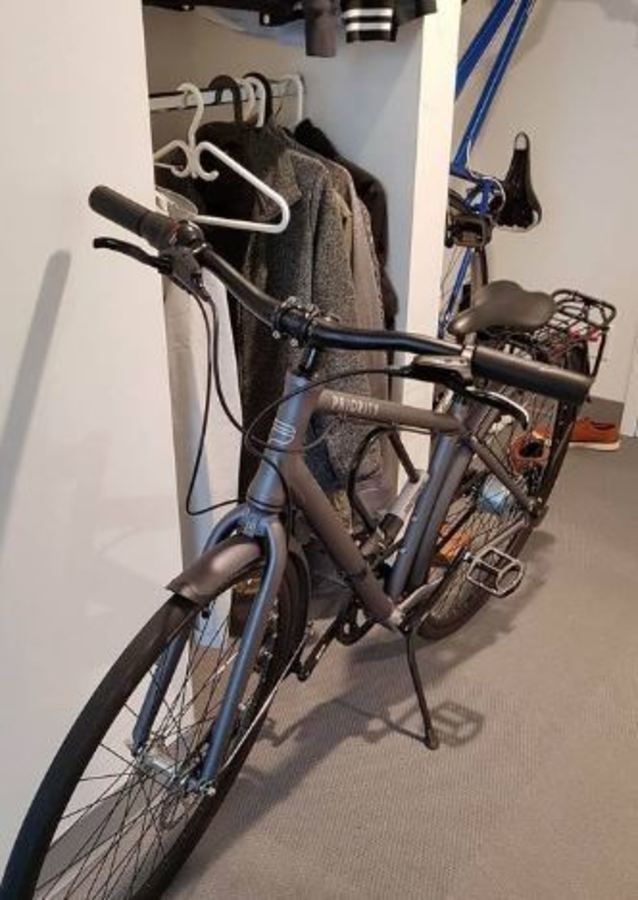 Hi there, I also had my bike stolen :( So I was searching for a cheap second hand bike to replace my stolen bike and came across *this* bike on craigslist which I bought from a decent looking man. He said that he's relocating to London so needed to sell. He produced to me his driver's card which I took a photo of. I had just found out that this is a stolen bike when I ran the serial # on bike index :(. I know the feeling of having your bike stolen as I just had mine stolen on Saturday ... 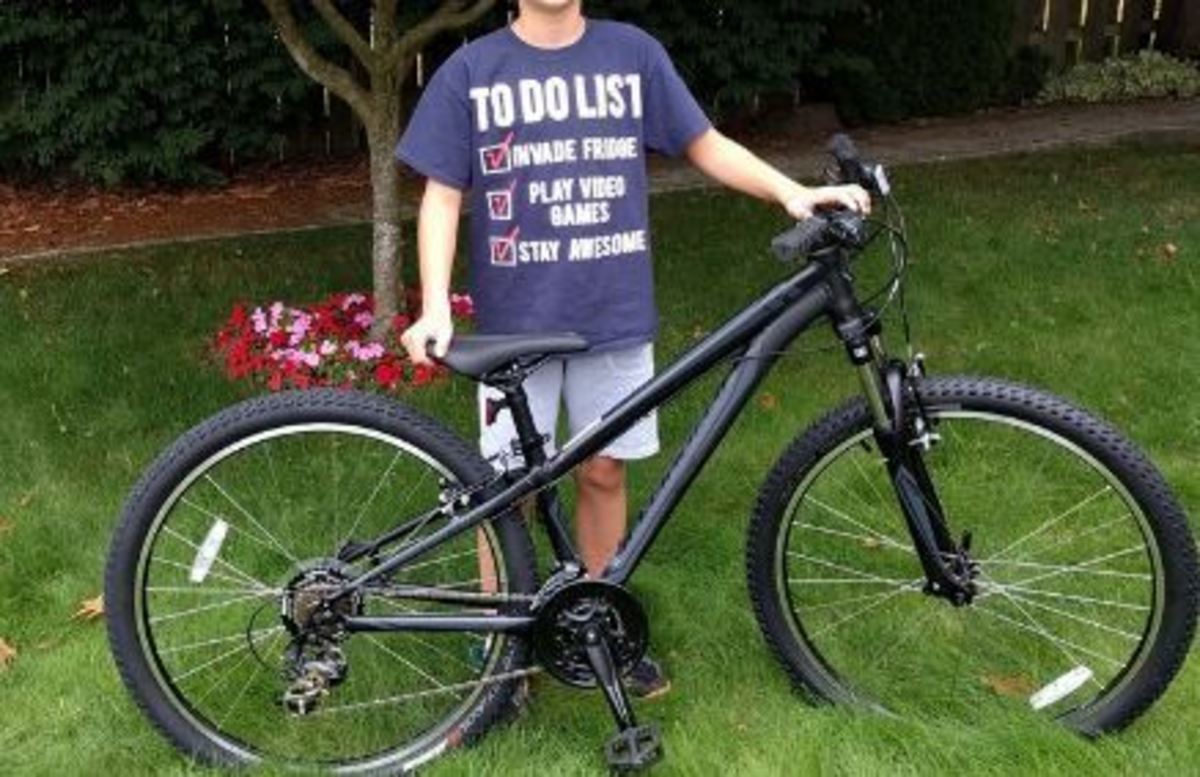 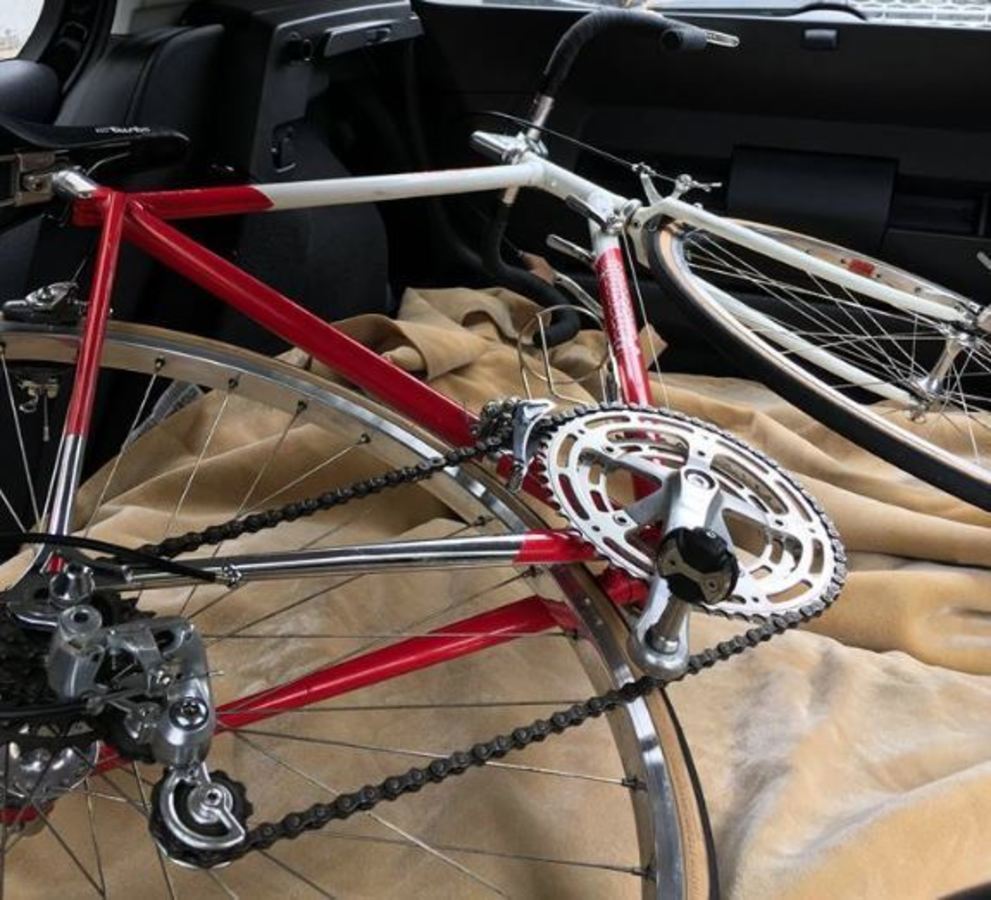 My Panasonic road bike showed up at the Alemany Flea Market and luckily another cyclist bought it and looked it up on Bike Index for my contact. Definitely a bummer she had to buy it off the seller but happy to have it back. Still keeping an eye out for my other two bikes, but so relieved getting this one back!

Police found it being ridden (redacted) ... A couple questions later and a check of the serial #, and I get a call that they've got my bike for me! 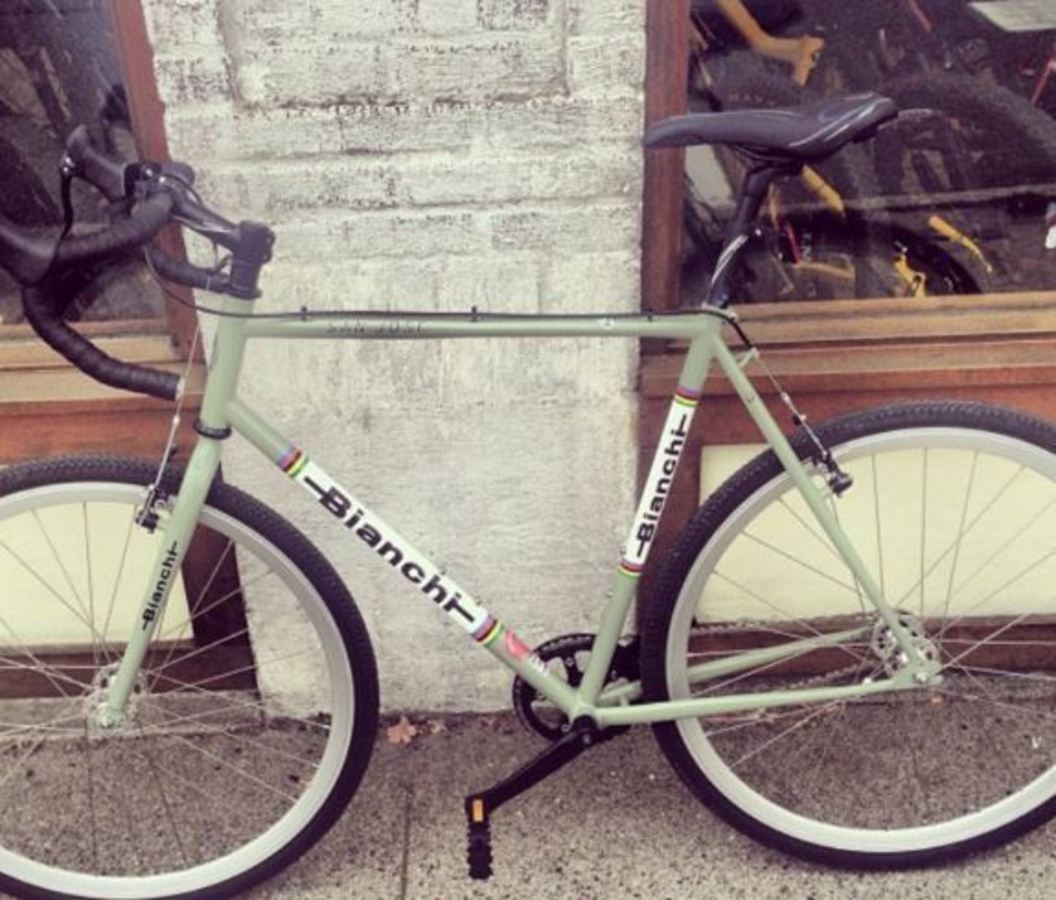 San Francisco Police Department found my bike in a park with thieves and searched the serial number online and found that I had listed it as stolen!

Someone attempted to bring this bike to a local bike shop (in Indianapolis) to sell it. Police were contacted and recovered my bike. 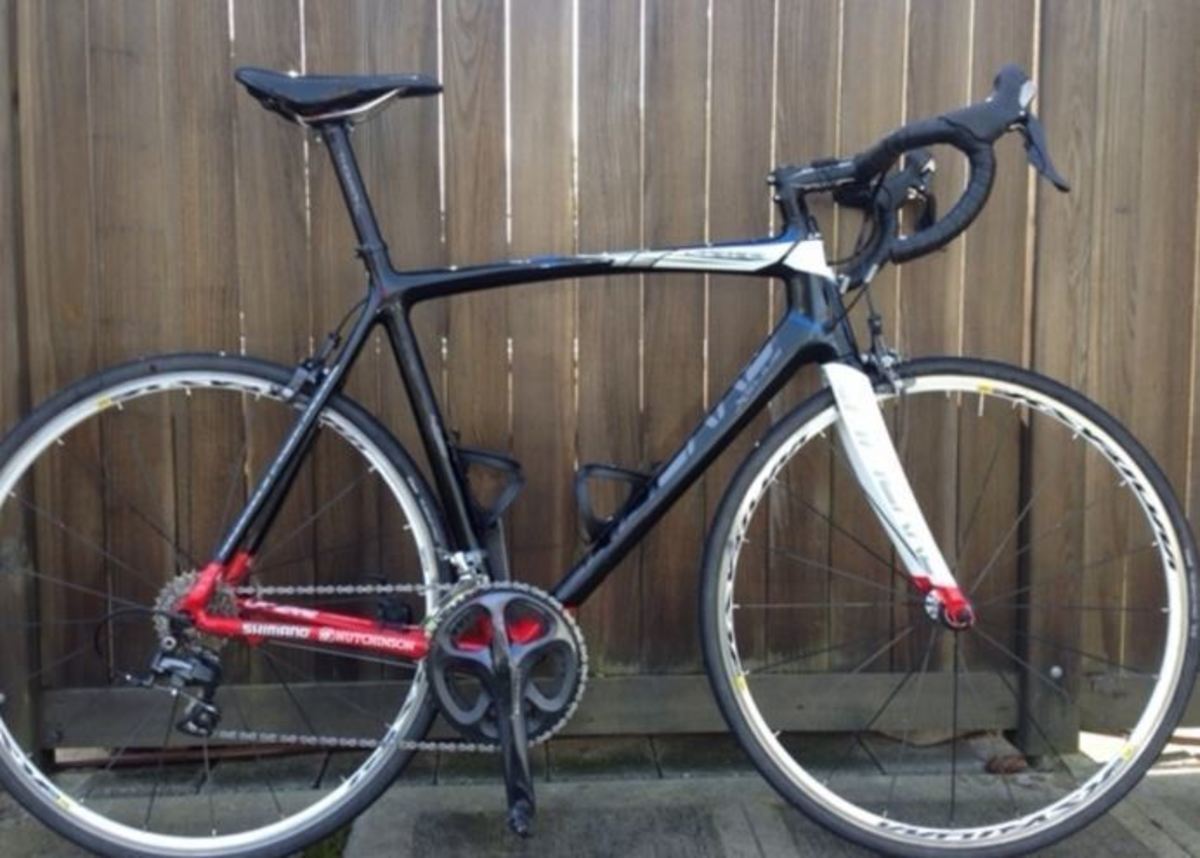 Someone said they found it, kept it for 6 months, then saw it on Bike Index and returned it. Thanks Bike Index !

Hello - I just found your bike in our building's recycling area... 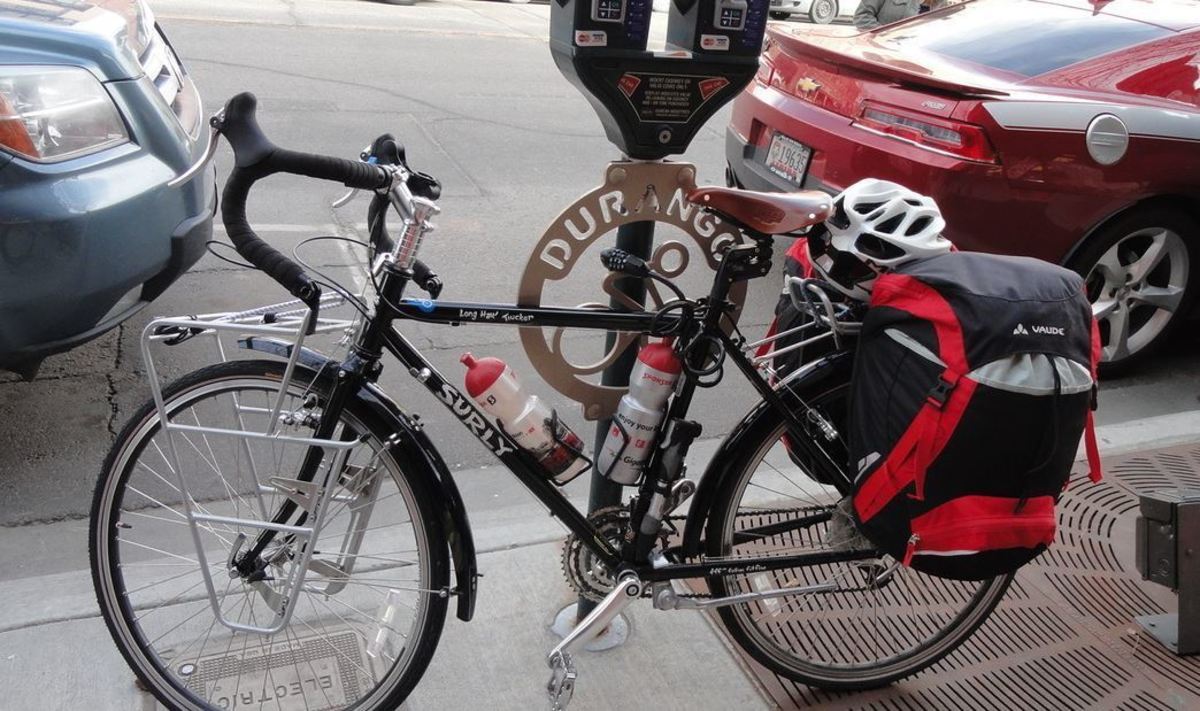 An absolutely stellar recovery story pulled together by DC cycling community that goes like this: 1) Cross-country riders (from Switzerland) have 2 Surly bikes stolen on the last leg of their journey, in DC 2) Months later, a Bike Index spotter finds one of the bikes for sale on Offerup (Ed: Because *of course*.) 3) We work with our new DC friends (thanks Chris O! good lookin' out) who call in MPD, who then were able make an arrest and recover the bike. This whole fortuitous series of events is then covered by DC's NBC4 in "Swiss Tourist's Stolen Bike Found, Fixed by DC-Area Cycling Community" 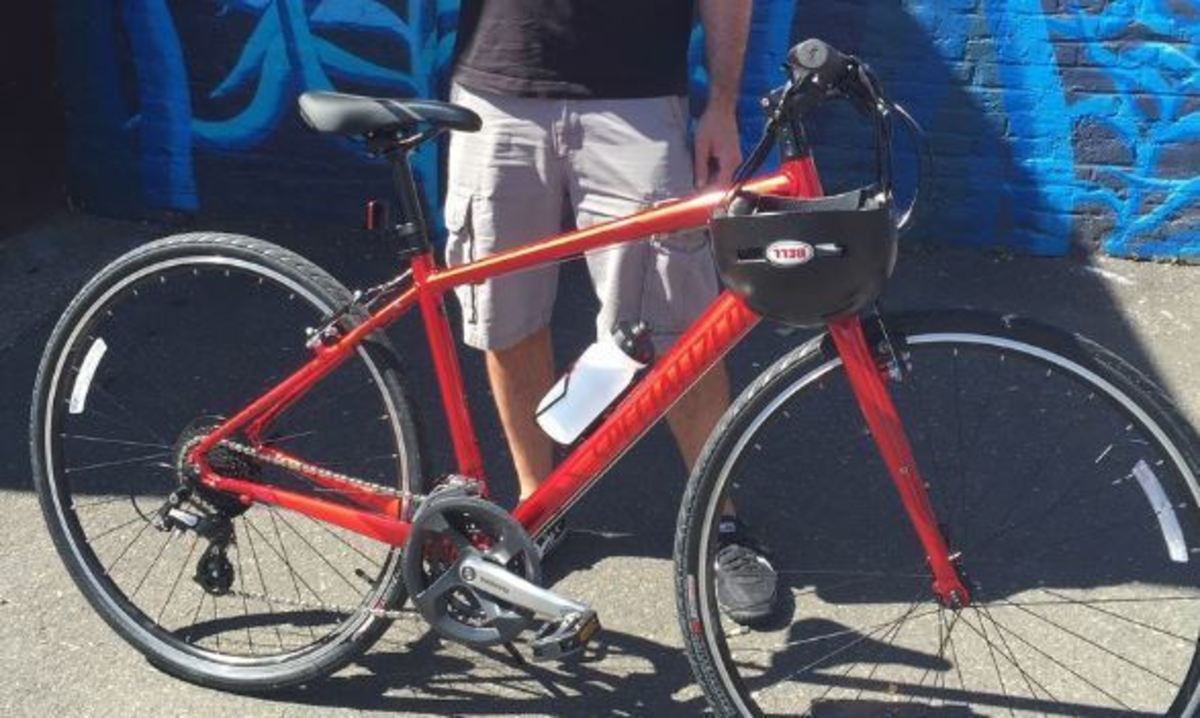 I am just reaching out to you to let you know that a person tried to drop off your bicycle for repair here. The police have been notified and are on their way. I just thought that it might be nice to know that it has been found. Thanks, (redacted) Holy Spokes 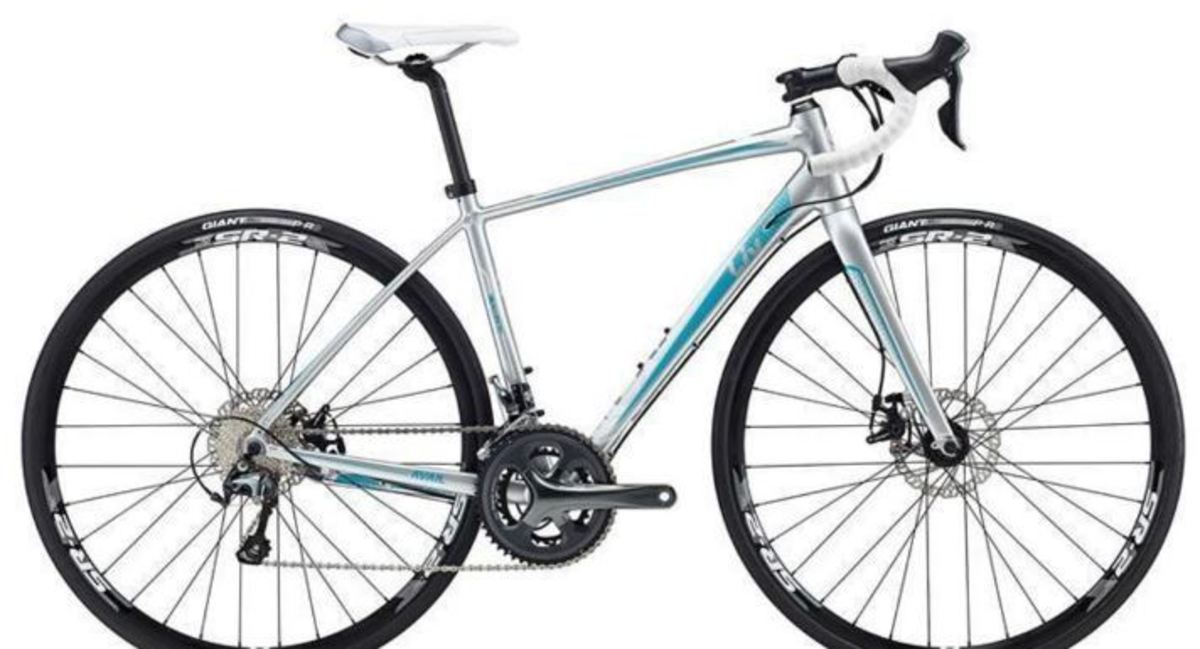 An off duty cop found it in a homeless camp in the city and used Bike Index to contact me. The bike was stripped of almost everything, but the shifters were still on it, at least. I think that there was also big raid, related to this - "Prolific bike thief, burglar arrested". 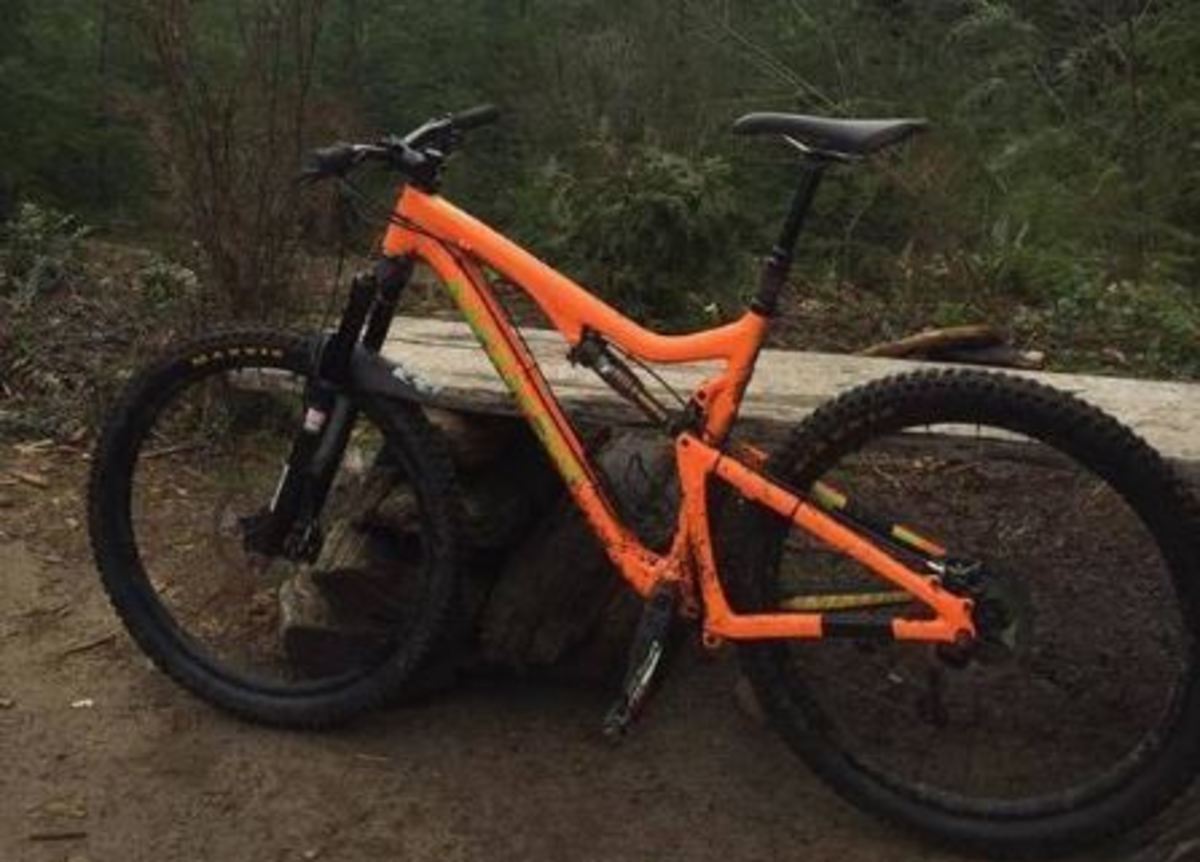 Good Samaritan "Mitch" saw this post after buying it from 'dealer' and returned it today. He was told by a friend of my listing on here (Bike Index) 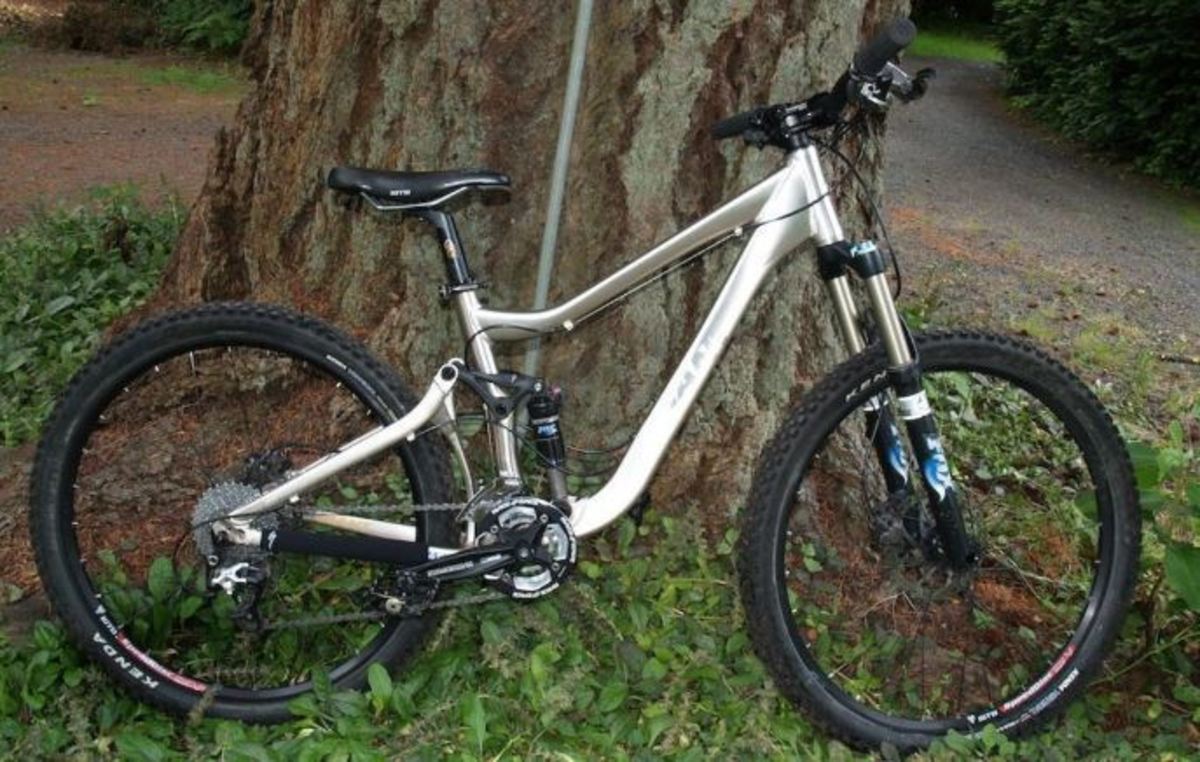 Police patrolled a homeless encampment and found a bunch of stolen bikes. They looked each up on the police records and Bike Index. Since the bike was stolen that morning, my police record hadn't been processed yet. They said if it wasn't for Bike Index my bike would have never made it back to me. Thank you! 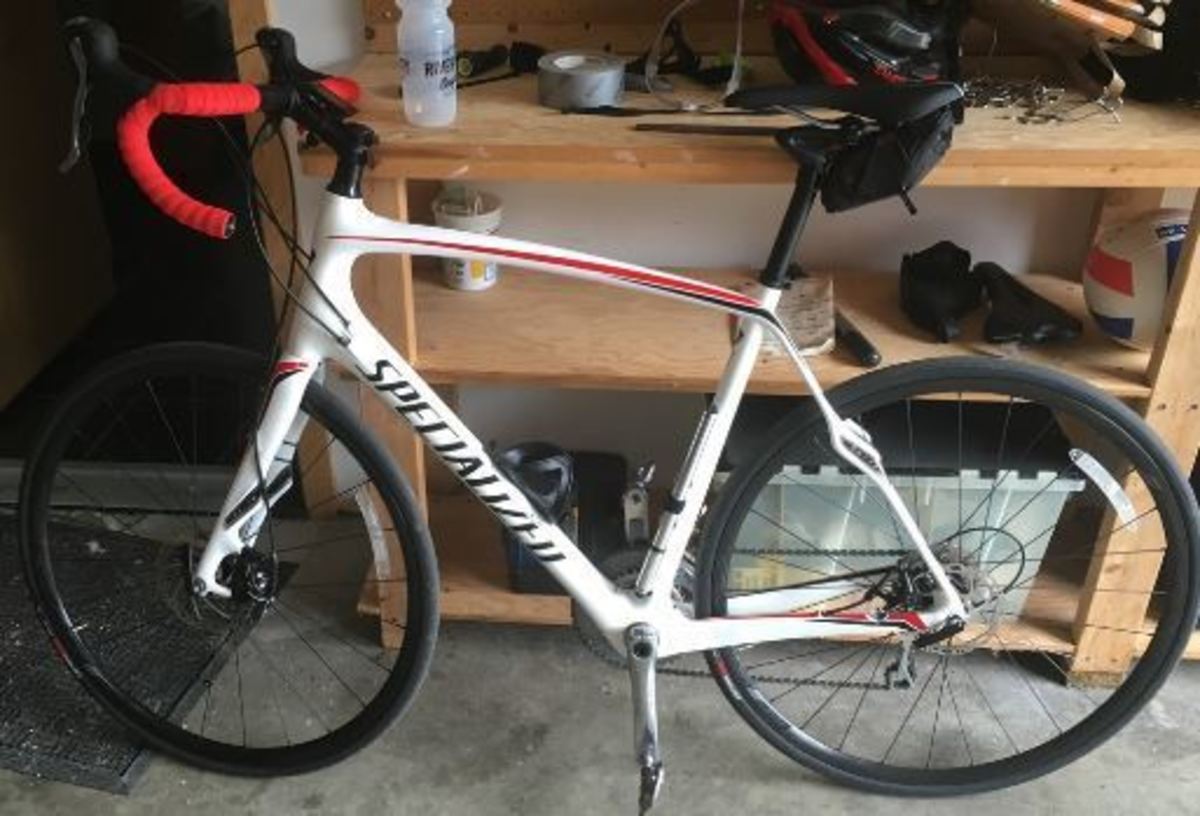 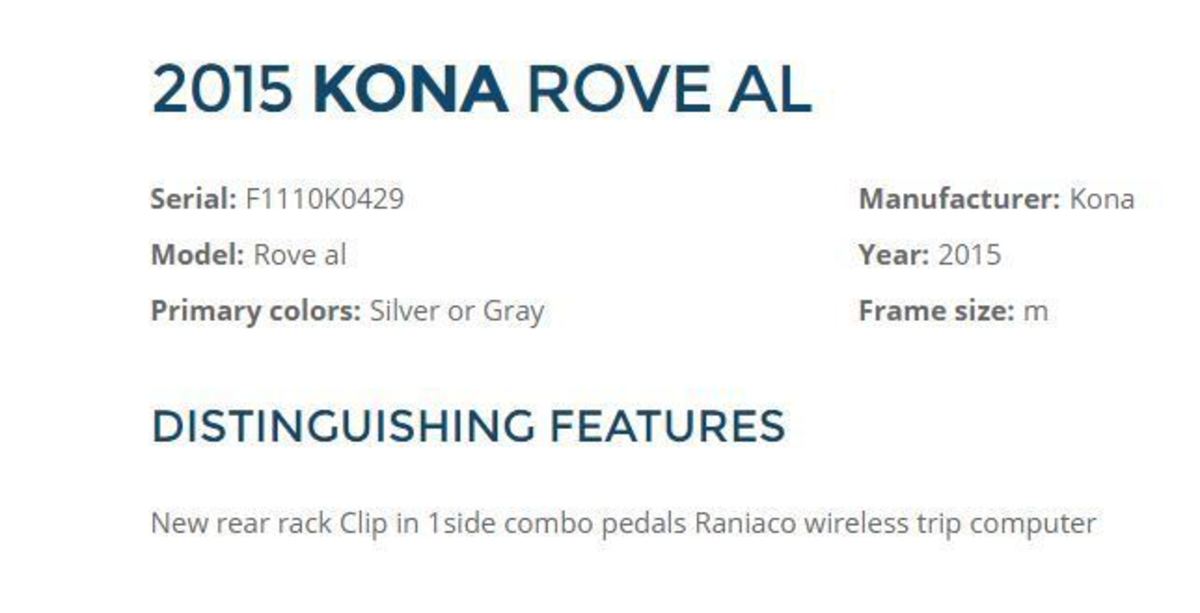 Seattle bike shop checked this registry while doing repairs and called me -- Thanks Recycled Cycles! 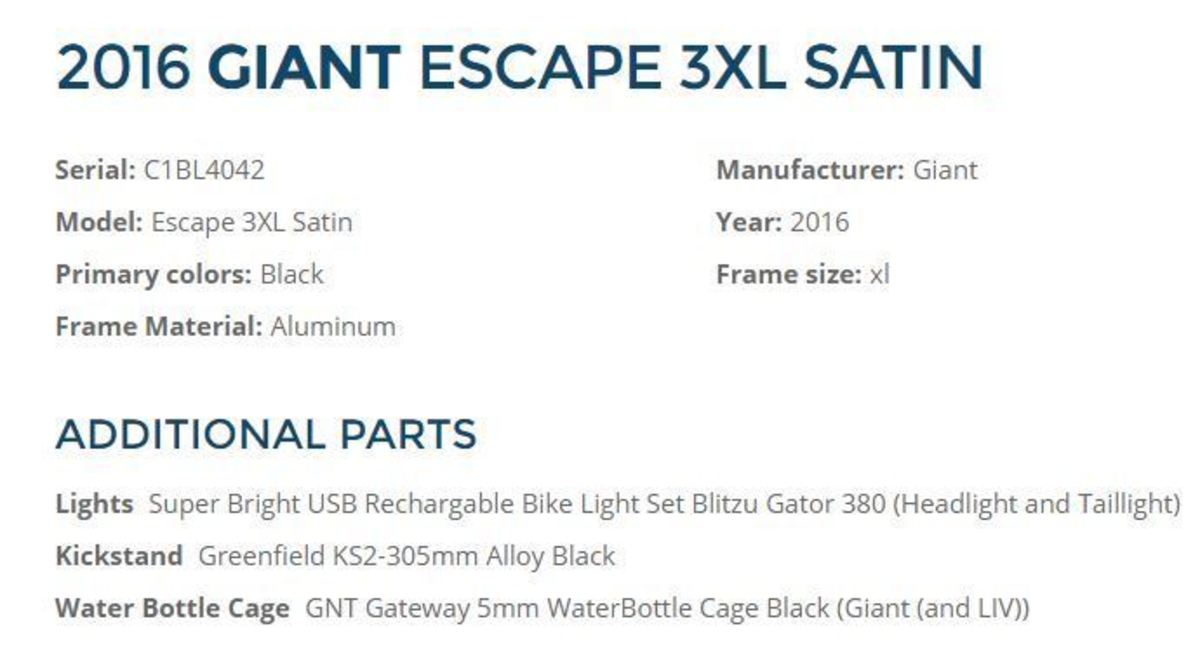 Police called after checking registration, found at a home with multiple other stolen bikes. 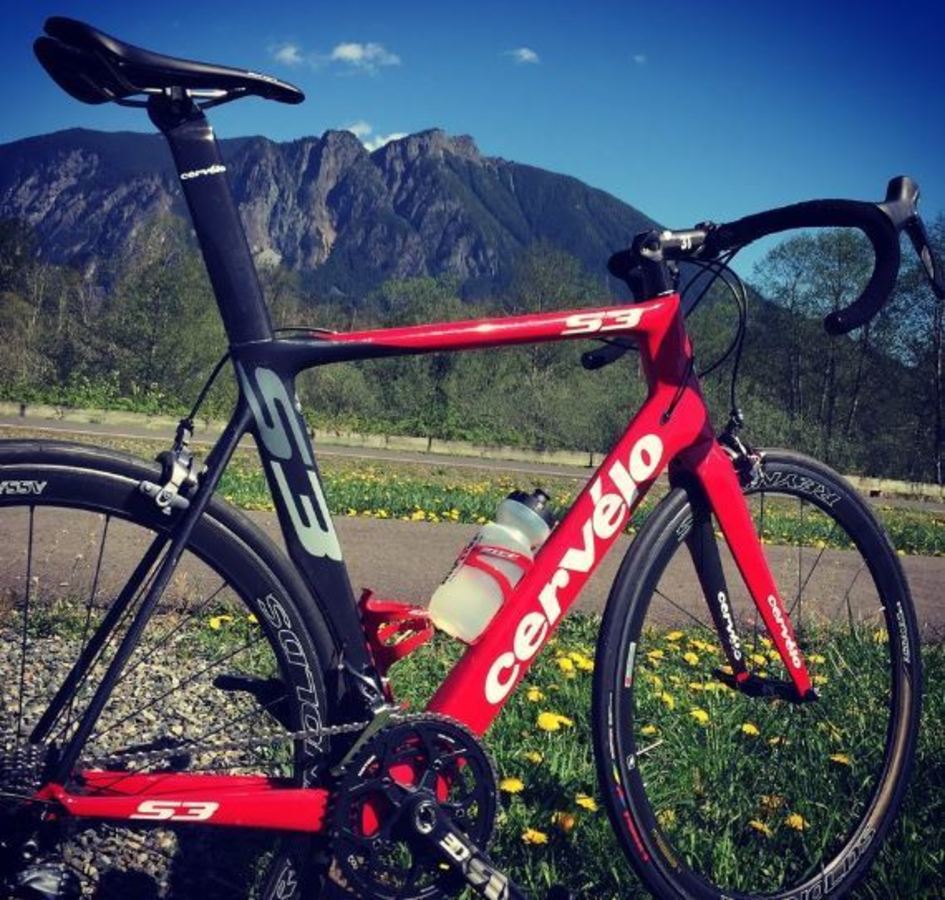 "Seattle police caught them ..." (Ed: little else known re: this one except we're happy to see SPD using social media more and more in order to identify stolen bike owners) 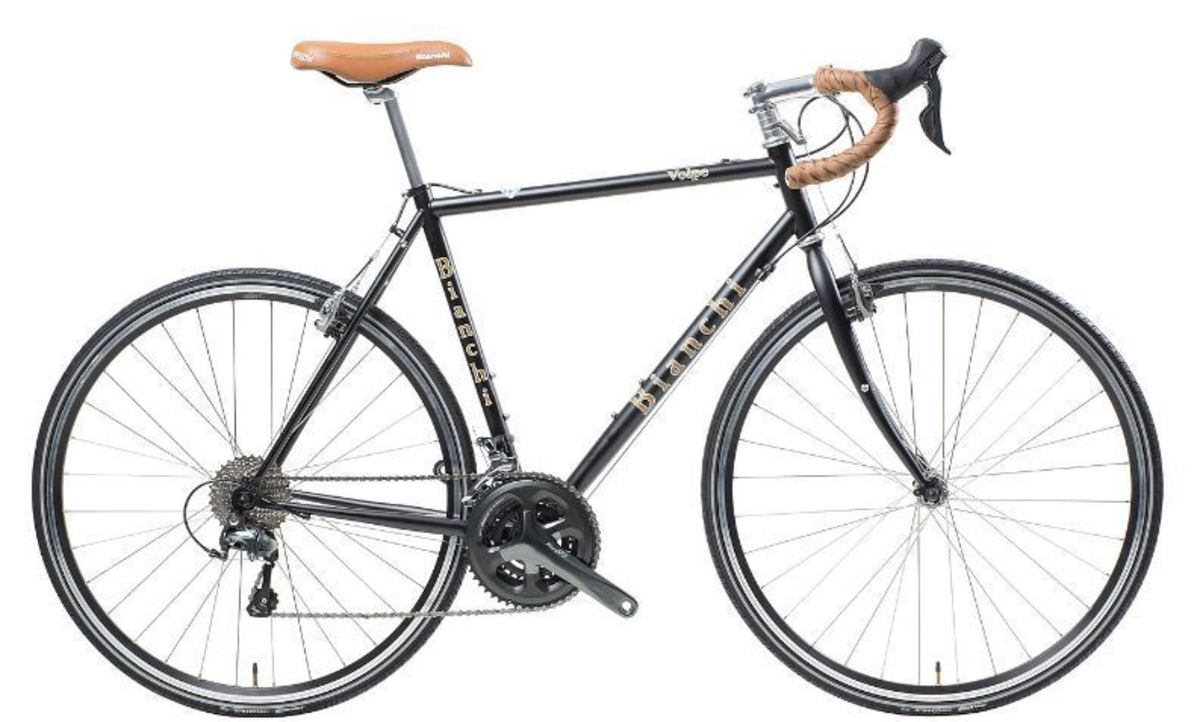 Bay Area Bikes called me, saying that someone had brought in the bike for work, and saw it listed stolen in the Bike Index. I confirmed the bike stolen, and forwarded receipt information. An Oakland PD officer later called me to confirm receipt, and theft details, and returned my bike! 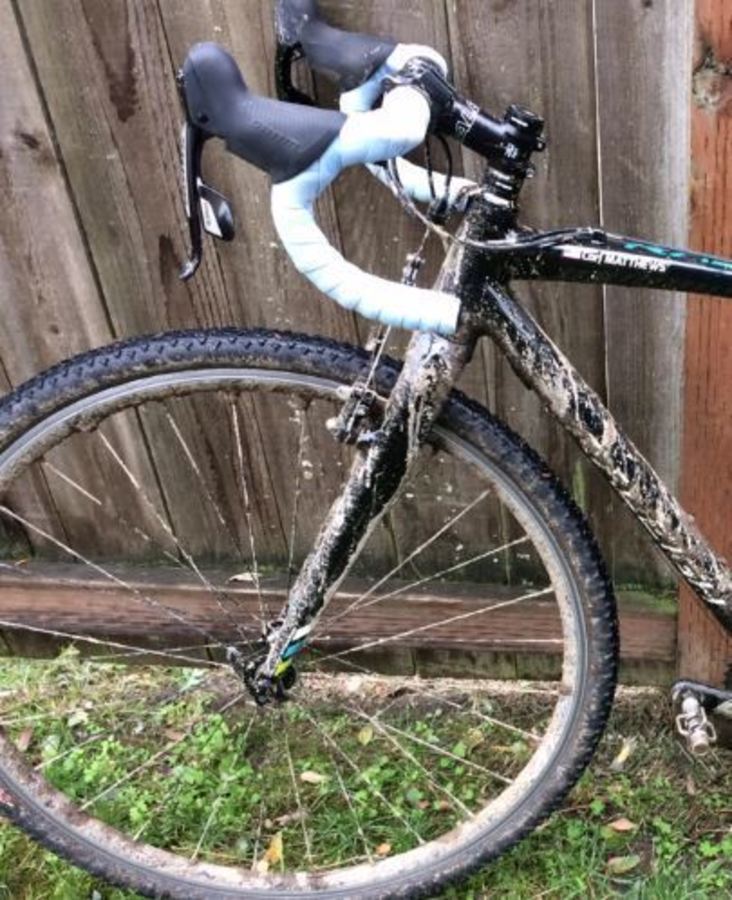 A police officer found my bike behind an abandoned house a few miles from where it was stolen. He found the bike on Bike Index immediately after he had recovered it! I had filed a police report at the same time as reporting it as stolen on Bike Index, but the poliece report for whatever reason, bid not show up yet, he did not even know I had filed one yet! He gave me a call using my Bike Index info, and my bike was back with me within a few hours of being found, Amazingly fast! They spray painted it grey! I've got to give the guy credit, he tried really hard to do a good job, removing the wheels, taping off certain parts to attempt a cleaner look and preserve the RALEIGH logos! He scratched off the part of the saddle that said "lady", swapped my pedals out with some sweet retro platforms, and added a sturdy water bottle cage and headlight. I feel so fortunate to have it back. Thank You, Thank You, Thank You! 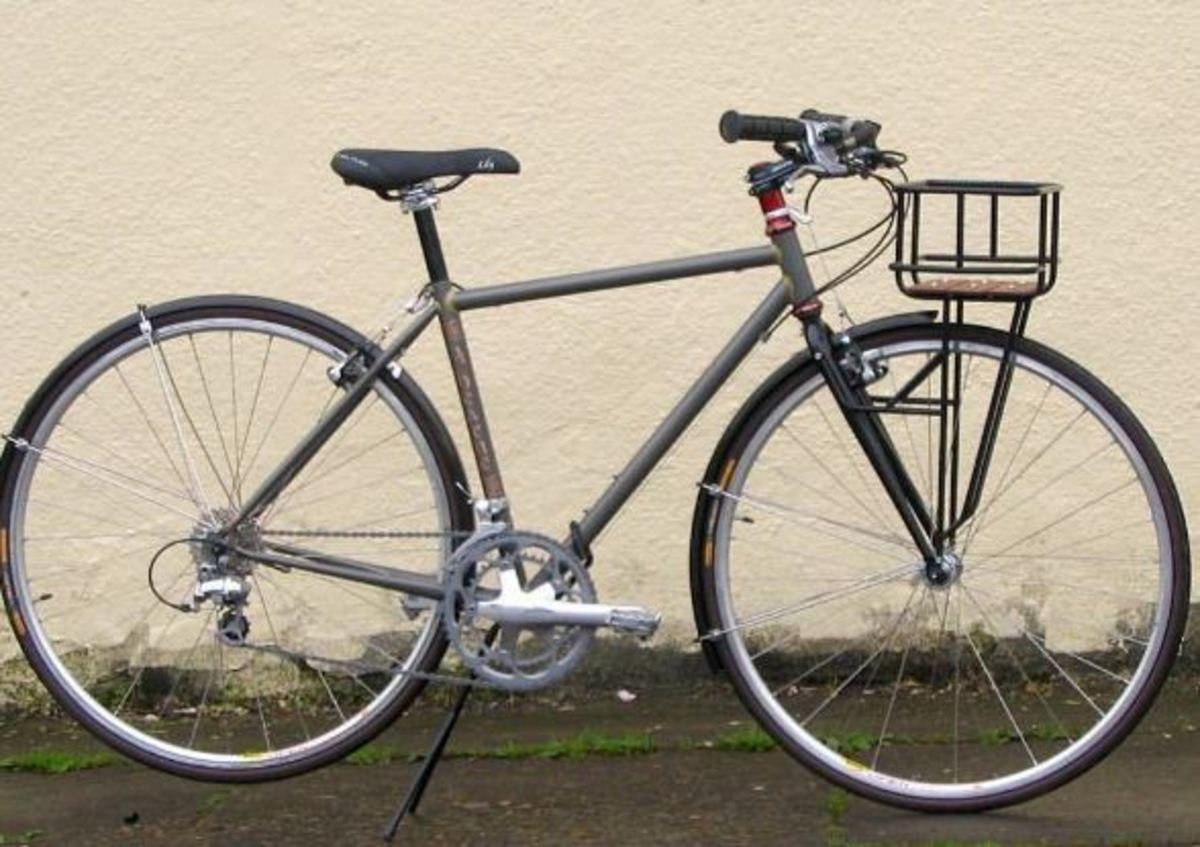 (Ed note: this single bike recovery tip led to all three of this registrant's bikes being located from the assumed thieves. Certain details omitted here to protect various folks.) " Thank you to those who are in the bike community and KNOW when they see something that doesn't add up and take the time out of their busy day to take action!!! I am amazed and impressed. We couldn't have recovered all THREE bikes without your help. "

An alert bikeindex.org member spotted it way across the city - where I never would have found it - and when I went to the location he saw it at, it was still there and I was able to recover it from the thief. 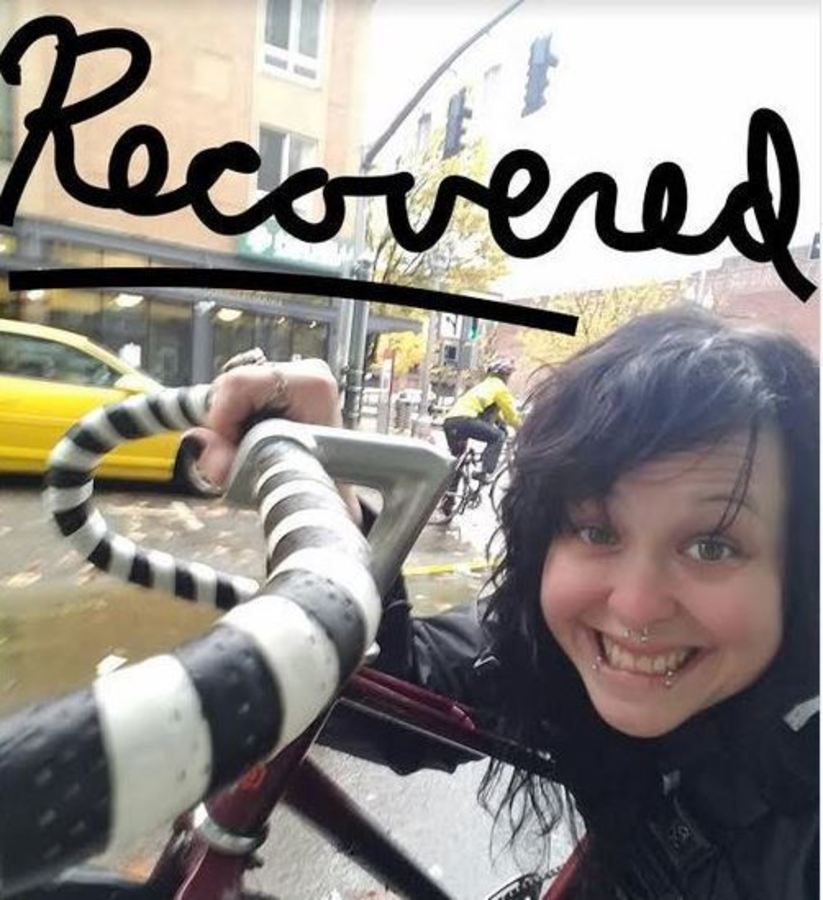 Ed note: just FYI we helped recover Abra's bike *even though she didn't register it on the Bike Index*. We only tweeted out a photo of Abra's sexy maroon black-and-white taped mixtie, which promptly alerted our friends at Cycle Portland when someone wheeled it into their shop. (They wrote this blog post about the recovery - be sure to check it out.) We kept in touch with Abra on Facebook during this recovery and it was pretty bananas - she's had the bike since she was 18 and was obviously blown away to hear it walked into a local shop. Also, we love her bike-recovery photo! 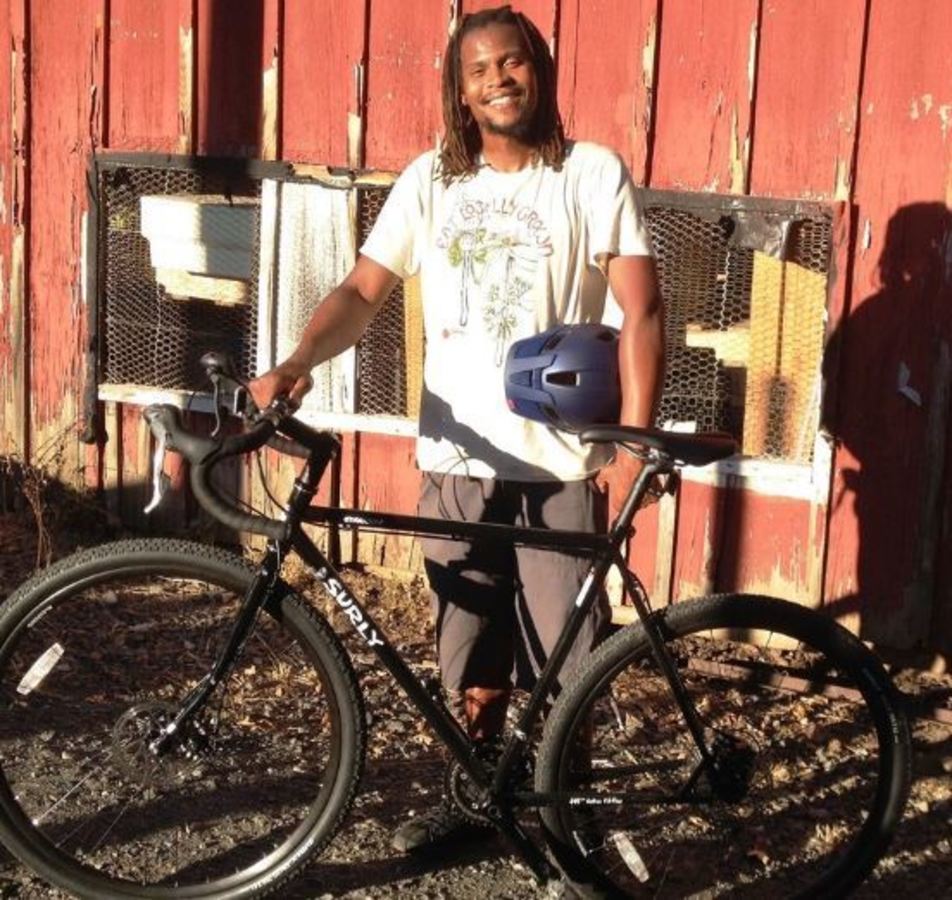 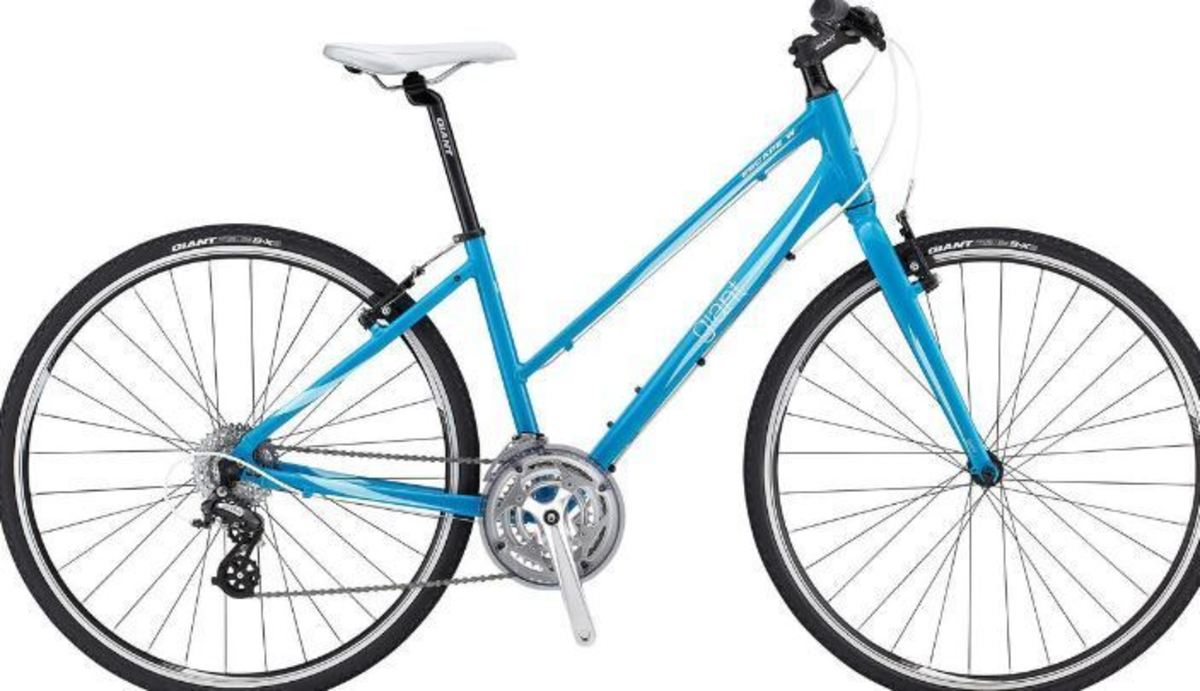 The transit police just found it!! Yay!! (Ed: it is unclear which city's transit cops this was) 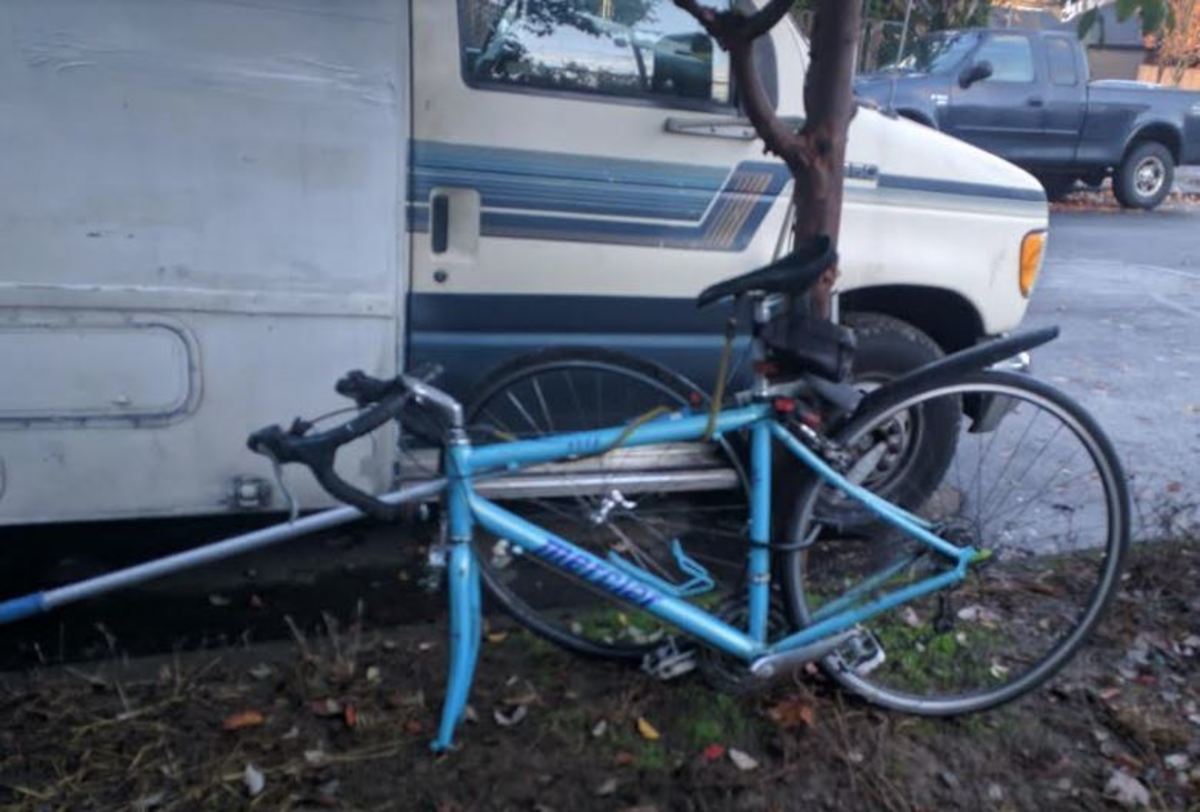 Tipster: "There is a blue Mercier that matches that photo (but with a different seat) locked up outside a camper that is squatting at SE 16th and Taggart." (Ed note: Portland has a lot of methy RV's that move from neighborhood to neighborhood, generally wreaking havoc, and this bike was spotted outside of one of such said methy RV's.)
Owner: "I got an email from Bike Index letting me know that a bike that matched mine had been seen. I drove to the spot, and knew immediately it was mine. It was locked to a tree. I called the police and they dispatched an officer who was incredibly helpful. I was able to prove to him that the bike was mine. We called a locksmith who was able to cut the u-lock, and my bike has been returned. I am elated and so thankful for Bike Index!" 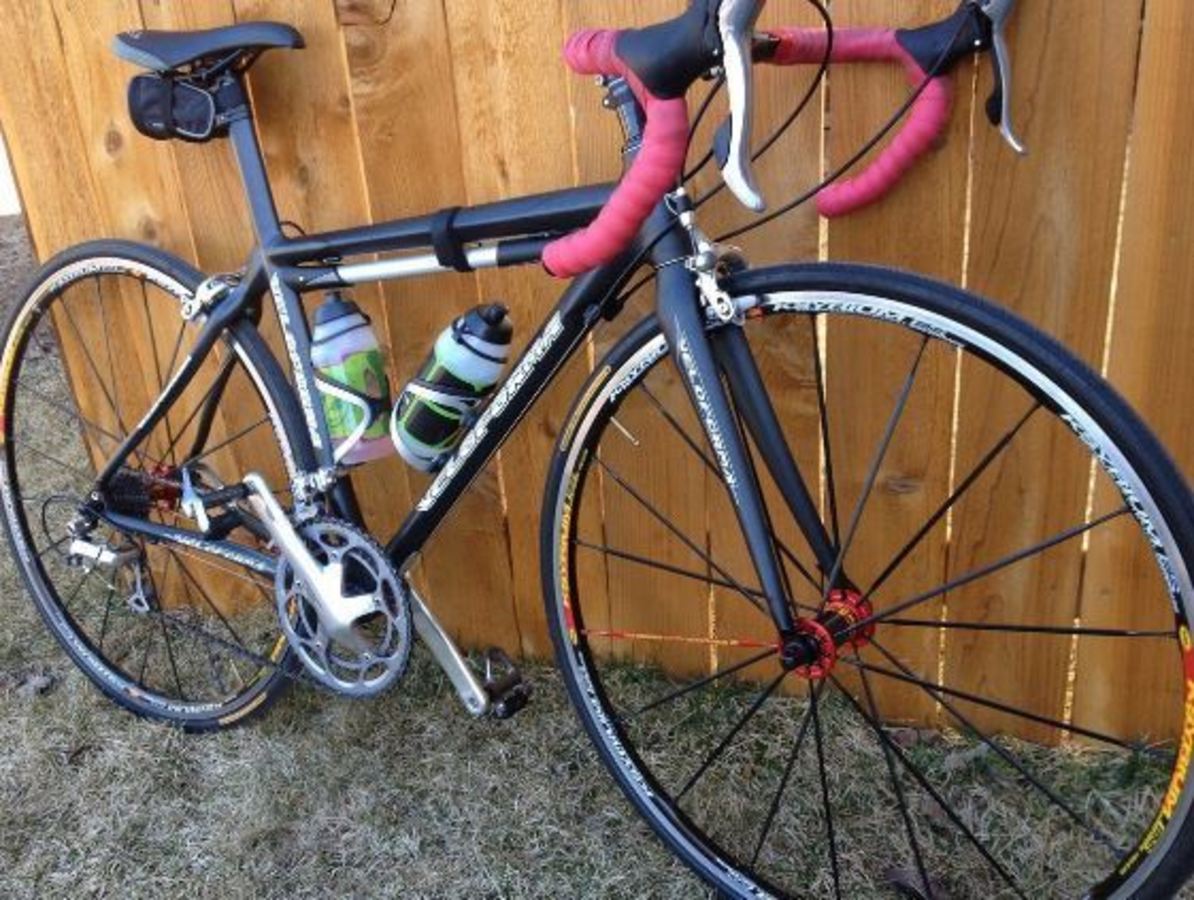 (Ed note: this is one of our first recoveries by our friends in Bend OR.) "A huge Thank You!!! to Pine Mountain Sports in Bend, OR who spotted it for sale on Craigslist, and for the amazing work of Officer Tim Williams of the Bend Police Department for his diligence and perseverance in locating it and seizing it from the perpetrators! It takes a village and I am forever grateful!" 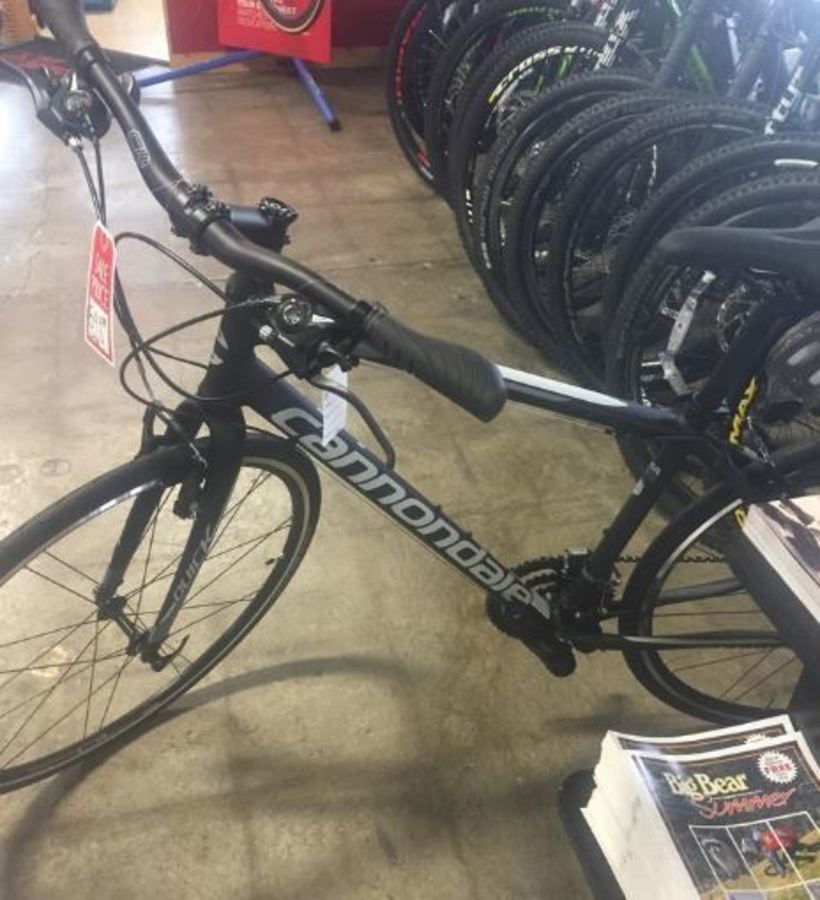 "The guy sold it to a pawn shop. We went right to the cops and they found our other bike had been brought by an employee there also. The guy who stole them has been arrested as he was found to have other car break ins in the area. Remembering to have the serial numbers and pictures is a huge help! We only owned our bikes for a month before they were stolen so looking forward to getting more miles on them ourselves."

And that's it for October, folks! Be sure to keep your bikes safe and I'll catch you in November. PS - In case you missed our big announcement regarding pawn shops, check out "Bike Index Partners With Leadsonline!"