Most of the nation was busy freezing its face in November, so bike theft reports did indeed finally drop a little here at the Bike Index … but we still helped hook up a bunch of great stolen bike recoveries.

Before we get started - Recall that Bike Index is a 501(c)(3) non profit and as the year comes to a close - we could really use your help.

It's pretty painful - we monitor thieves who fence stolen bikes online - and they make more cash on a single stolen bike sale than we get in donations for a whole month. Even though we'll recover 40+ bikes, it seems that people just really don't want to pitch into this effort - even after we've helped them pull a bike-sized needle out of a city-sized haystack.

And I won't lie - it's pretty demoralizing to recover somebody's $4000 bike - and only get a $5 donation. But, hey, we love catching thieves and finding stolen bikes, so we keep at it.

Point being: We would love it if you could donate to the Bike Index. Please help us keep these recoveries coming by donating here – tax deductible, too! We would appreciate it hugely if you did.

Now - onto the recoveries: 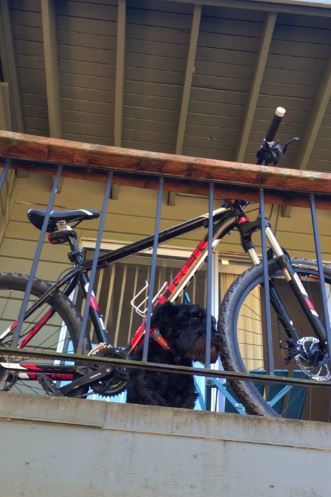 "Cycle Portland got pinged back to my bike. Love this site! Saved me $500" (Editor's note: Cycle Portland is awesome, and has recovered lots of bikes. Keep up the good work in 2018 guys) 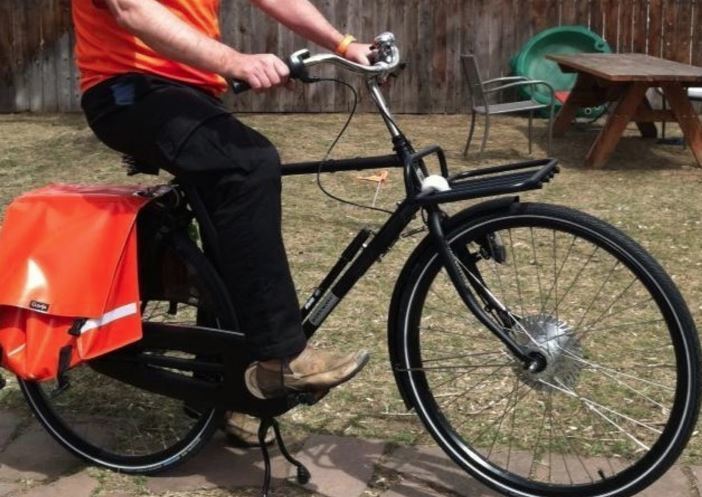 "Neighbor found the bike and brought it to the police station. He then saw the posting on Bike Index and called me (the owner). After several calls with the police over a four week period they finally located where the bike was (all the time in their possession) and I was able to pick it up. Big thanks to the finder for calling me as I have little confidence that the police would have matched the bike with my police report..."

"A guy that works at JRA bike shop on 85th found it discarded without wheels in an alley on the to work. And brought it in. The irony is that I had shopped for a replacement at JRA the day before and told him my story and they put 2&2 together and called me..." 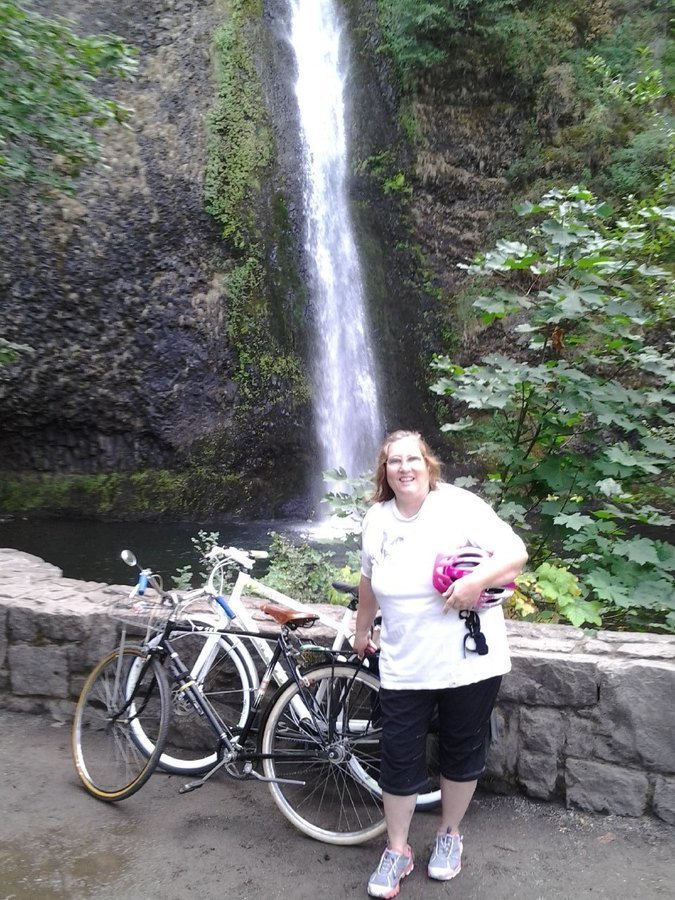 "Bike was recovered thru police intervention and local pawn shop cooperation. Thank you Bike Index for watching and noticed a connection via a pawn shop. I had to go thru the insurance company and police dept to recover the bike. I am glad I took the time to list my bike on the Bike Index, the pawn shop was very cooperative." 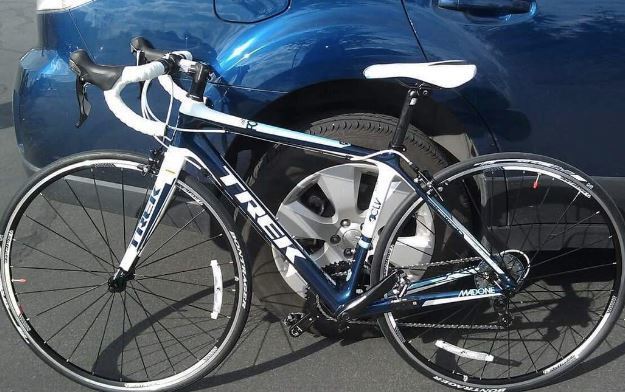 "I found my stolen bike listed on Offerup.com about a month after it was stolen. I set up a meeting and called the cops to go with me." 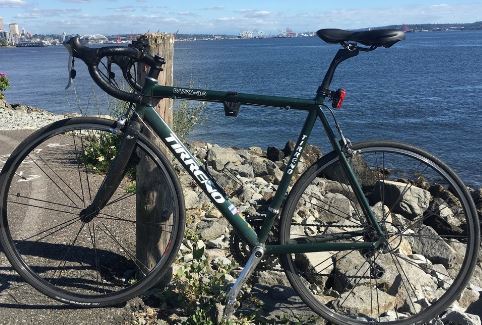 "Recovered by a Seattle Police Officer, and ID'd in the Bike Index..." 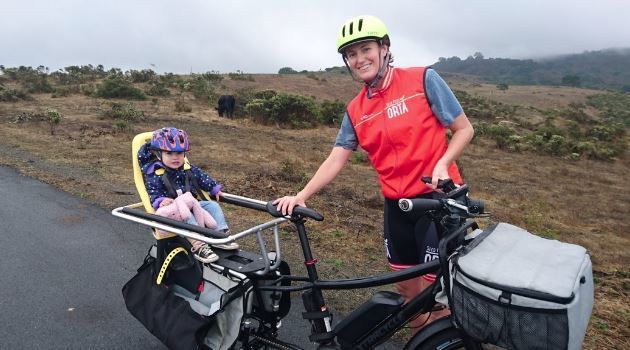 "It was for sale at the Laney College Flea Market. An excellent person named Tom spotted it and contacted us via Bike Index. It was our bike, and it is safely back home! Thank you so much Tom, Bryan and Lily! Anne and I, and our daughter Eleanor who rides on the back of that bike are so grateful for your help. We really owe you a favor ..."

"My bike was found by Portland Police with a homeless person. It was returned to me in relatively good state..." 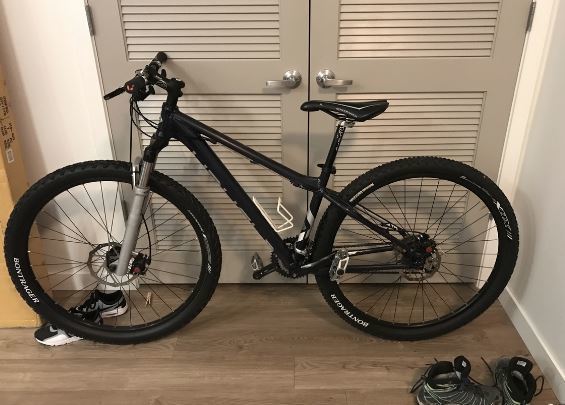 "A Good Samaritan found this bike ... " (no other details supplied)

"Found on eBay, traced it to a pawn shop. Police recovered the bike!!" 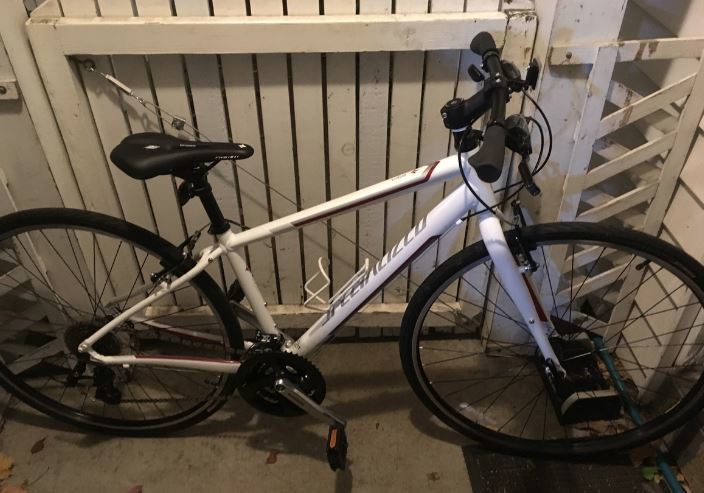 "Awesome job Bike Index, Deputy (redacted) of the Clackamas County Sheriff's Dept. and USA Pawn in Milwaukee! USA Pawn checked Bike Index immediately, determined that it was probably my daughter's bike (the serial # was off by one character) and managed to get the seller to abandon it. I just wanted to thank you, Bike Index and The Clackamas County Sheriff's Dept. for your help in recovering my daughter's bike! Bike Index worked awesomely - the people at USA Pawn said they checked Bike Index immediately, and even though the serial # was off by one character, they grilled the guy trying to pawn it and I guess convinced him to abandon the bike. Kudos to them as well!"

"This bike was another Clackamas County Sheriff's Dept. recovery... " (no other details) 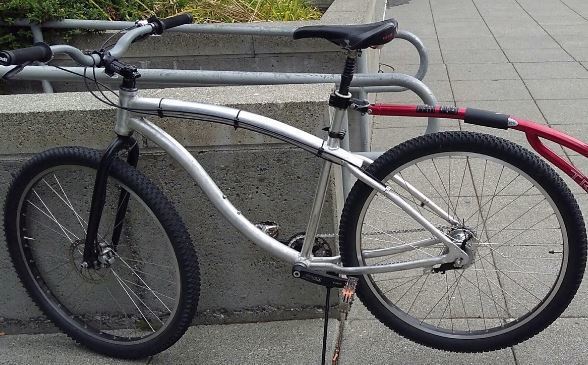 "Police recovered! I never even got around to the Police report. The (Seattle) police officer told me he uses Bike Index all the time, ... he saw it near a homeless camp. Checked Bike Index. Found it. Called me! I had given up. Got it back one month to the day from the theft."

"Hi, I believe we have your bike at our school. The S/N is one character off what you have reported but is a similar character (5 instead of S). If you can verify the frame size I would love to get your bike back to you. I have it locked up, so it does not get stolen again..."

"A good Samaritan saw someone riding the bike on 145th and Division in Portland and thinking it looked suspicious offered the person cash for the bike on the spot. The thief/seller accepted way, way, way under market value for the bike. They then checked the Bike Index, saw my listing, and got in touch. I got the bike back and reimbursed him the next day." 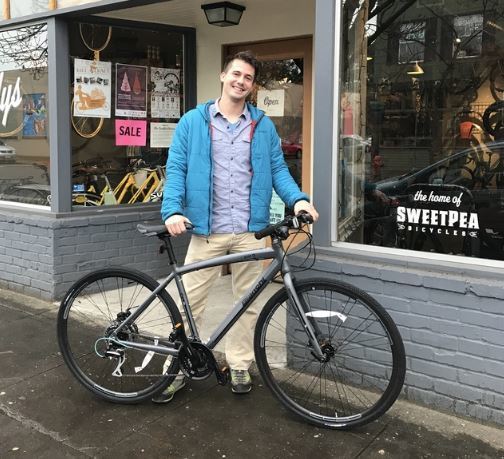 Editor's note: this story was nuts - the owner shown here bought his bike at the excellent Glady's Bikes in Portland, OR - only to have it stolen literally hours later from a smash and grab in downtown PDX. There were some murky surveillance photos of the thieves, and this theft got some media attention as well. Turns out, Portland Police had the same thieves linked to another robbery --- (Email from another victim) - " I think from the pictures you have on here, the couple who stole your bike are the same ones who took multiple bikes from the Boatyard PDX building where I live. Just got msg that they have been arrested by PPD, I hope you will get your bike! Detective Chamberlain apparently recovered multiple bikes..." (Owner) - "The detective told me her name was (redacted) and was arrested in Beaverton - her backpack was full of stolen clothes with the security tags on them, the sweater she was wearing had a security tag on it ... ****s only scratched half the serial number off. Lazy bums." (Later, a nice note from the victim's wife: Just wanted to let you know that Bike Index gave my husband hope and confidence that his bike would be found. As you know—it was recovered. It was a horrible day to see him soooo happy after making the purchase only to get so sad when seeing that it had been stolen a few hours later. It broke my heart. Had it not been for Gladys Bikes we wouldn’t have known about Bike Index. This site also helped ease my mind as I was ready to pack my bags and move back to TN because the theft actually scared me. I’ve never had anything stolen from me before and I sure as hell have never seen my husband so bummed. Anyway, the site helped me to not take the theft personally and that it happens literally every day—sadly. Also, thanks for reaching out to Patrick. We are overwhelmed by the help. And of course by Gladys Bikes as they weren’t going to let Patrick go empty handed. But even if that were the case I would still buy a bike or two from them. They were definitely the nicest people." (Editor's note: Gladys Bikes folks definitely are the nicest people! ) 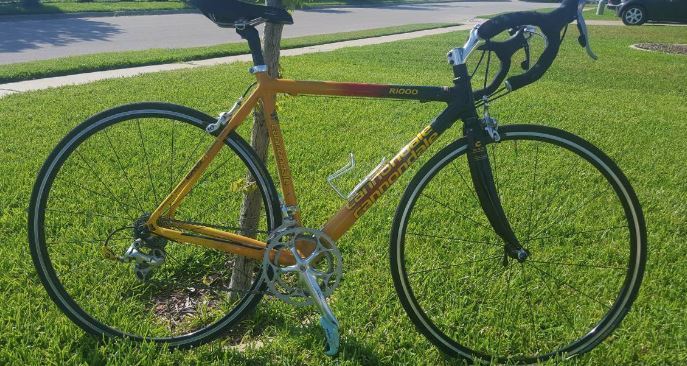 "Found a post on Craigslist, reported it to Police. They arranged a meeting with the seller and recovered the bike."

An awesome PDX rider spotted this stolen bike outside of a fairly well known and problematic encampment/transient location and called it in - "This bike is on the front steps of Sunnyside Methodist SE 35th and Yamhill as of right now. I'm calling non emergency to notify. I'll post up in the park for a few minutes to watch it."

"Seattle police called my wife last week. Apparently the bike had been sold to a Cash America in White Center who "couldn't find the serial number because there were so many numbers on the frame". Uh huh. Someone bought the bike recently, but felt something was fishy, so they searched for it (I assume on Bike Index) when they got home, realized it was stolen, and called the police. They got their money back and Seattle Police notified us to pick it up from the pawn shop, missing the fenders, rack, and lights, but in pretty good shape otherwise..." 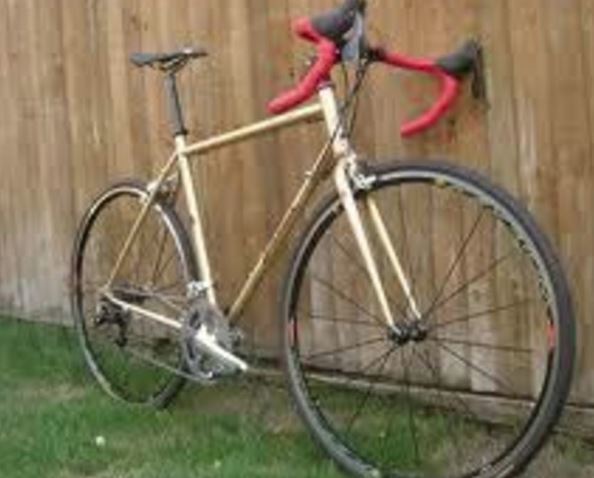 "Recovered by a Portland Police Bureau Officer ..." (No other information) 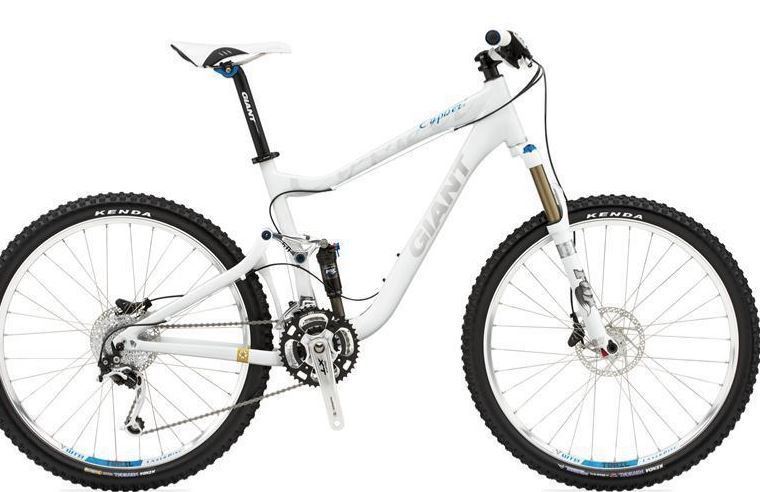 Recovered by one of Portland's Bike Gallery shops - "Looks like we have your stolen GIANT in our shop..." 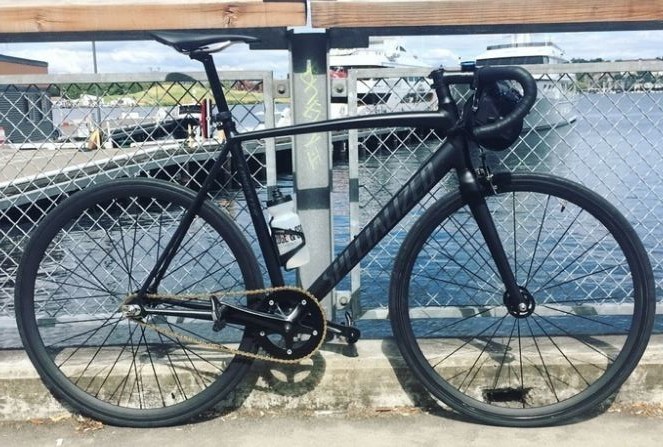 "Saw a guy with it on the street. Used my Bike Index listing to show the cops it was mine (serial #)..."

"Someone found on the street, and located us via Bike Index - thanks!" 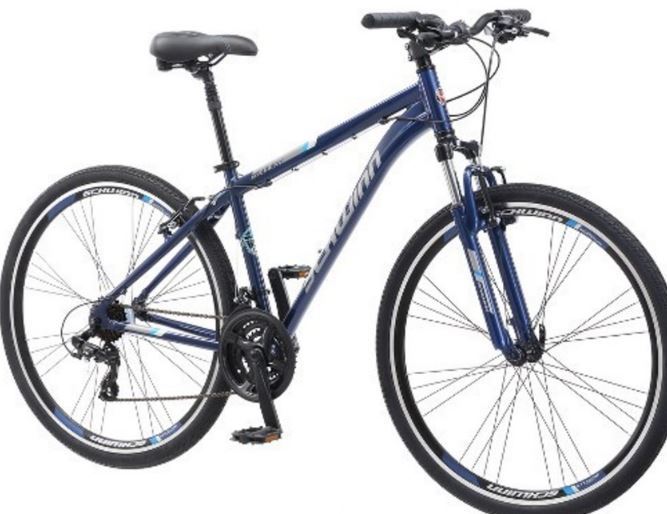 "A Seattle PD officer who was in Ballard on Friday, November 24, 2017 responded to my stolen bike post mentioning that he may have found my bike locked outside of an RV. I met him at the Ballard Public Library where I was able to confirm that it was my bike. Parts had been tampered/adjusted/switched to disguise my bike. I didn't really think that posting on Bike Index would help but I'm glad it did!" 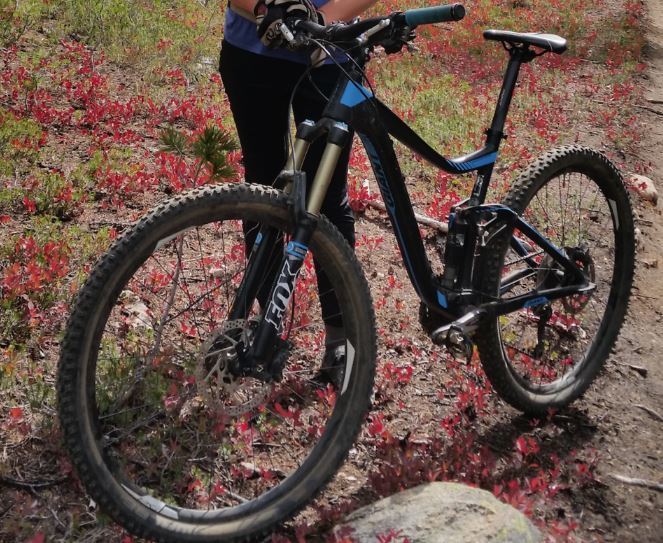 "Hello, Seattle Police Officer here. I recovered your bike 11/24/17 it will be at SPD North Precinct until Monday, then off to evidence section. You may recover it there after Monday..." 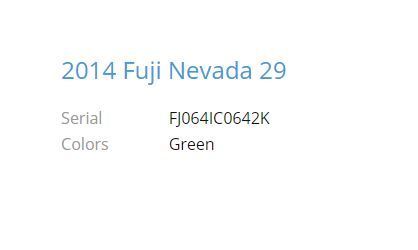 "Buyer found out that I was the owner by using Bike Index - thanks!"

The police found and returned it, though by that point it had been stripped of everything except the frame.

"Recovered by a Portland Bike Theft Task Force officer...." (no other info)

And that's a wrap for November 2017. Keep your bikes safe, folks, and we'll catch you in the next installment.