Well, 2017 certainly started out with a bang.

In addition to the fantastic and regular stories of fellow riders helping victims get their stolen bikes back, this month's roundup contains some of the best stories re: unlucky thieves with pure bad luck that we've ever come across. Keep it up, guys. :)

In January's edition, we have …

Real quick though - Want to help us out? We'd love that!<p>

Please donate to the Bike Index! We could always use your help to keep these recoveries and stories coming. We run this whole effort out of pocket, via donations from awesome folks like yourself, and we could always use some help with the bills!. You can donate here, and we would appreciate it hugely if you did. 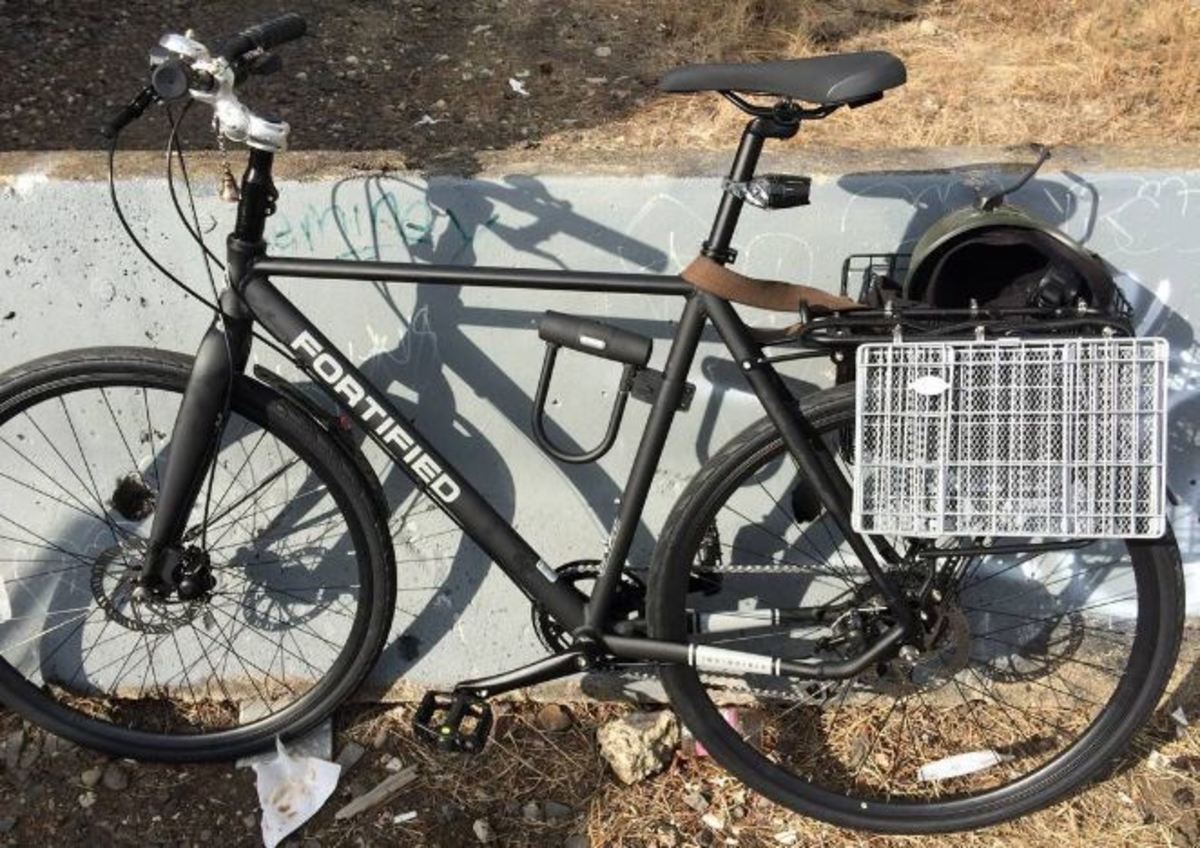 This one's interesting: Fortified Bike pitches their bikes as 'Theft Proof Bikes Made For The City' and touts anti-theft features heavily in their marketing. So when one went missing in Portland, we were pretty interested to see a Bike Index user recover it a couple of days later: Hey! I think I bought your bike. Call me! I purchased it from an individual downtown on the 27th. It's definitely the same bike (serial #'s match). (Later) The guy is legit! We set up a meet at a public place .. I'm going to catch a bus over to him right now.. 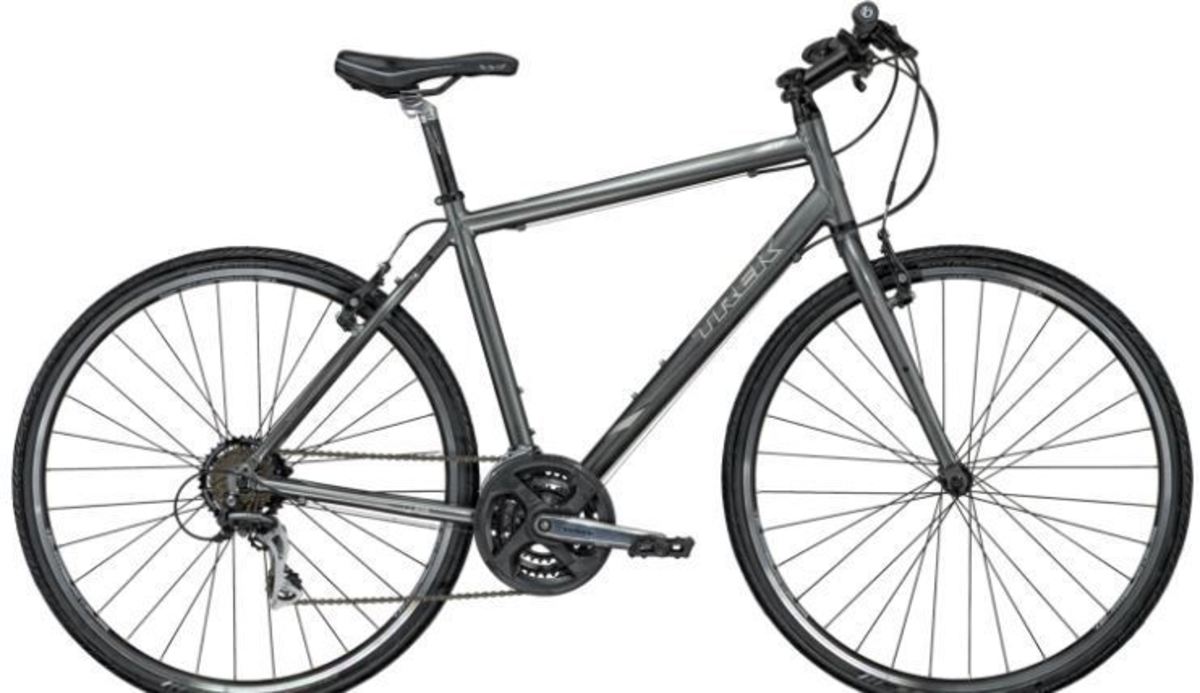 Recovered by Portland police (no other details provided by the owner) ... 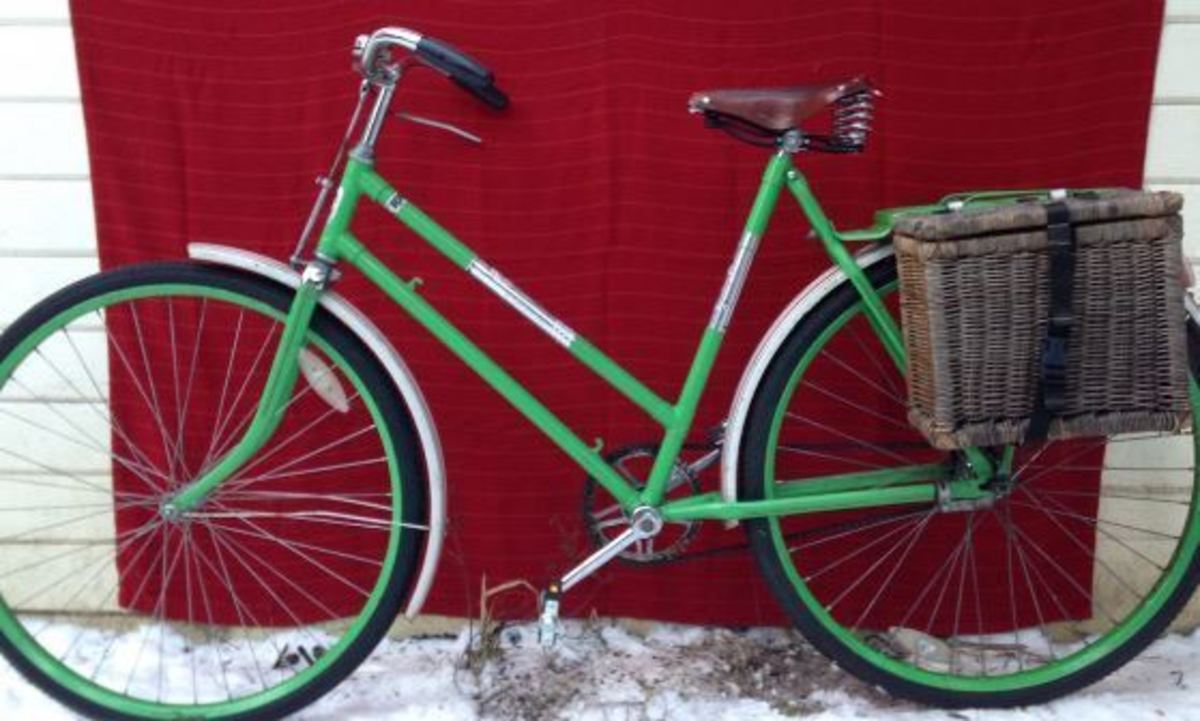 This stand-out Romanian "Pegas" was stolen from an owner who was crushed by its theft. Fortunately a local Vintage resale shop had it 'walk in', and they looked it up and found it in the Bike Index. The owner says: This bike was purchased in small village in northern Romania in 1994 on bike trip from Slovakia to Bulgaria. It is quite literally irreplaceable! Thank you! 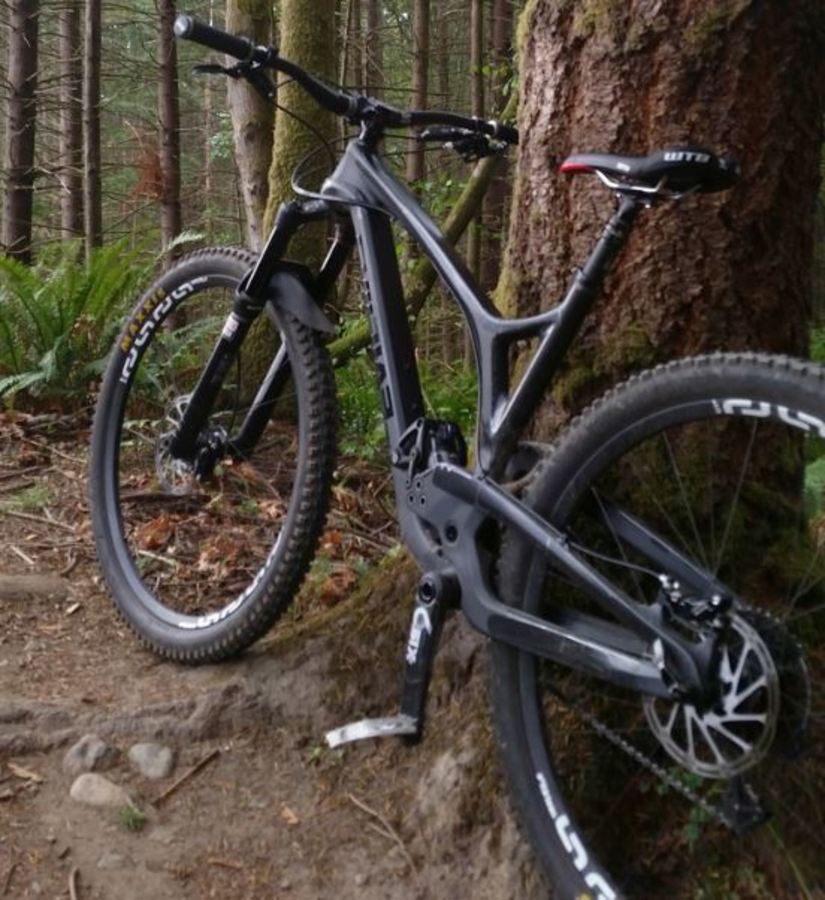 Your bike is currently on Craigslist. They changed the cockpit, but your wheels are still on it. Good luck getting it back! (Later, from the owner: I just wanted to let you know that we were able to recover the bike last night. Thanks for your assistance and services, Bike Index. We were able to set up a meeting to purchase the bike with the Craigslist seller and invited the police as well - SPD took care of everything once the bike was in view! Keep up the great work ! 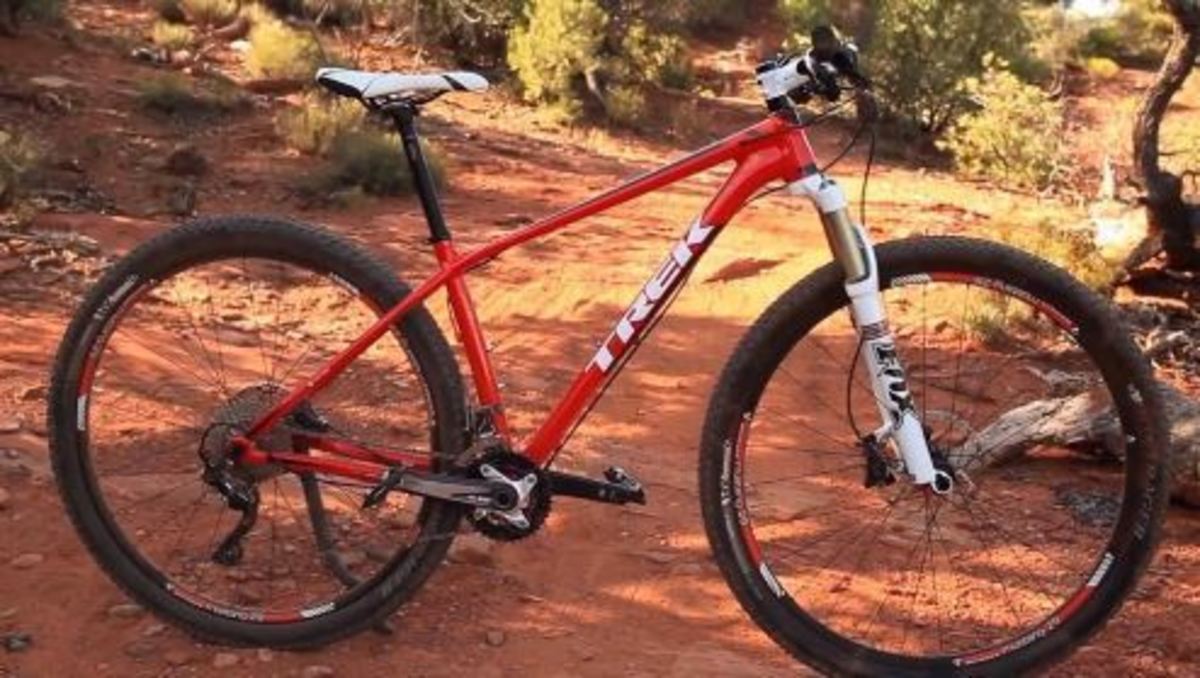 Bike shop recovered it ... the thief rode in with it to put air in the tires! 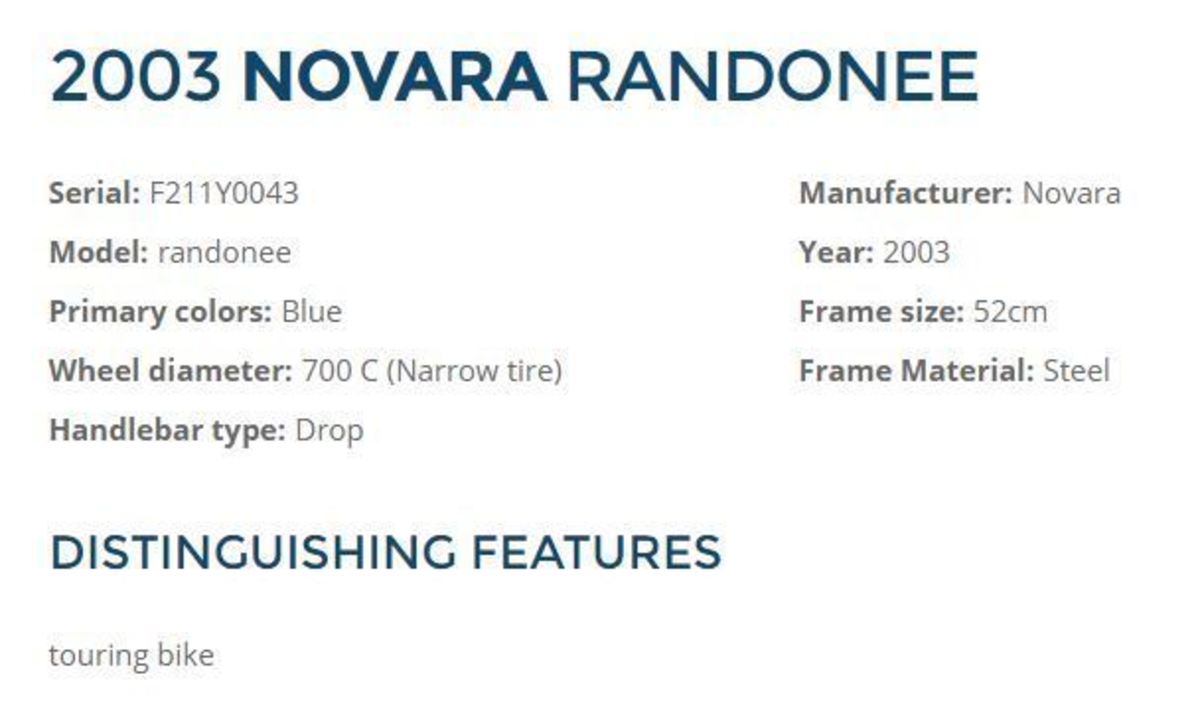 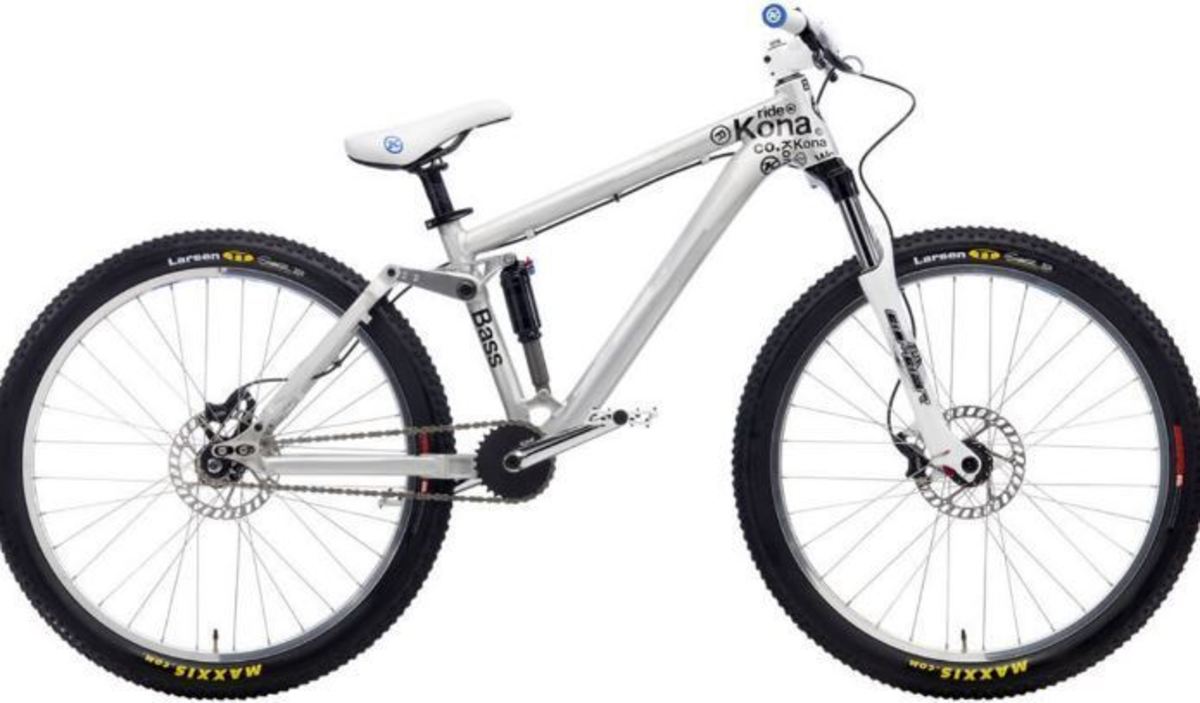 Thanks to Bike Index, over a year after my bike was stolen I got it back! Last week out of the blue I got a text from a stranger (via Bike Index) saying that: "HI! I have good news! I have your missing Kona bike. :) It was stashed behind my car last year on 11th and Republican. I searched online last summer and posted some fliers when I found it but nothing came up. It had been sitting in a closet forgotten until we moved. Today I changed a key word in Google and it came up! Let me know when/where we can meet up so I can get this back to you!" I'm so thankful to Bike Index for providing this service!!! :) 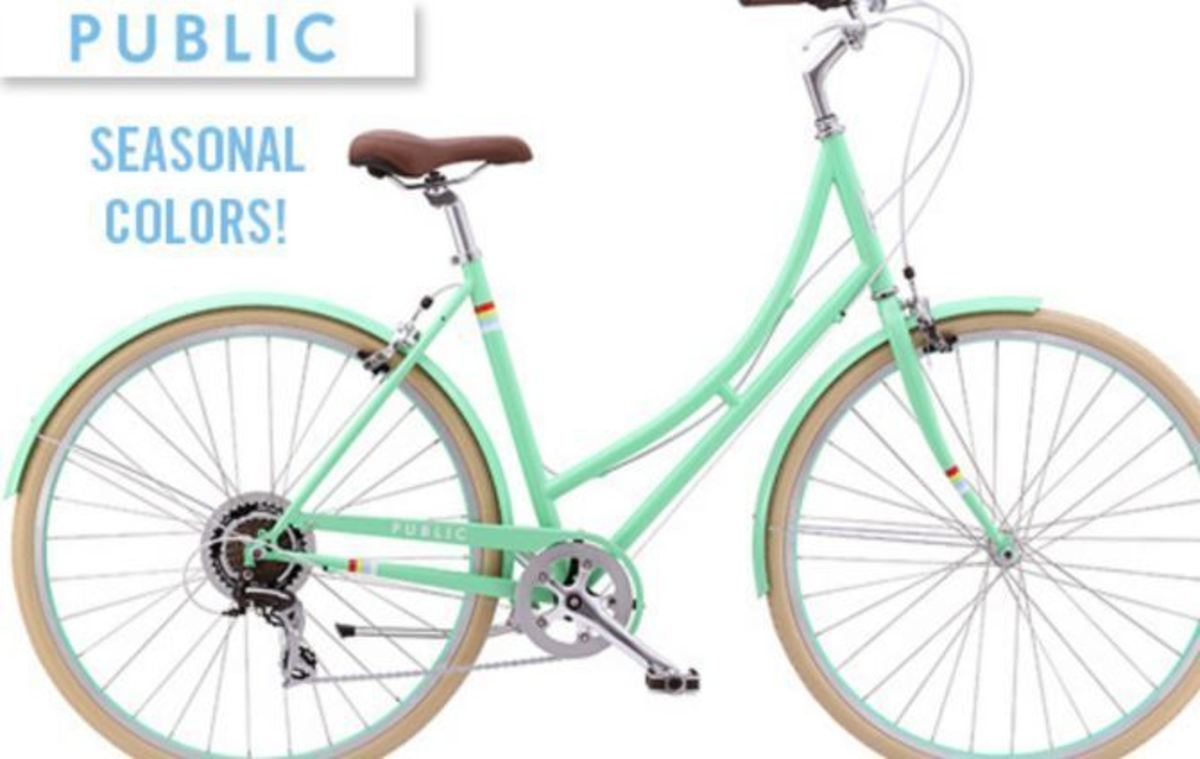 "Found in an alley on Capitol hill, called SPD and they took it into evidence - owner contacted here via Bike Index. " 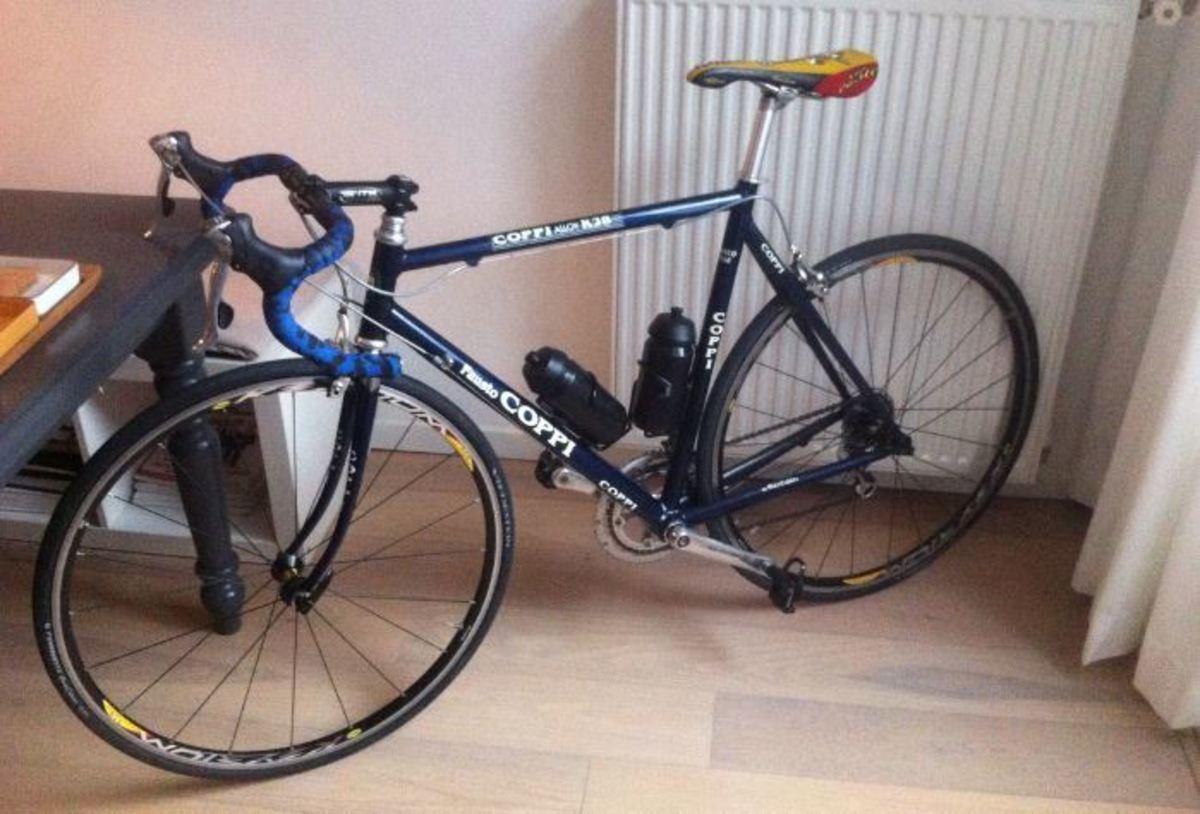 Hey ... I think I may have ended up with your bike... Some junky downtown at a max stop was selling this super nice rare bike for way too cheap so I bought it thinking I could maybe find the owner because surely whoever owned this bike was a bike lover - and it wouldn't be too hard to track them down. I checked online to see if there were any missing ads and sure enough I think I found you! (Later, from the owner:) I just contacted her to get my bicycle back!! Thanks for the Bike Index website! Great job!! 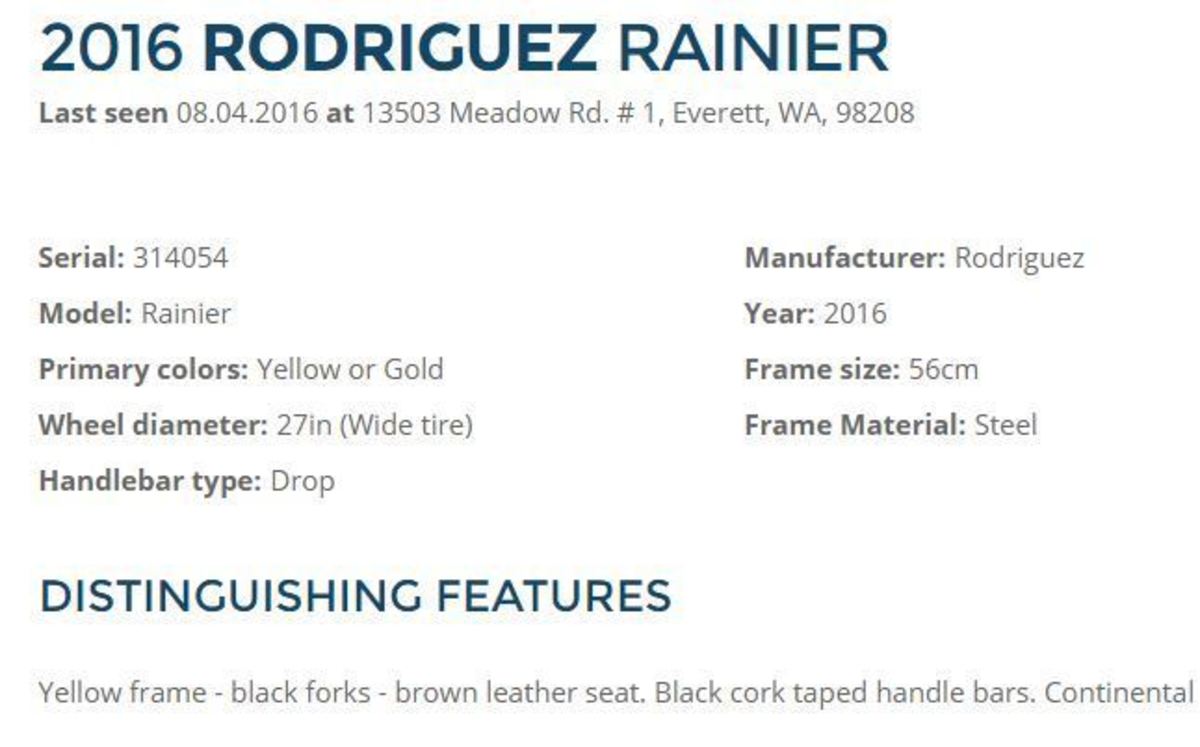 This stolen RODRIGUEZ RAINIER went from Washington State to New York - via Ebay - only to have the buyer find out it was stolen when he recieved the bike and checked the serial. Lots of red tape later, it's coming home: ' Thanks for checking back. I'll be getting the bike back. The gentleman who bought it received his reimbursement from eBay today and he says he's dropping it by his local bike shop Saturday so they can box it up and have it shipped to me.' 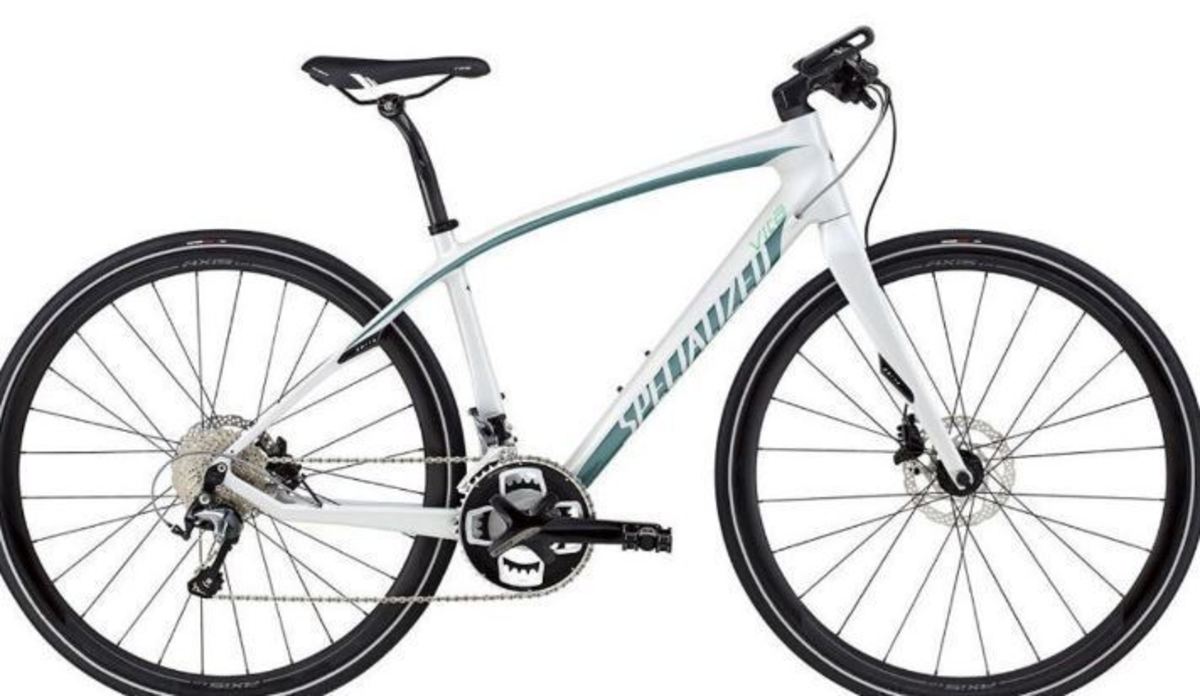 I just purchased this on Craigslist and had a funny feeling about the seller. I did a Google search and found the serial number matching to your loss ... 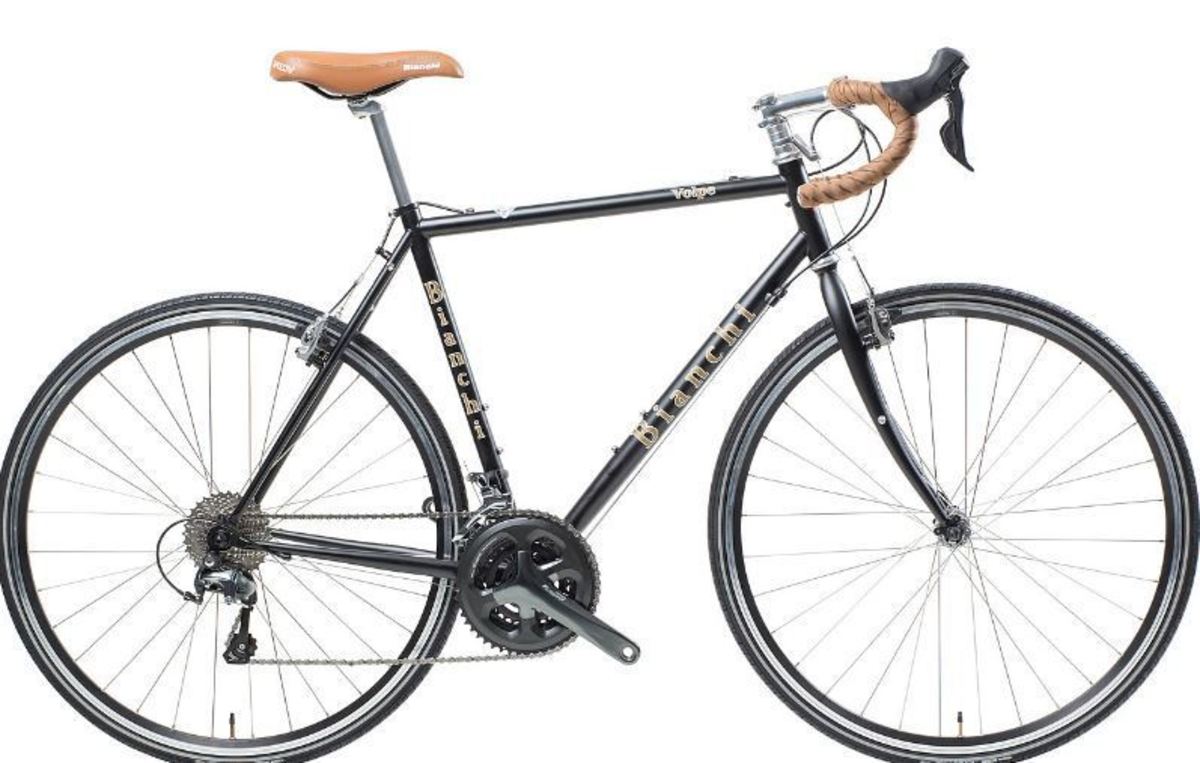 The thief who stole my bike sold it to a guy who saw my listing on Bike Index!! He called me and I went to pick up my bike. I'm overjoyed! So happy to be reunited with my bike! 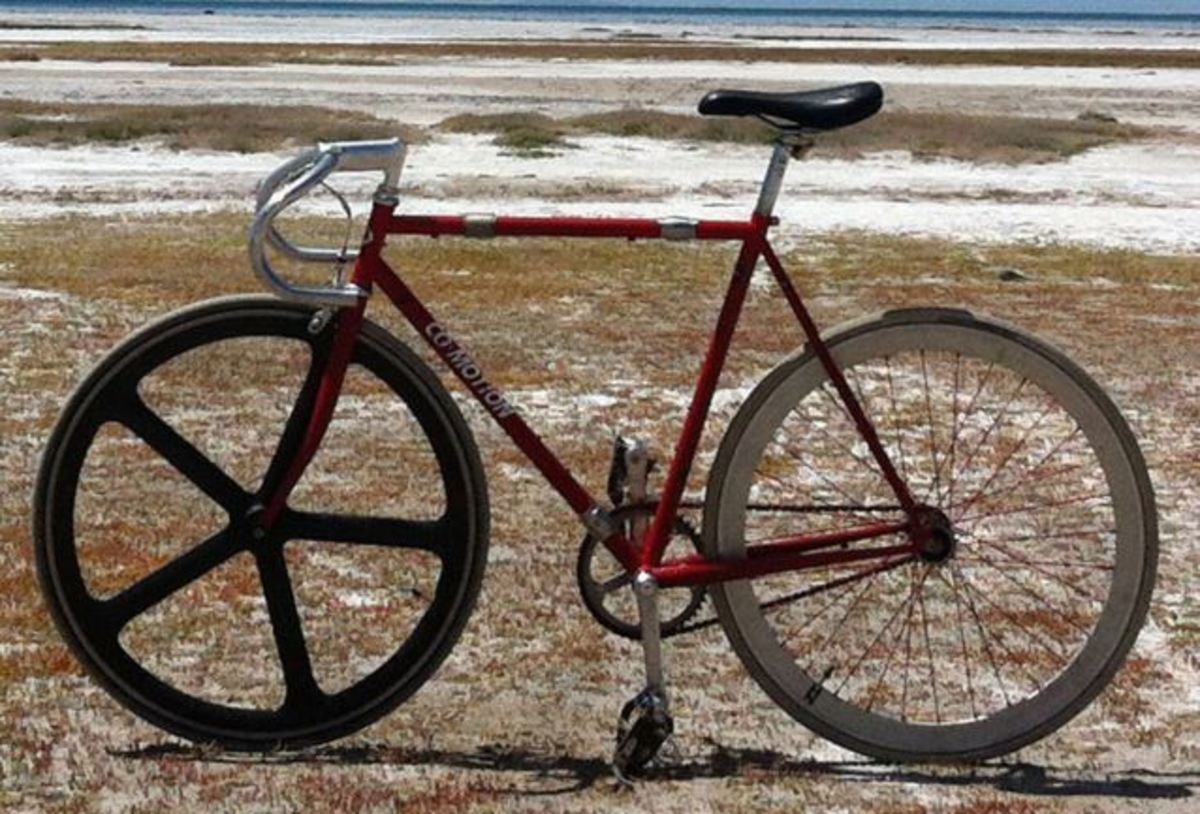 "Someone recently sold the bike via OfferUp. After purchasing, the buyer thought there was something odd about the seller being not the type of person who would build/own a custom S&S travel track bike. He looked up the bike, found it on the registry and returned it to me." 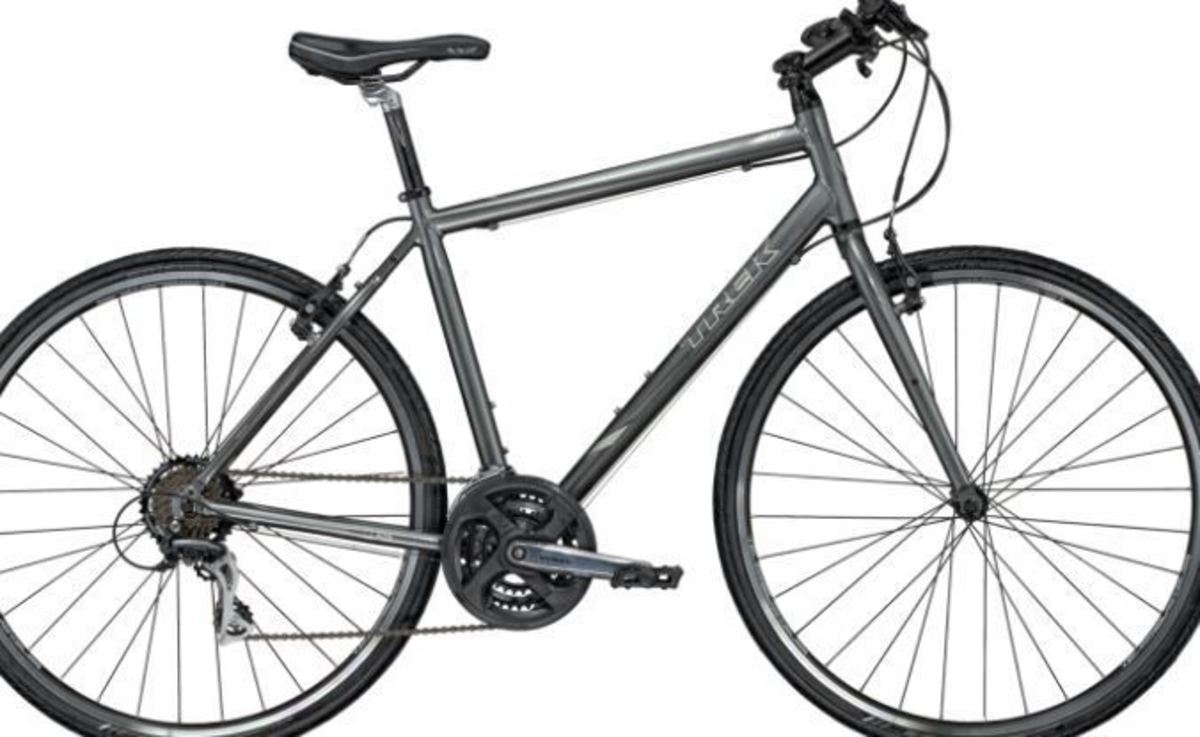 'A man out on work-release was given the bike as a loaner by a bike shop. He looked up the serial number, found it on Bike Index, and called the police!' 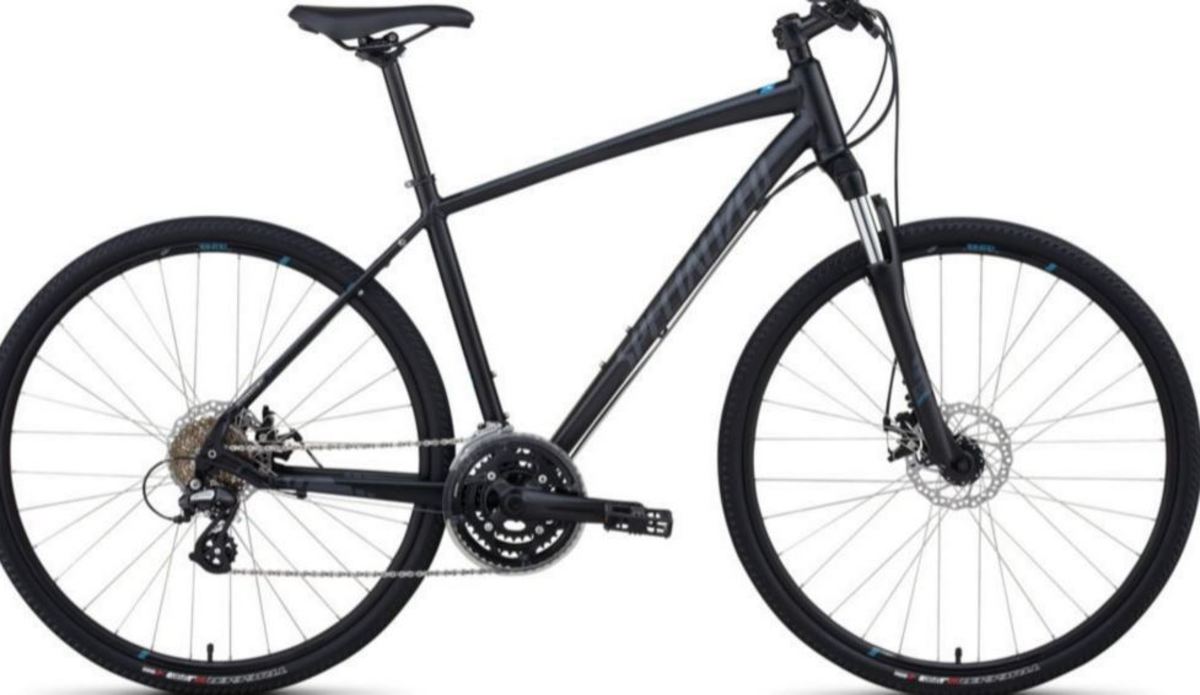 "It would appear that I have ended up purchasing your bike from someone who is obviously less than honest. I would like to get this bike back to the rightful owner at your convenience." -- (later) Hi, someone bought it from a guy off the street, looked up the S/N on Bike Index, and saw it was stolen. He’s contacted me and were sorting out a time to get it back to me... 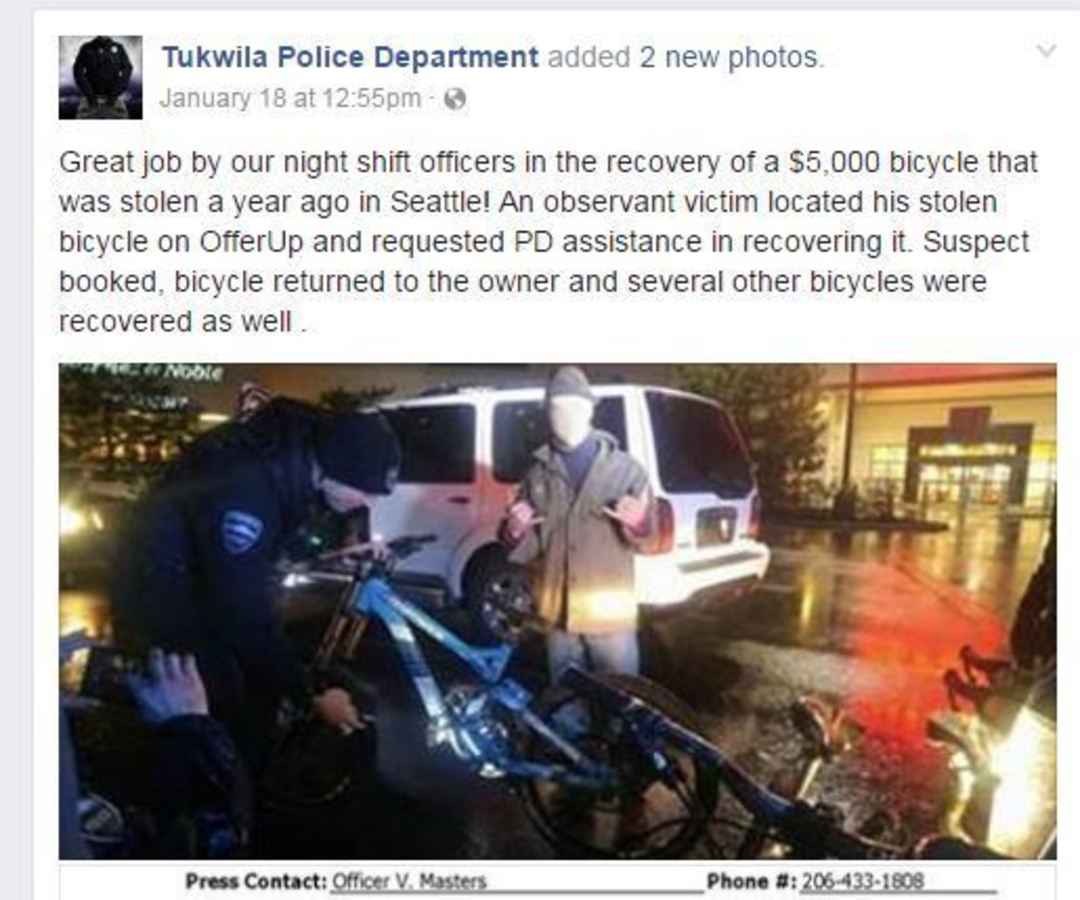 This stolen Commercial Supreme DH was spotted for sale (on Offerup, natch) and we alerted the owner, who alerted police. In a pretty epic recovery, the Tukwila PD not only busted the seller and recovered multiple bikes for this same victim - but they recovered several other bikes in the sting as well. The owner says: "The really nuts thing was that at around 5pm the guy asks me if I want a Banshee Rune too, another high end bike that was stolen from me as well. I tell him sure. So I got back my DH bike -- and my trail bike too! One year later! Couldn't have done this with out Bike Index's amazing help!!!"

From the Tukwila PD Facebook post: "Great job by our night shift officers in the recovery of a $5,000 bicycle that was stolen a year ago in Seattle! An observant victim located his stolen bicycle on OfferUp and requested PD assistance in recovering it. Suspect booked, bicycle returned to the owner and several other bicycles were recovered as well ."</i></blockquote> 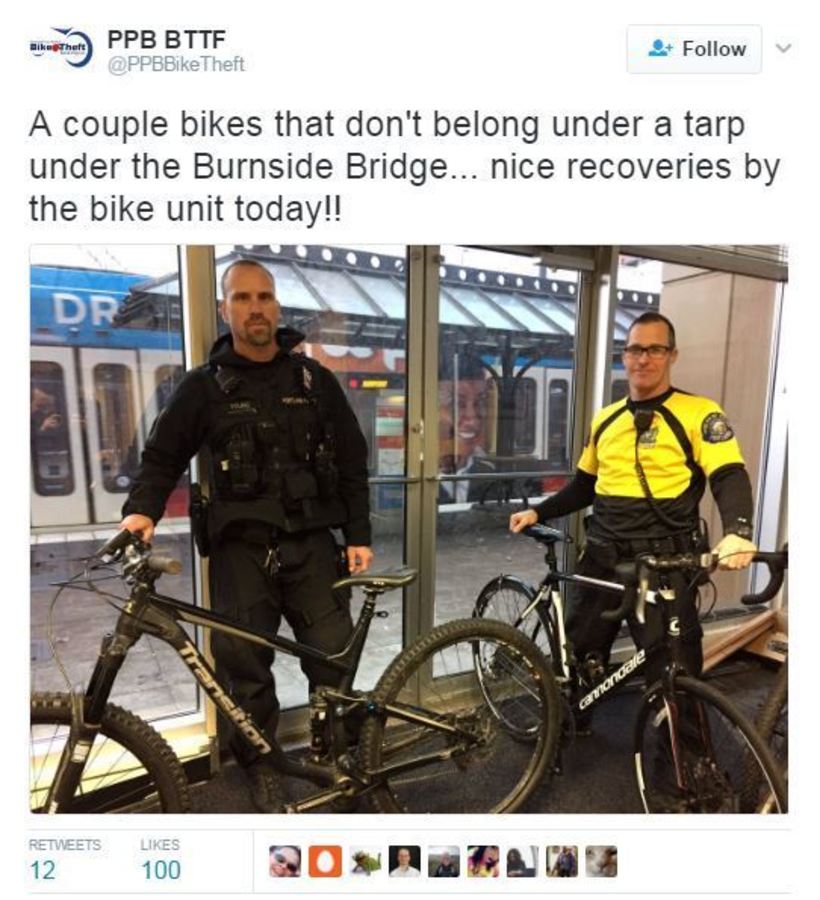 Another multi-bike recovery: Stolen from a Pearl District condo from the same owner, this stolen Transition Smugger and Cannondale Synapse were recovered by Portland's Bike Theft Task force a couple days later - still together, and still intact. "Bike Index definitely works and the officers at the Portland Police Bureau were incredible in getting these back home nearly immediately and with almost no harm. Many thanks again, I owe all of you beers!"

Hello, I just wanted you to know that your bicycle was brought into my shop today. It's a pawnshop off of (redacted). I looked it up on Bike Index to check the serial number on it and found this listing. I notified the police and they came and arrested the individual as well as confiscated your bike. It should be with Gresham PD. Hope you get it back!

Found it for sale on Offerup. Met the POS seller at a public place and took the bike back without incident. I did contact Federal Way police as soon as I verified a matching serial number but they were not able to send an officer. 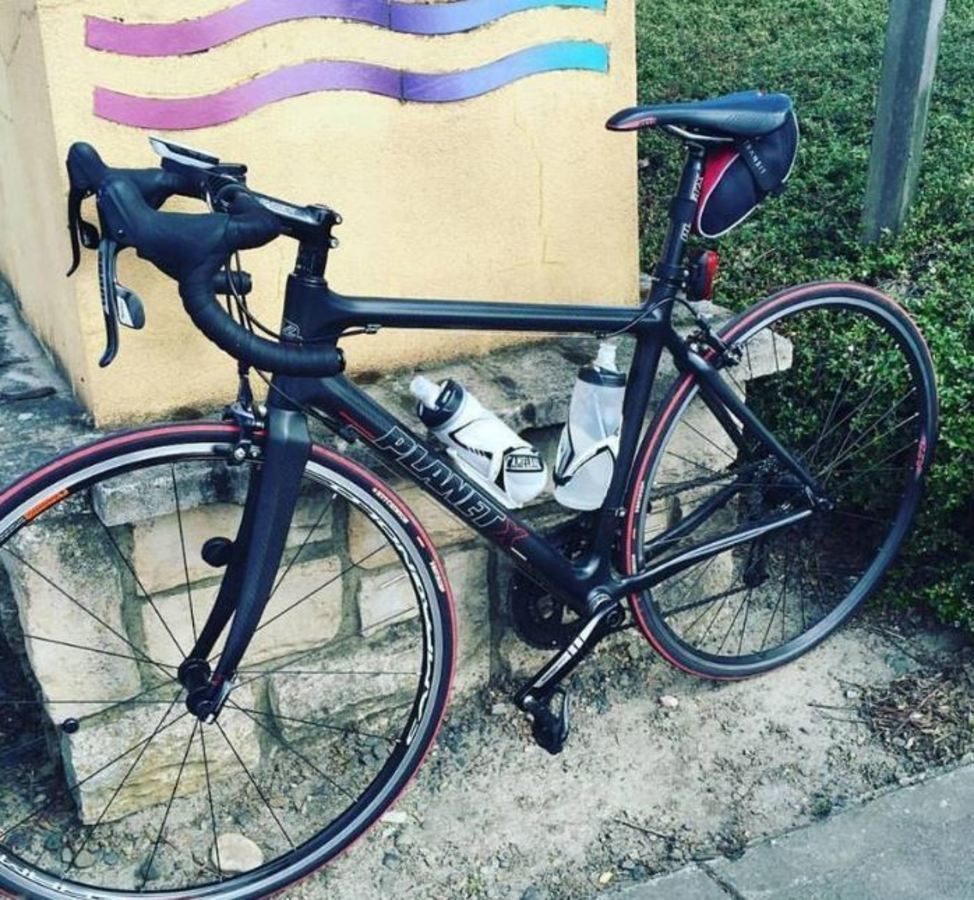 This stolen PLANET X PRO CARBON was spotted for sale on Offerup by a Bike Index user, who alerted the owner. In a stunning turn of crazy luck, the thief then brought the bike into the same shop where the owner and victim was working. Needless to say, he didn't leave with it: "Once the bike was inside the doors, I ask if I can see the bike up close and he hands it to me. I had the bike over the service desk to our mechanic and let the gentleman know the bike was reported stolen and is now considered recovered. He starts screaming about how he bought the bike, and I need to give it back to him. I pull out the packet from PPB, with the case number, serial number, and photos and ask him if he recognizes the bike in the photos. He realizes he is screwed and tries to bolt out of the store. Little does he know, the door was locked behind him when he walked into the shop. So he ends up running full-speed into our front doors and ends up on his back side in the lobby ... At this point, his story changes and he was just riding the bike around. It was his 'friend' who was the actual owner, who was outside. I let him know, he is welcome to invite his "friend" to come inside while we wait for Portland Police to resolve this matter." 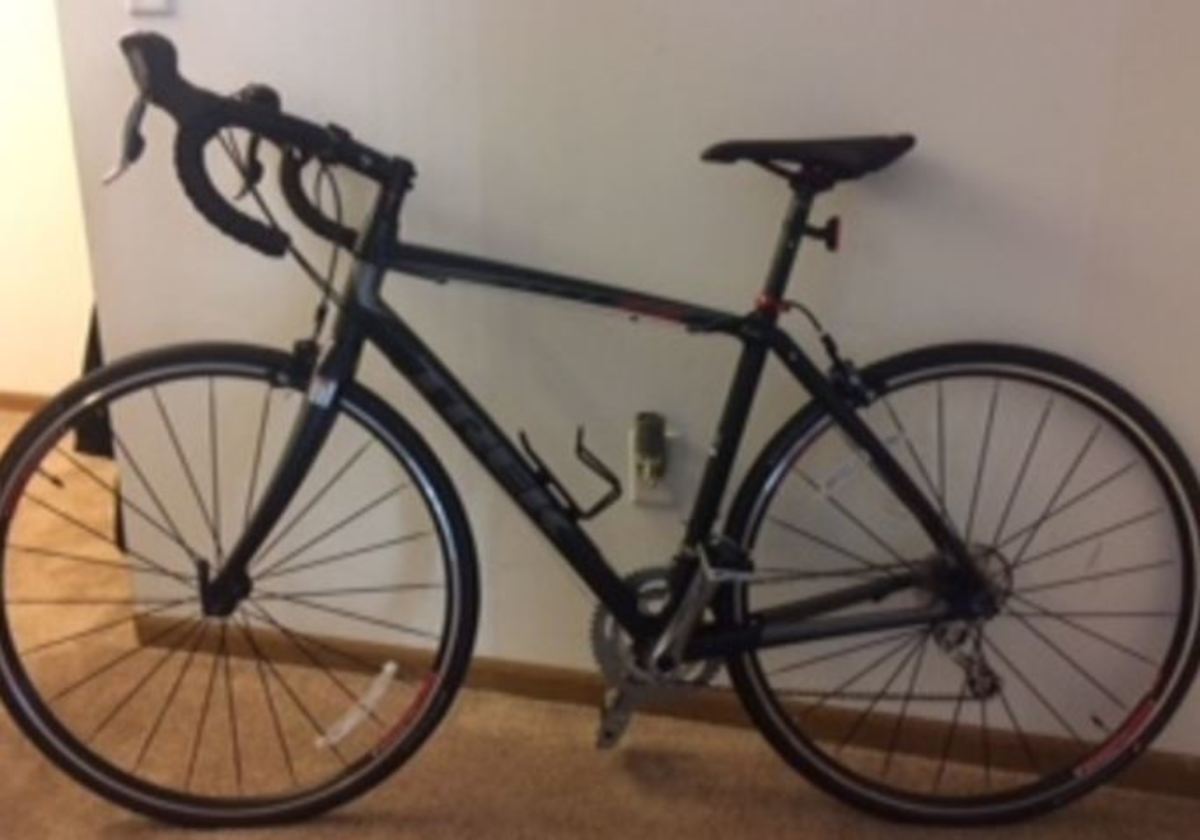 'Someone ... bought my bike from the thieves and got online to register the bike and put the serial number in -- and it popped up stolen with my contact information, so they contacted me and returned my bike to me'

'I received a call this morning from the Portland Police Department that I bike was found in the back of a stolen car, in perfect condition. Praise God. This happened one day after posting it on your website.' 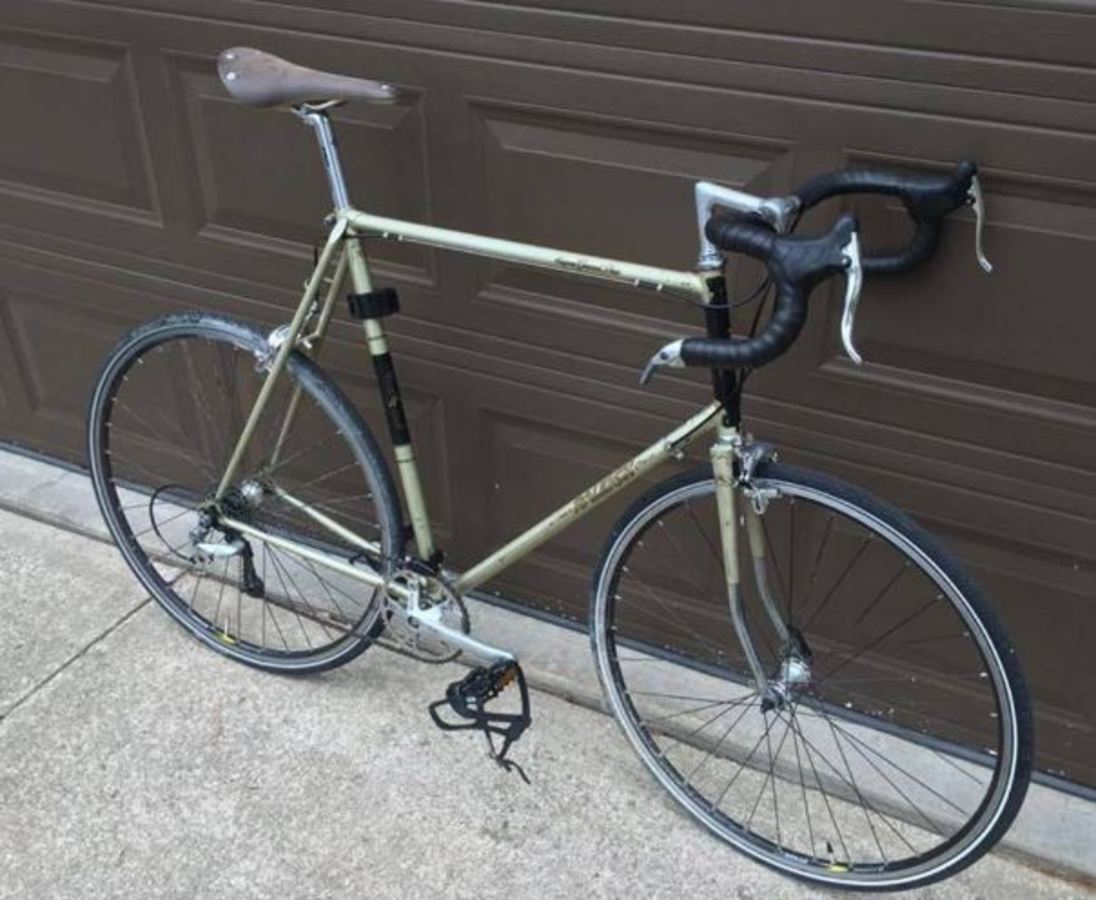 'Someone found the frame laying on the ground near my building! All most everything else was taken off the frame, but hey the frame back is something' 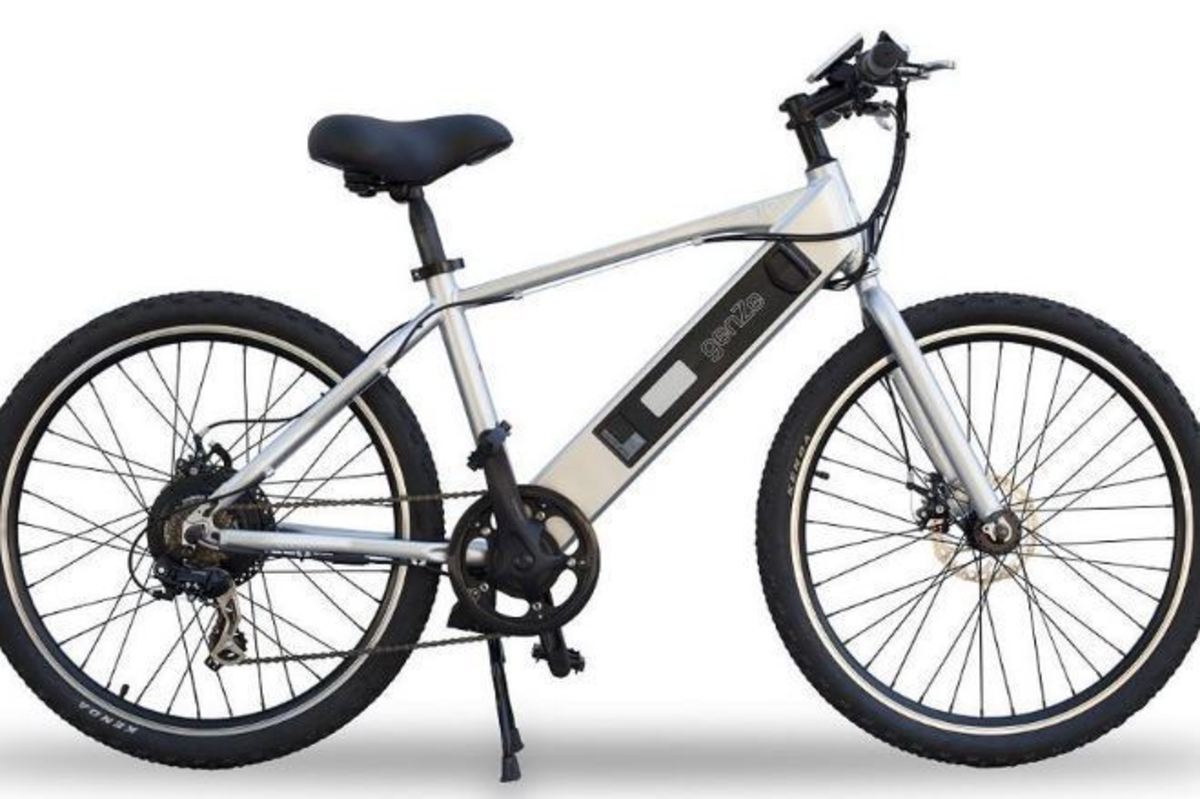 This last one is still in process with police, but it's too funny not to share - let me introduce CA's most well-photographed thief: 'The bike was dumped by a bike thief who switched it for a nicer bike in my company bike room ... this is a little bit of a weird situation because I am the product manager at (name of major security product manufacturer here) - for a new line of surveillance cameras. Our bike room is our demonstration environment, meaning we have an excessive number of cameras for such a small space, resulting in (40 minutes) of great footage of the thief.'

And that's a wrap! As always, if you like what we do and want to support the cause, we could use your help. Please tell your local bike shops and police about Bike Index, and contact us if you'd like to get Bike Index rolling in your own community. We're always here to help.

See you next month!