The Bike Index is happy to announce our newest partner - Stolen Bikes NOLA!

Stolen Bikes NOLA - a nonprofit organization committed to bike protection in beautiful New Orleans, Louisiana - is the latest in a growing list of partners using Bike Index to combat bike theft. As part of their partnership, Stolen Bikes Nola will use the Bike Index to register and protect bikes for the cyclists of New Orleans.

"With a population over 350,000, New Orleans is host to around 10 million tourists per year. Its no surprise with these numbers that a substantial percentage of the local population uses bicycles as their primary mode of transportation," said Tom Schneider of Stolen Bikes Nola. "Bikes here are not just entertainment or exercise, they are part of survival formula for the service and entertainment industry." 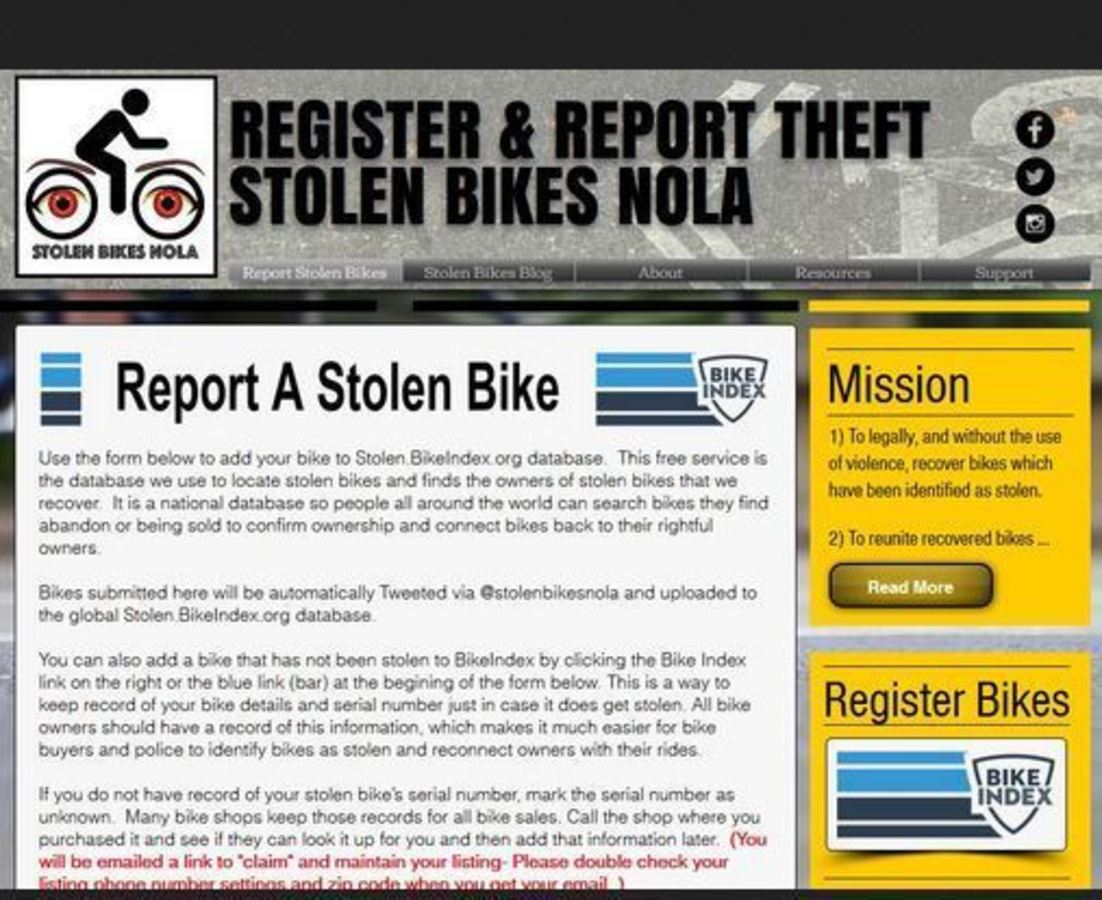 Over 250 existing Bike Index partners - cities, universities, police departments, cycling organizations, and bike shops - already use Bike Index's data to protect bikes across the U.S. With over 63,000 bikes on file and over 2,700 stolen bike recoveries, Bike Index is the largest and most successful bike registration system in the country.

According to Bryan Hance of the Bike Index, the two organizations share a lot of common history.

Stolen Bikes NOLA - which grew from a Facebook group into a nonprofit effort with high profile recoveries - has emerged as a hub for the cycling community's anti-theft efforts. Their members coordinate stolen bike sightings, bike thief tracking, bike recoveries, and are working to coordinate efforts with local law enforcement and bike shops. Bike Index brings free registration and search to this mix, along with the brand new @stolenbikesnola twitter feed - and Bike Index's long history of combating the online sale of stolen bikes.

According to Schneider, New Orleans is experiencing a spike in bike theft, and limited police resources.

"Right now, bike shops in New Orleans are required to spend time accommodating a bicycle registration system that simply doesn’t work. And NOPD estimates their force has a shortage of over 700 officers - so I feel like the community can step in and help clean up the bike theft problem," he said.

Stolen Bikes NOLA is an organization committed to the recovery of stolen bikes in New Orleans, LA. The Stolen Bikes NOLA members also try to provide a replacement bikes to bike theft victims, and are committed to working with local government, NOPD, neighborhood organizations, residents, schools & colleges to protect bikes in and around 'The Big Easy'. Contact stolenbikesnola@gmail.com for more information.