Bike Index evaluates TrackR - with an eye towards tracking bikes

I've been excited about evaluating the TrackR for a long time, and here's why:

One: the TrackR has always looked like an exciting and interesting addition to the toolkit against bike theft. It's small, fairly cheap, and looks like a nifty 'lightweight' tracker.

Two: I'm a huge nerd, and I cannot resist playing with new tools that look like they can be used to track bikes :)

If you haven't heard of the TrackR, it is "… a small, coin-sized device that easily attaches to your valuable items. With the TrackR app, (you can) locate any lost or misplaced item in seconds … using TrackR’s Distance Indicator or via Crowd GPS." (via stickr.thetrackr.com) 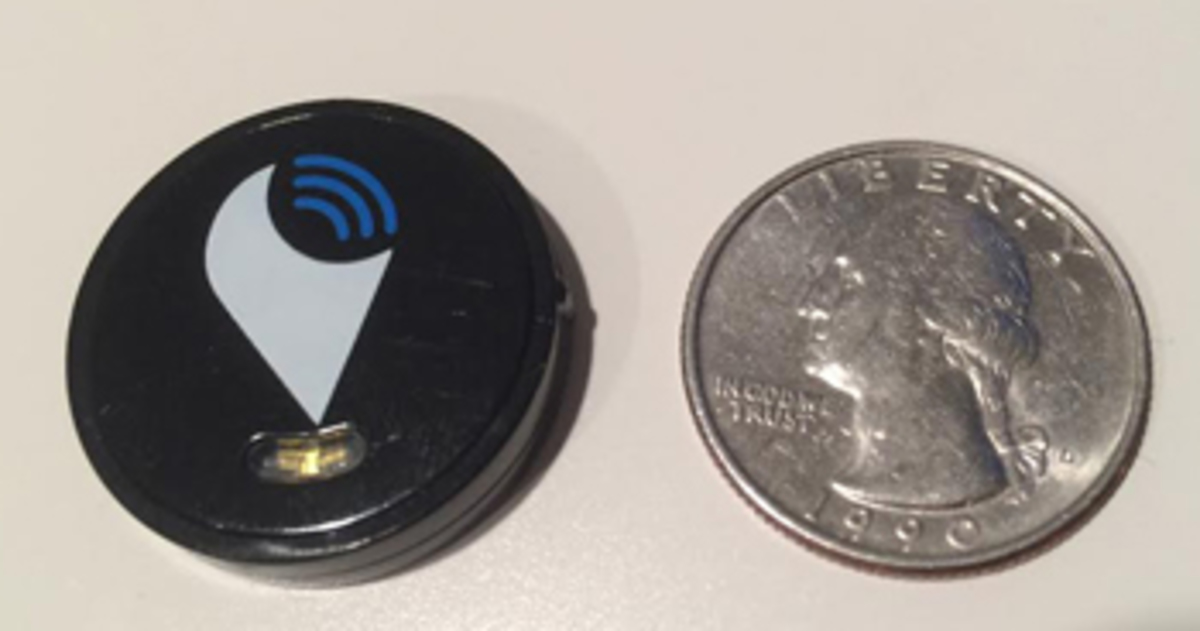 I bought my TrackR in summer of 2014, which is right about the same time TrackR started aggressively advertising itself as a stolen bike tracking solution. They also released a video (below) in which they plant a TrackR on a bike, let it get stolen, and then track it down and recover it days later.

Certain things about this video certainly raised some eyebrows, but I'll let you draw your own conclusions about the TrackR's potential for stolen bike tracking.

Unlike GPS trackers - which are power hungry, large, and hard to conceal - the TrackR's roughly quarter-sized case boasts an advertised battery life of 8-9 months and an advertised range of "about 100 feet".

The TrackR uses Low Power Bluetooth, and offloads the 'heavy lifting' - position reporting, sensing, etc. - to the owner's phone. This allows the TrackR hardware to be smaller, lightweight and energy efficient, while presenting some interesting potential via what TrackR calls "Crowd GPS".

With "Crowd GPS", TrackR has done something I've been waiting for a long time to see - they have built a distributed 'sensor network' using all of their customer's phones. They call this "Crowd GPS" - in that every TrackR user's iPhone is aware of the Trackrs around it, and will report their positions back to TrackR.

So, just to be clear: if your TrackR-enabled device goes missing, as soon as someone else running the TrackR app passes within range and picks up its location, it will pop up on the radar and report its location. This way, every TrackR user can act as a 'sensor' for everybody else's TrackRs.

The potential here is amazing, as it un-tethers the need for the device to be close to the owner's device in order to get located. There are no published numbers on the amount of people running the TrackR app, but you can imagine what potential coverage "Crowd GPS" could achieve if they can boost their numbers to a certain level of participation.

This is the sort of technology that nerds like me dreaming about at night, so I'm happy to see someone roll it out in a consumer-grade product. So, in my book, TrackR is doing exciting things and moving in amazing directions with the "Crowd GPS" network.

But enough nerdery. Let's move onto the testing:

All my tests were run with a "Stickr TrackR" model, purchased for $24.95 from TrackR's online store. I ran four tests:

Phase 2: Hiding the TrackR inside a bike frame

Phase 3: Hiding the TrackR under a bike seat

A quick disclaimer: No, I'm not an RF engineer, nor are these the most rigorous tests in the world. They are all fairly basic simple tests that I banged out in a few afternoons, but I think they are a decent representation of my experience with the TrackR so far. Yes, there are many variables to consider - signal obstruction, interference, even the metal of the frame I'm testing with here (steel, for what it's worth) but I'll leave those to other testers out there.

For now, I just wanted to get a general sense of how the TrackR performs "in the wild". If your experience differs, feel free to throw it in the comments, esp. with respect to the total distance you have achieved with your TrackR.

In my "Open air" tests, I placed my TrackR on the ground and then tried successive 15, 30, and 42-45 foot 'sound the alarm' tests. The goal was to test the signal range.

The results? I was only ever able to get about ~42 feet of working distance out of my TrackR.

In the video below: At 27 and 36 feet, the TrackR works fine - again, just sitting on the ground. At 42 feet, though, I'm unable to connect. Thinking that I might have been getting some signal loss because of its location (on the ground) I then the TrackR to some string and suspended it about 3 feet off the ground, about at hip level. I was then able to get 42 feet out of it, but that was the max.

Anything past 42 or 43 feet, though, failed. This range falls well short of the "about 100" advertised by TrackR – but it still presents amazing potential as a tracking device. If every phone running the TrackR app within 45 feet of my bike can still 'see' my TrackR, I'm still pretty happy.

So - in short - while I'm a little disappointed I couldn't get the total advertised distance out of my TrackR - a 42 foot detection range still has a lot of potential. If you have performed similar tests and received better range, let me know below, please.

Phase 2: "Hide the TrackR inside a bike frame"

My second test involved hiding the TrackR inside of a bike frame. I was particularly interested in this scenario because most bike thieves will chop a bike soon after stealing it, so having a TrackR hidden in the frame would provide all kinds of potential advantages for post-theft, 'post-chop' tracking.

In this test, I taped my TrackR to some string and lowered it inside a bike frame. I then attempted to connect to the TrackR to track it. Long story short - it doesn't work at all. In all of my tests, the moment you drop a TrackR down a bike tube, it ceases to communicate with the app and this renders the TrackR untrackable.

Honestly, this is not too surprising: low power bluetooth is just that - low power - and it shouldn't be surprising that a low power signal can't penetrate metal. While the optimist in me was REALLY hoping to at least get a foot or two of detection distance out of my TrackR, to my disappointment, I did not. Ah well …

Phase 3: "Tape the TrackR under the seat"

In phase three, I hid the TrackR under my bike seat - I just taped it there with electrical tape - and ran the same distance tests from Phase 1, testing the "sound the alarm" function at 15, 30, and 42 feet.

Happily, the TrackR still performed well when taped under the seat at the ~42 foot range. I consider this a success! Not only was there is likely some added interference with the placement underneath the seat, but again - I still think 42 feet of sensing distance has a lot of potential.

With this on my mind, I then spent a good half hour trying to find other sneaky locations on my bike to hide my TrackR. The most promising - as a sort of fake endcap to my handlebars - didn't work because the TrackR was just a couple millimeters too wide. Still, though, with some more time I'm sure I could come up with pretty ingenious places to hide the TrackR.

In this test, the goal was to test how useful the Crowd GPS is, by leaving my bike outside to see if and when the 'Crowd GPS' would flag its location. I taped the TrackR underneath my seat and parked my bike in a relatively high traffic area of downtown Portland - on a workday - and checked my TrackR app every hour to see if and when it had been located.

The results? The bike sat outside from 8am to 5pm, and sadly it never popped up on the radar. Every time I checked, it hadn't been located by any other TrackR users. Yes, this was only a one day test, but it was still a little disappointing. But I still have hope: the more TrackRs get shipped out, the more people will run the app, and the better the network will get. I plan to test this out a few more times in the future.

Two quick thoughts on this:

1) I wish TrackR would publish some sort of stats on the TrackR 'crowd gps' network - i.e. how many TrackR apps are live out there, looking for other TrackR's, how many crowd sensor hits are happening, etc.

EDIT: @thetrackr pointed out on Twitter that they do publish some of the Crowd GPS view here: http://www.thetrackr.com/#crowdgps

2) Hey, TrackR - free idea here - gamify the tracking a little bit! Give TrackR app users some reason to leave the app running in the background by awarding 'most TrackR's seen this week' or something like that. Or hide TrackR's out in the wild that, when sensed, result in a giveaway, etc. Give people a reason to run the app all the time, basically.

All in all, for ~$25 the TrackR presents some very interesting potential for bike tracking/sensing. There are so many scenarios where having a TrackR hidden on or in a bike would be a huge advantage, for example:

… and so on. There's a lot of potential there - maybe not all the potential I wanted, but, hey - it's the first year the TrackR is on the market, and I'm excited to see where the TrackR goes and what advancements they can make to the device in their future versions.

Please let me know about your own experiences with the TrackR in the comments below, and thanks for reading. :)