Bikes rule in the Netherlands

What do you think of when you think of the Netherlands? Windmills? Mathieu van der Poel? A sophisticated dikes and levees system? Orange? Beautiful farmland?

I think of bikes. A place where everyone rides a bike: people getting to work, people getting groceries, people wearing skirts, people wearing sandals, people not wearing helmets, cats, dogs, babies on bikes. Cycling in the Netherlands isn't just hyped up online to make the U.S. feel bad about being car-centric. Bikes in the Netherlands are a BFD (big deal).

I visited the land of the Dutch in September for a bike race. I was unsurprised with the difficulty of the racing given that it was my first time racing in Europe. But I was surprised with how actually truly bike-friendly the country was. Transportation in the Netherlands centers around the bicycle and public transportation. This is done through infrastructure that caters to the bicycle and a general sense of respect for the bicycle as a valid mechanism for getting from place to place. 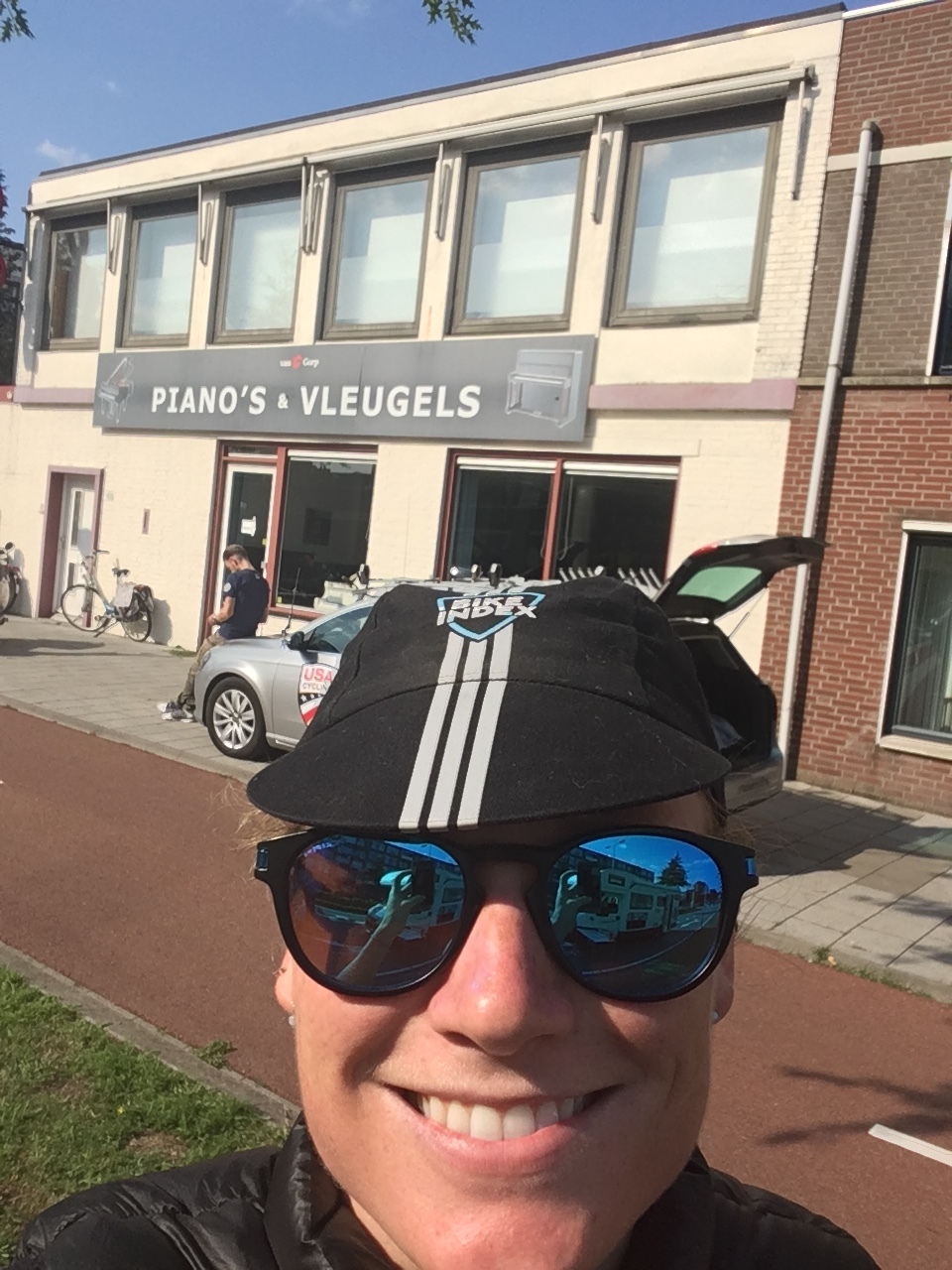 Via a complex network of bike paths and trails, cyclists in the Netherlands can get to where they need to go in an efficient manner, but they are also protected from traffic that is bigger, faster, and potentially dangerous, such as cars and buses. There are traffic signals exclusively for bikes that indicate when it's safe to cross roads, and many of the paths that run alongside roads or sidewalks are painted in red to make it obvious where bikes belong and other users do not. In many cases, the bike paths parallel streets, but concrete barriers protect the path from the road. And many of the roads in the Netherlands are super narrow, forcing cars to pull of to the side of the road to let a cyclist or car coming from the opposite direction pass.

I have to admit that the infrastructure confused me a little bit. I was decked out in my race kit, clipless pedals, garmin, and fancy sunglasses, trying to get a workout in, and commuters with handbags and heavy, single-speed bicycles were taking my inside line on paths and flying by me in intersections. It was awesome. Not wearing a helmet seems to be the norm on the bike paths. The cyclist isn't expected to armor up to get where they need to go.

When I was flying home, out of Brussels (Belgium), I had to drop my bike bag in an oversized luggage area, where I wondered aloud whether the bike would be safe. A travel companion told me that there's such a reverence for bikes in the country that no one would steal or damage the bike in the airport. Whether or not that's actually true, the sentiment demonstrates the huge difference between cycling culture in the U.S. and in many parts of Europe, where cycling has existed as a huge sport and functional mode of transportation for decades.

Infrastructure in the U.S. is dominated by car transportation. To ask cars and bikes to co-exist on the same roads can be rough at best. And when a majority of car trips in the U.S. are under 10 miles, and when I can commute eight urban miles faster on a bike than in a car, you have to wonder whether we're doing it right. In the Netherlands, 30km commutes are feasible by bicycle. Cycling isn't something for losers who don't have cars in the Netherlands. It's just a cost-effective and efficient way to get around.

This cultural difference could also help explain why the Netherlands is such a force on the world professional cycling circuit. Across cycling disciplines, the Netherlands is a global powerhouse. Kids in the Netherlands learn to ride young, and opportunities to ride, learn, and train safely on the paths are available to everyone. In the Netherlands, everyone rides. So many Dutch citizens get a cycling 'tryout.' Their talent pool is huge.

All of this is to say, bikes rule in the Netherlands. It's worth seeing. Bike share companies are the closest thing I have seen in the U.S. to cycling's availability in the Netherlands - many a work dude rock the suit and dress shoes on a Divvy bike in Chicago, and that warms my heart. But heck, y'all, let's learn from the Dutch and legalize… ride more bikes!

Have you ridden somewhere with awesome cycling infrastructure? Send us a tweet @BikeIndex about your experience.